TROUBLE was brewing in a small corner of Central Africa 55 years ago.

A series of civil wars in what is now the Democratic Republic of Congo were wreaking havoc in the impoverished country. A United Nations intervention force quickly moved in.

Part of that force was Ireland’s first-ever international military deployment – an all-Irish contingent of United Nations peacekeepers made up of 158 men.

They were there only to keep the peace. But when troops loyal to the Prime Minister of the secessionist state of Katanga, Moishe Tsombe, descended on their compound in dusty Jadotville, any illusion as to the true seriousness of the men’s mission quickly filtered away.

The Irishmen of ‘A’ company held out for four days on low ammunition, food and water before eventually surrendering in the face of overwhelming odds and exhaustion. By then, they had killed at least 300 of the enemy. Not one Irishman died.

The little-known events of those four days in September 1961 are quickly becoming the stuff of legend, thanks in part to the release of a new Hollywood film focusing on the men’s exploits – The Siege of Jadotville. But the affair wasn’t always a chapter of Irish history so famed.

The story of Jadotville was for decades a shameful tale of two battles – the siege itself, and the long struggle for recognition that came afterwards.

“It took 55 long years for us to be recognised,” says Mr Hegarty, who now lives in Coventry but in 1961 was a fresh-faced 17-year old private in the Irish UN force.

“A lot of guys didn’t live to see that. But it all came about by people writings books and various things, letting the public know what actually did happen out there. That we were given a raw deal.”

That it certainly was. The officer in charge of the company, Commandant Pat Quinlan, wasn’t even alerted to a UN operation in Elisabethville, which had upset the already unreceptive Katangese and risked pushing their hostilities beyond breaking point. 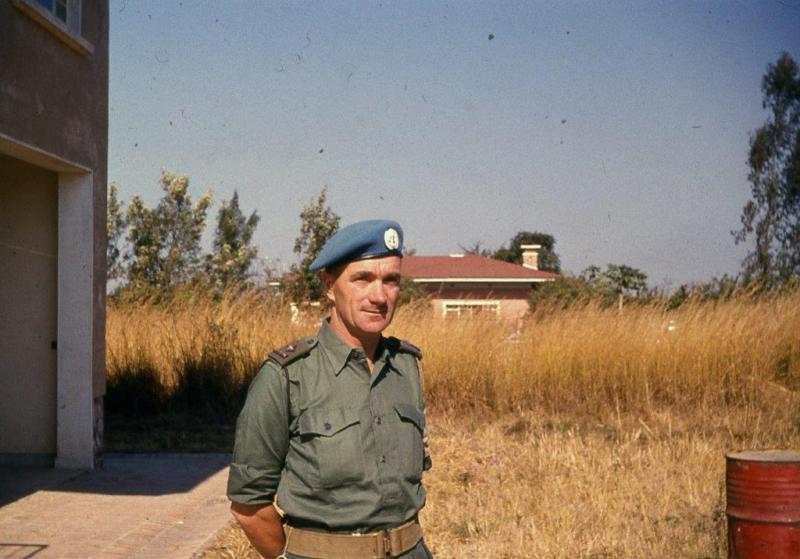 Commandant Pat Quinlan in Jadotville shortly before the siege (Picture: Courtesy of Leo Quinlan)
As for their supplies, the Irish were woefully under-equipped. They had a single truck, two jeeps and lacklustre radio equipment. Their Vickers machine guns and 60mm mortars paled in comparison to the Katanganese’ 3,000 men and air support.

Fully aware of their precarious position prior to the siege, Commandant Quinlan ordered his men to form a defensive perimeter, dig trenches, stockpile food and water and to never be without a weapon. A raw deal indeed.

But Mr Hegarty isn’t hung up on those ghosts anymore. Just last month, he and his fellow veterans were presented with Presidential Unit Citations at a ceremony in Athlone. The presentation was the first in Ireland’s history.

With the failings of the past put to bed after so many years, Mr Hegarty is keen to finally reflect on the true battle of Jadotville.

On the morning of September 13 1961, Henry Hegarty was on perimeter duty. At 17-and-a-half years of age he hadn’t yet acquired a taste of real combat. But that was about to change.

As many of the men attended an open air Mass service, Hegarty was one of the first to spot enemy forces converging on the dusty compound. He distinctly remembers shouting “attack, attack!” as the first bullets whistled by.

“It’s funny when conflict like that happens,” he explains. “Your mind changes. You’d have to be in a situation like that to understand it. It’s a ‘them or us’ mentality that sets in. Where courage comes from I do not know, but it comes to you.” 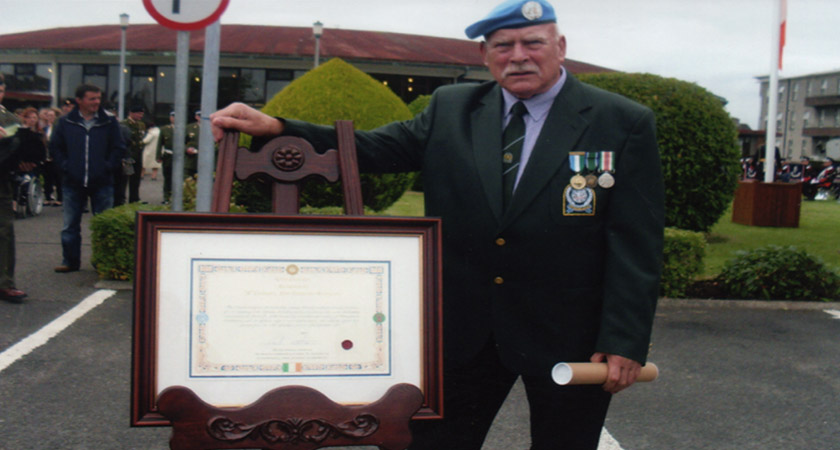 Mr Hegarty was awarded a Presidential Unit Citation last month Picture: Courtesy of Andrew Hegarty)
The dugouts Commandant Quinlan had ordered his men to dig quickly came in handy as enemies moved in all around.

“We were out in the open, out in the blazing sun,” Mr Hegarty remembers. “They were coming from all directions. They had a hill looking down on us. So they had a good enough view.”

What ensued were four long days of grueling trench warfare. Mortars didn’t stop landing after nightfall. The enemy’s Fouga jet strafed them every few hours. A chaplain even gave the men last rites in their trenches as death appeared to close in. Mr Hegarty remembers exactly how he felt.

“We truly thought that was it," he says. "The end had come. But that made you stronger, somehow. We had no ammunition. We had no food. It got quite horrendous at one stage in the game. Mortars were still coming in at night. Snipers were about.

“But you had to sleep at some stage in the game. If there were two of you in a foxhole one was on guard while the other got a few hours’ kip. It was very hard to sleep anyway. It was just complete exhaustion if you did close your eyes.”

In the new film – which was officially released on Friday, October 7 – Commandant Quinlan is played by Belfast actor and Fifty Shades of Grey star Jamie Dornan. According to Mr Hegarty, Dornan has a lot to live up to.

“Pat Quinlan was one of the finest commandants I have served under. He was a great, great leader. There’s no question about that whatsoever. And a great man.” 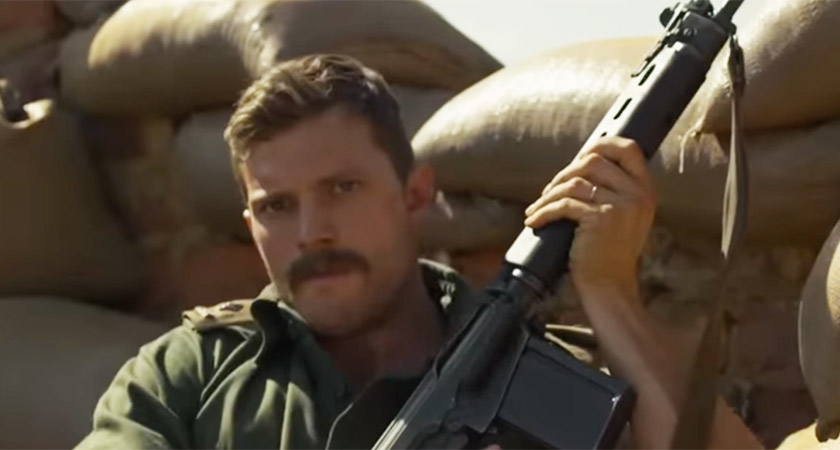 Jamie Dornan in The Siege of Jadotville [Picture: YouTube]
When the exhausted Irishmen were eventually captured after four punishing days caught between enemy fire and the African sun, Quinlan was forced to negotiate for the lives of his men.

Hegarty certainly doesn’t look back on the month or so he spent in captivity with any great fondness.

“It was a bit horrendous after we were taken prisoner,” he explains. “We had actually killed quite a lot of their troops. They could’ve decided it was a ‘you killed our men and we’re going to kill you lot’ type thing.

“But Commandant Quinlan was a very good negotiator. He made sure that everything was going to be done right before we did surrender. There was nothing else he could do about it other than fight to the death.”

In the aftermath of the battle, pictures circulated of the men’s bedrolls which were mistaken for body bags. Their families were convinced the men had perished. In the confusion, a diplomatic battle ensued to bring them home.

When they eventually did return to Ireland, the story was for one political reason or another swept away from public view.

Pat Quinlan died in 1997, years before he and the rest of A company received the recognition they deserved. With the release of the new film, millions will now know what Pat Quinlan's men knew about him all along.

As for Henry Hegarty, he moved to Coventry in 1963 where he has lived ever since. He went on to have four children, four grandchildren and one great-grandson with his wife Rose.

But a part of Jadotville always stayed with him.

“You hold it in for so long,” he explains with an air of relief about him. “It’s nice to talk about it. It eases things.”

Asked whether he would attend The Siege of Jadotville’s official premiere in Dublin, Mr Hegarty revealed that he had elected instead to stay indoors to watch the film with his family.