Mica scandal protestors outside the Irish Consulate in Edinburgh

SCOTTISH friends and relatives of Irish homeowners, who are victims in a scandal over defective concrete brickwork causing their houses to crumble have staged a protest outside the Irish Consulate in Edinburgh.

The group were backing a massive campaign in Ireland – where thousands of people are facing financial ruin and homelessness ­ – and are demanding the Irish Government pay the full cost of rebuilding their homes.

Protestors say the Irish Government failed to properly regulate the production of the concrete brickwork, which contain too much of a mineral called Mica used as aggregate in the building blocks.

Too much Mica in a concrete block will cause it to crumble as water seeps in.

Regulations state that a concrete building block should only have a maximum of one per cent Mica, but tests carried out on brickwork in some homes show that Mica levels were as high as 17 per cent.

A huge demonstration has already taken place in the centre of Dublin after the Irish Government said they will only pay 90 per cent of rebuild costs and homeowners will also have to pay the €6000 it costs to carry out tests on their house’s brickwork. 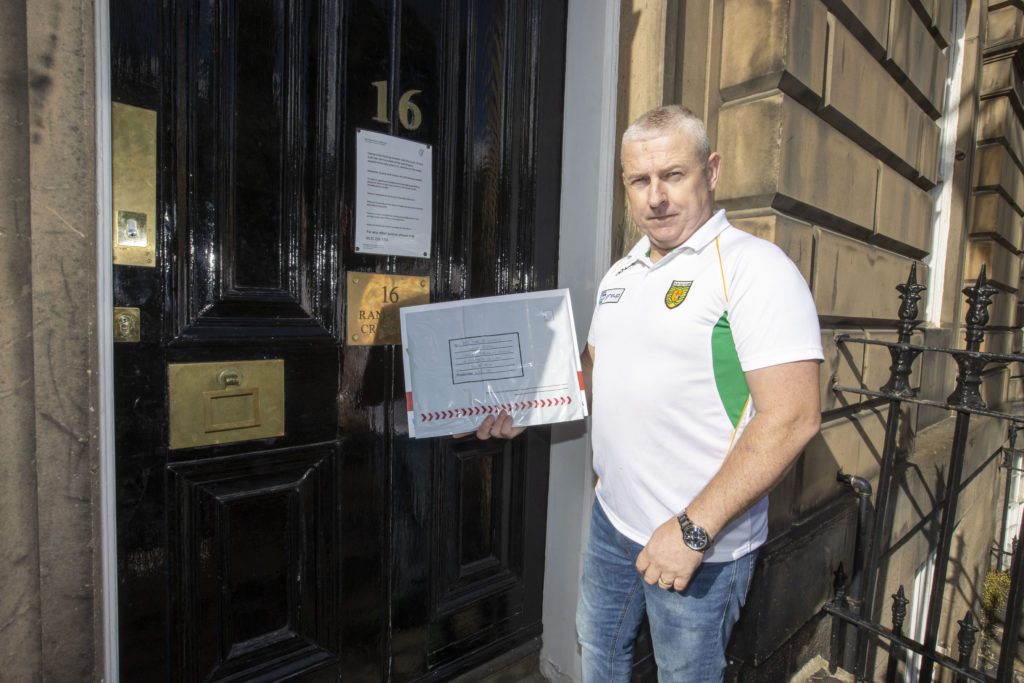 Protest leader Andy McGrath at the Irish Consulate in Edinburgh

The #100percentredress protest in Scotland was organised Andy McGrath – a builder based in Paisley, who has family in Ireland whose home is affected by the crumbing brickwork.

He said: “This is a scandal of huge proportions that has caused untold grief and heartache to people whose homes are affected by these defective concrete building blocks.

“There are many thousands of first, second and third generation Irish people living in Scotland who have family and friends whose lives have been turned upside down because their homes are literally falling down around them.”

He added: “In Donegal alone where I have family, there are more than 5000 homes which have become uninhabitable because of the excess mica in the brickwork.

“We have seen a massive campaign in the Republic to try to force the Irish Government to live up to their responsibilities by giving the people affected 100 per cent redress and pay the full cost of rebuilding.

“It’s the least they can do after the Government failed to properly police the regulations around the manufacture of this type of brickwork.

“The current Government’s stance of only offering to pay 90 per cent of rebuild costs is all the more galling when a similar issue of pyrite in brickwork was discovered in Dublin, the Government gave these homeowners 100 per cent redress and covered the total rebuild costs.”

Mr McGrath led the group who handed a letter of protest in at the Consulate General of Ireland in Edinburgh this week.

“We may be across the Irish Sea here in Scotland, but we will stand shoulder to shoulder with those campaigning for the Government to pay 100 per cent of the rebuild costs to the innocent victims of this scandal,” he said.

“We handed in a letter of protest to the Consulate General of Ireland, in Scotland asking the Consul General, Jane McCulloch to relay our anger and determination to continue campaigning on behalf of our families and friends in Ireland to her Government in Dublin.”

Police 'likely to have colluded in blacklisting construction workers'