A DOCUMENTARY illustrating the lesser known details of the notorious ‘Troubles’ of Northern Ireland will air its first episode tomorrow night, 10 September.

The seven-part documentary series begins with a 90-minute episode describing the lead-up to the arrival of the British Army to Northern Ireland in 1969, including the two communities’ suspicions of each other leading to unrest and eventually sectarian violence. The first episode also promises new information about Martin McGuinness’s role at that time.

Entitled “Spotlight on the Troubles: A Secret History”, the documentary series as a whole sets out to explore previously unknown evidence, which includes documents, film footage and testimony from key witnesses. 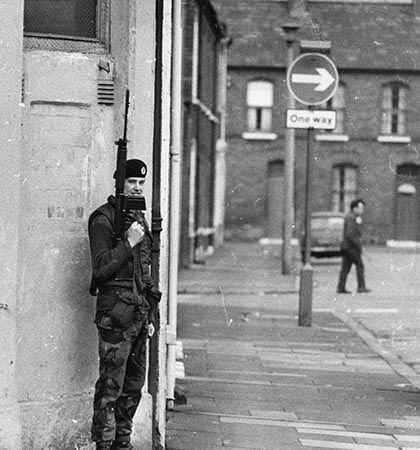 circa 1972: A British soldier stands guard on a corner in the Shore Strand Area of Belfast. (Photo by Evening Standard/Getty Images)

The documentary has been commissioned to mark the 50-year anniversary of the arrival of the British Army on Northern Irish soil, an act which is widely regarded as being the starting point of the 30-year long conflict which resulted in over 3,700 deaths.

The first episode will air at 8.30pm tomorrow on BBC Four & BBC One Northern Ireland, and will also be available to view on BBC’s iPlayer service shortly afterwards.