Opinion: Time for Celtic to deliver on the European stage

IT'S been a busy few weeks at Celtic. The main talking point off the field is the rumours of a rift between players and management, which prompted supposed crisis talks between the parties.

In the mix of all that there was almost a fantastic win in Amsterdam, but the eventual 2-2 draw got Celtic off to a good start in the Europa League nonetheless. Things went from pretty bad to just about alright with that result.

Celtic should have seen the game out last Thursday, but to take away a point from a game I expected them to make a complete show of wasn’t too bad at all. It was followed by the 6-0 demolishing of Dundee at the weekend, which was exactly what the fans needed to raise spirits.

Norwegian side Molde FK are now sitting at the top of Group A after a surprising 3-1 win over Turkish side Fenerbahçe, who Celtic face next Thursday. Should the Bhoys get a decent result at Celtic Park next week they will be well placed in the group and, to be honest, I’m quite surprised by that prospect.

Meanwhile, newspapers last week in Scotland reported that Ronny Deila had “crisis talks with players” regarding their form in the league and about how serious they're taking it. As they say, you shouldn’t always believe what certain media outlets print, but if it’s true then that’s an even bigger worry than I had first imagined.

Aberdeen are still rampant in the Scottish Premiership, with @CelticFC currently five points behind pic.twitter.com/41mBcRNxa2

Social media, and in particular Twitter, seems to have calmed down since Celtic’s 2-1 loss to Aberdeen – and I include myself in that. I wasn’t happy with the result and was critical of Deila. I still am, and I feel a draw against a decent side in Ajax has somewhat covered over the cracks, but fans seem somewhat content at the minute.

I’ll be heading over to the Fenerbahçe game next Thursday and it looks set to be an interesting encounter and, as usual with Celtic, I’m expecting an amazing atmosphere. Fenerbahçe will be eager to make amends after their shock opening defeat though.

This will be Celtic’s first encounter with the Turkish side, and I suppose the one to watch is Robin van Persie, who has come up against Celtic before while with Arsenal in the 2009/10 UEFA Champions League play-offs.

Although the Europa League wasn’t what the fans wanted, Celtic have been given interesting ties; glamour ties that you would normally associate with the Champions League. The only problem is they come without the huge financial benefit. That said, the money generated from the Europa League is not too shabby at all.

My first major memory of supporting Celtic was around the time of 2003 and, of course, that year included the run to the UEFA Cup final, which a lot of Celtic fans will admit was both the greatest and worst time of our lives. 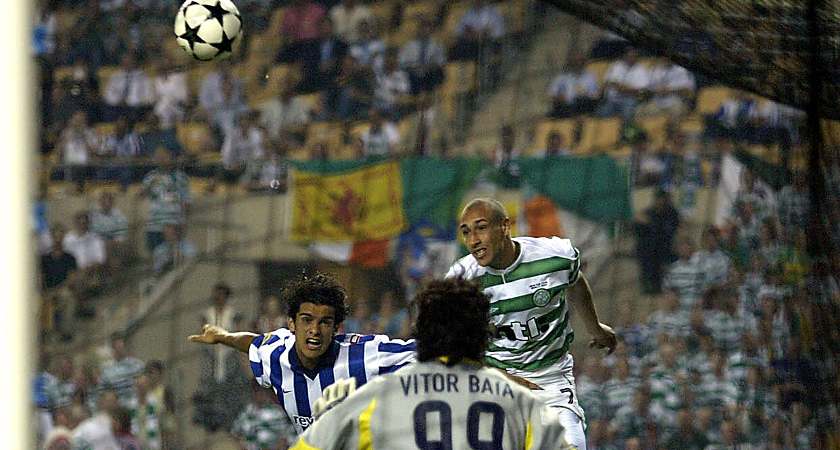 Henrik Larsson of Celtic heads his first goal during the 2003 UEFA Cup final [Picture: Inpho]
A very good Porto side, managed by José Mourinho, ruined the final for us, but the competition brought with it many, many highs and just the one low. But still, to this day, I refuse to watch any footage of the game that ended 3-2 after extra-time in Porto’s favour.

A decent run in the competition again is exactly what the Celtic support will be looking for this year and there’s no reason why we can’t. As fans, we are told we “expect too much” when missing out on the Champions League, but dropping it down a level should see Celtic prosper that bit further, one would hope.

With our group hosting some decent fixtures, the supporters can only hope that the players will finally rise to the occasion and deliver on the pitch in Europe. The league is a cert, and that’s with no disrespect to Aberdeen, who have been playing a blinder so far this season.

But Celtic need to shine on another level; for me that should have been the Champions League, but with that not possible now I fully expect the Bhoys to give it a good go in the Europa League.

Things look slightly more positive after Celtic’s opening game of the competition but, having said that, I’m still mindful of the issues Ronny faces with the team’s indifferent performances.