KEVIN THE Carrot is back in stores for Christmas, and for the fourth year running people are completely losing their minds.

Aldi's ad mascot Kevin (who is a carrot, if that wasn't clear) first made an appearance in the German supermarket chain's 2016 Christmas adverts in Ireland and the UK, and obvious marketing campaign though it was, it worked-- really, really well.

Now there's a whole litany of side characters, like Tiny Tom the Tomato and Russell Sprout the... well, you can guess.

Every year Aldi release the Kevin the carrot plush toys in the run-up to Christmas, and every year grown adults queue outside the supermarket before it even opens, and while it hasnt exactly devolved into fisticuffs, there is a lot of shoving, panic and fustration in the  other grown adults in the adventure to get your hands on the elusive soft carrot.

@AldiUK Just happened to be in Aldi buying kitchen towel at 8am. Ok, I admit it, I planned an early dash to acquire the greatest collection of carrot family characters. And sprouts have never been so popular, got the last one in store! 😅🥕🍅#KevinTheCarrot #RussellSprout pic.twitter.com/IVQ6YkQ0Ix

Plus, as soon as the toys sell out (Which doesn't take very long AT ALL) they show up on E-Bay, sometimes for hundreds of euro. (If you do this, you are Not Sound At All).

The supermarket have branded the release day for the Kevin the Carrot plush toys as 'Orange Thursday', an obvious nod to America's Black Friday, where people queue for hours and resort to physical fights for cheap TVs and games consoles, but here we do it over a carrot.

Carrot frenzy in greenock @AldiUK this was it calming down! #KevinTheCarrot pic.twitter.com/wHDJlzJIrs

There goes any semblance of moral high ground we had, then.

This year's 'Orange Thursday' was yesterday, November 28th, and already Aldi have announced that they are limiting each customer to two Kevin the Carrot toys per person, to give more people the chacne to buy one and to try and prevent any Gladiator-like scenes in the aisles.

DSo how did this year's Orange Thursday go down in Ireland and the UK? Have a look for yourself...

Scenes in every Aldi across the country today #KevinTheCarrot pic.twitter.com/XcibSEenBF

Got to mine at 7.30 which had 7 people there. By 7.50 queue was very long. 8am doors opened and as we chatted whilst waiting we helped each other out getting what we wanted as late comers started to push n shove #orangethursday #KevinTheCarrot pic.twitter.com/oF8zLaRqkn

Me at 7.30 in the queue: ‘We are definitely not getting a giant carrot’ Me at 8.10: ‘Has Katie got her belt on?’ 😂 #KevinTheCarrot @AldiUK pic.twitter.com/HuyYr7iTZd 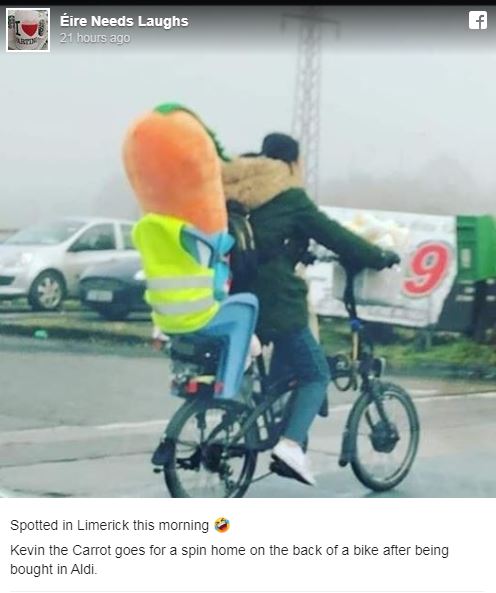 Forget #Brexit, by-elections and everything else, there was only one priority for me this morning:

Joined the queue outside @Aldi_Ireland #Cobh this morning at 8.40am and got my 2019 #KevinTheCarrot shopping done! pic.twitter.com/7rHodxRCSq