WARWICKSHIRE GAA are celebrating after rescuing the future of their facilities in the West Midlands.

Last week, Highways England announced their preferred route to build a relief road off junction six of the M42 – right through one of the pitches at Páirc na hÉireann in Solihull.

The local GAA community had feared the plans would spell the end of one of Britain’s main GAA grounds – but Highways England have offered to build a new, state-of-the-art clubhouse at a new site of the club’s choice.

They have also offered to safeguard at least two pitches for continued use while construction of the relief road gets underway.

Páirc na hÉireann’s pitches cater for Warwickshire GAA’s 3,000 members and are the primary facility for GAA tournaments in the Midlands, with 15,000 players using the grounds annually.

“We were expecting a battle, but Highways England have been incredibly progressive in securing the facilities that we have and have clearly done their homework on just how important the GAA is to the Irish in Britain,” Mr McLoughlin said.

“We launched a very positive publicity campaign which won cross-party support in Westminster and got as far as the Irish Embassy in London and Ireland’s Department of Foreign Affairs in Ireland.

“Páirc na hÉireann is incredibly important both to the local community here and the GAA community nationally, and we’re just delighted that Highways England are working with us to secure its future.” 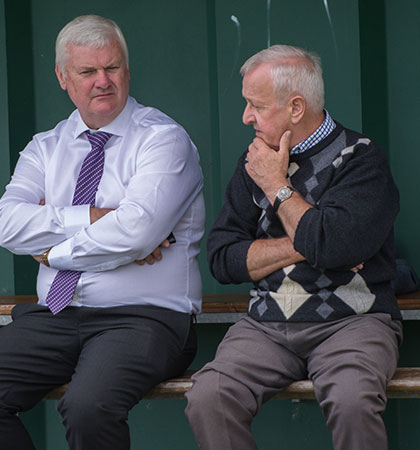 Vice chairman Noel McLean said he met with Highways England last week and that the discussions were “overwhelmingly positive”.

He added: “We will be moving but the other option was the death of Páirc na hÉireann and that just wasn’t going to happen.

“Highways England are going to give us a new clubhouse with modern changing rooms as well as two new pitches.

“We can move somewhere nearby and they’ll give us full planning permission to rebuild, but we may have to move further down the road away from the airport to comply with floodlight regulations.

“But the future is really up to us. And for a while there it didn’t seem like it would be.”

Tara Tolan, the county board’s press officer, said a weight had been lifted following the news.

“We’re still very early in the process but this secures the future of GAA in the Midlands so we’re delighted,” she said.

“We can’t thank those who helped us enough, people like Conor McGinn MP who have really supported our cause.”

Reacting to the news, Mr McGinn, Labour MP for St Helens North, said: “This is a relief. We wait to see the exact details of what Highways England are proposing but things sound very positive.

“It’s testament to the work of Warwickshire GAA’s county board as well as the standing of the GAA in Britain today.

“This will hopefully mark a new era for Páirc na hÉireann, and we can use this unexpected opportunity to ensure state-of-the-art playing facilities for the Irish community in Britain.”

He added: “Alongside the redeveloped McGovern Park in Ruislip, I think we can now say that we will have two facilities here in Britain which will rival any county Gaelic sports facilities at home in Ireland.”

Warwickshire GAA say they hope to conclude negotiations for a new replacement facility within the next 9-12 months.

“Whilst it will be disappointing to leave our current site of 28 years, we will benefit from a brand new and improved facility and we would like to thank The Irish Post and all of the Irish media who have promoted our campaign,” added vice-chair Mr McLean.

“However, the hard work must continue on from here.”