Jacob Stockdale of Ireland shows dejection after the Rugby World Cup 2019 Group A game between Japan and Ireland at Shizuoka Stadium Ecopa on September 28, 2019 in Fukuroi, Shizuoka, Japan. (Photo by Stu Forster/Getty Images)

Japan served up one of the great shocks in the history of the Rugby World Cup, beating Ireland 19-12 in Shizuoka this morning.

The hosts had trailed to first half tries by Garry Ringrose and Rob Kearney as the game looked to be following a predictable script.

Japan tore that up in the second half.

Three Yu Tamura penalties in that opening period kept the Brave Blossoms in touch, but the roof nearly game off the Shizuoka Stadium when substitute Kenki Fukuoka raced for the line just before the hour mark. 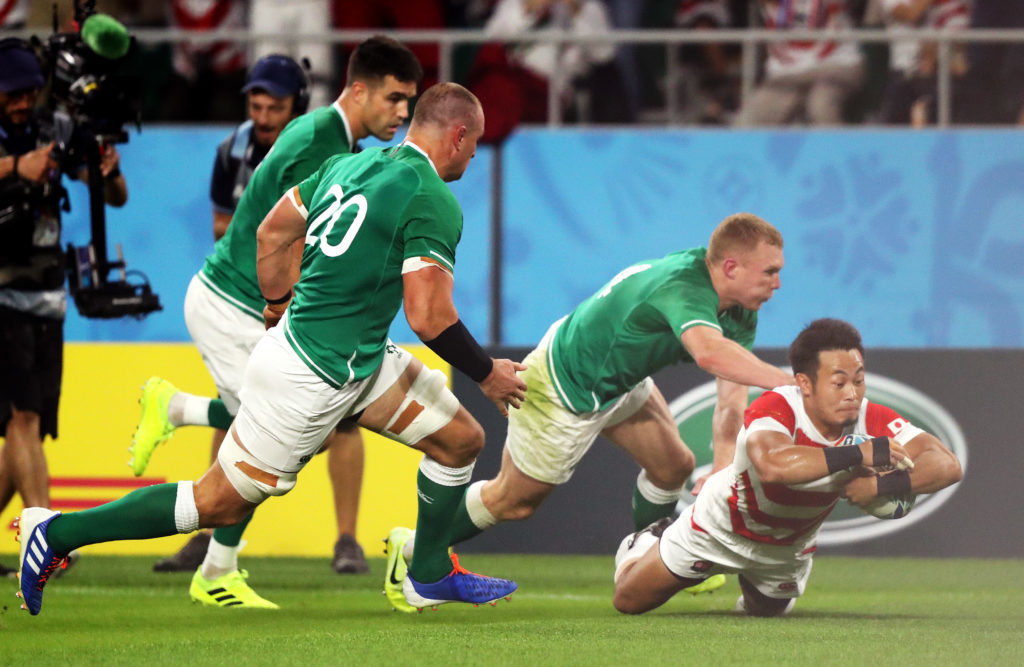 Kenki Fukuoka of Japan dives to score his side's first try during the Rugby World Cup 2019 Group A game between Japan and Ireland at Shizuoka Stadium Ecopa on September 28, 2019 in Fukuroi, Shizuoka, Japan. (Photo by Stu Forster/Getty Images)

The lead was just reward for their fleet of foot and speed of thought in dangerous positions.

Tamura's penalty with 18 minutes to go gave them breathing space and ensured they have now secured a major scalp for the second World Cup in a row following their dramatic win against South Africa in 2015.

For Ireland, ranked second in the world going into this encounter, they must regroup and get set for Russia in Kobe on Thursday.

They can still potentially finish as group winners if the warnings from this result are heeded.

“We played well in the first quarter. We got to a 12-3 lead and we stopped playing to a degree,” said head coach  Joe Schmidt afterwards.

“Congratulations to Japan, what a furious intense effort it was.

“We knew that was potentially coming. We’re incredibly disappointed that we didn’t manage to control the end of the game.

“But they are a tremendous side, they did really well and congratulations to them.”

"We knew how tough it was going to be..."@IrishRugby captain Rory Best praises Japan after their incredible win over Ireland at #RWC2019#JPNvIRE pic.twitter.com/Tcyj7YL191