PAUL GASCOIGNE has been filmed singing ‘F**k The Pope and the IRA’ in a Benidorm bar.

The former footballer was seen mouthing the sectarian chant along with a number of Rangers fans around him in The Ibrox Bar in the popular Spanish resort.

The video was published on Facebook by the Rangers-fan boozer and as a group of revellers sang Tina Turner’s Simply The Best, with added sectarian lyrics, Gascoigne can be seen mouthing along with the words.

Gazza was filmed wearing a blue, floral shirt, shaking hands with people and sipping from, what appears to be, a bottle of water. 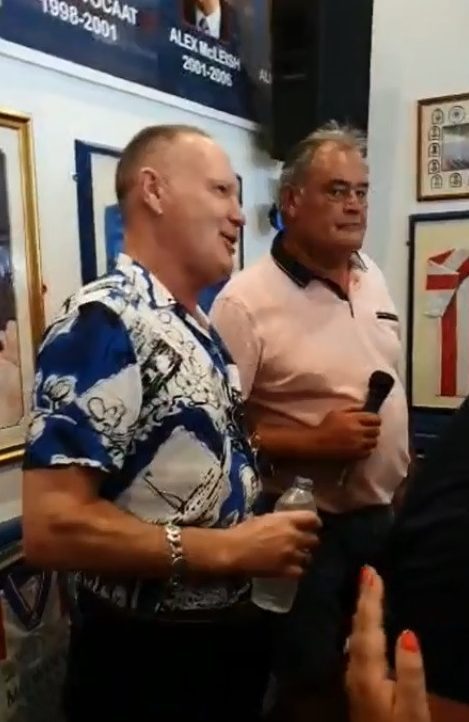 Paul Gascoigne at The Ibrox bar in Benidorm

He’s no stranger to controversy and the Newcastle-man has had previous run-ins with the IRA too.

In 1998, Gascoigne caused outrage by celebrating a goal against Celtic by pretending to play a flute - symbolic of the flute playing during Orange Order marches - during an Old Firm match at Celtic Park.

He received death threats from the IRA and was fined £20,000 by Rangers.

Paul Gascoigne is in Benidorm this week ... He had a meet & greet yesterday in the very busy Ibrox Bar in Calle Lepanto ...

Gascoigne apologised for his behaviour insisting that he didn’t fully understand the context and controversy surrounding the subject, and that he was just trying to get one back at the Celtic fans who had been hurling abuse at him during the game.

The Gers’ have a long-standing Protestant heritage, while Celtic are firmly a Catholic club. The combination of this, and the fact that the two are city-neighbours, makes the Old Firm Derby one of the most highly charged derbies in world football.

Never too far away from controversy, Gascoigne’s life post-football has been something of a tragedy having very public struggles with alcohol, drugs and his mental health over the past two decades.