Easter Sunday 2020: Michael D. Higgins led a special commemoration, marking the 104th anniversary of the 1916 Easter Rising. President Higgins lays a wreath at a group of 16 birch trees planted by himself and Sabina in honour of the revolutionaries executed after the 1916 Rising as part of the Easter Sunday commemorations in the gardens of Aras An Uachtarain. Pic Maxwell's

PRESIDENT MICHAEL Higgins has led a special commemoration marking the 104th anniversary of the 1916 Easter Rising.

The ceremony took place this Sunday, April 12, at Áras an Uachtaráin and the GPO, the rebels’ headquarters during the 1916 Rising.

It began with President Higgins ringing the Peace Bell at Áras an Uachtaráin, followed by a prayer and a reading of the Proclamation.

President Higgins then laid a wreath at a group of 16 birch trees that were planted by himself and his wife Sabina in honour of the revolutionaries executed after the 1916 Rising.

The laying of the wreath was followed by a minute’s silence, commemorating those who died in the Easter Rising as well as the victims of the COVID19 pandemic.

As part of the service Head Chaplain to the Forces Fr Seamus Madigan read a prayer of remembrance for those who have died as a result of the Covid-19 outbreak.

"As we commemorate the sacrifice of those who died during 1916 and gather in their memory, we pray for our country, our people and the challenges of these times.

"Remembering especially all those who have died during this most difficult time."

He also called for “healing of those touched by Covid-19, strength for all who carry the burden of this illness and courage for those who care for our fragile world”. 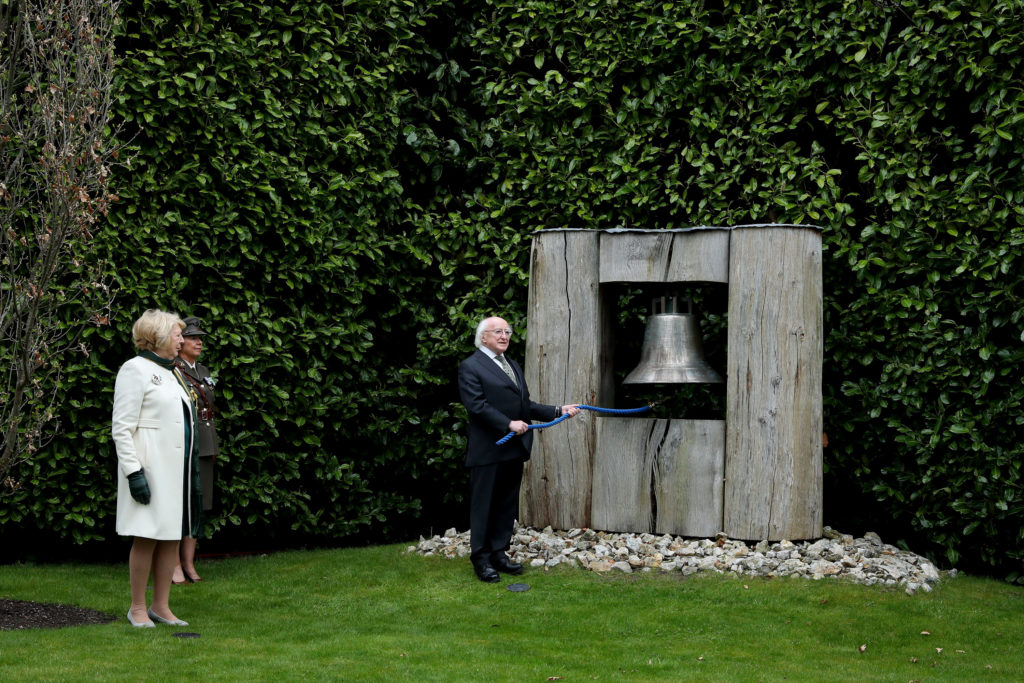 President Higgins previously called on the public to take the spirit of 1916 into their dealings with coronavirus.

“Easter, for us Irish, is a time of remembrance, reflection, hope for the future and, for so many, a coming together with those we hold dear," he said.

“This Easter will be unlike any we can remember. This weekend, we must do things differently.

“We must show our love for each other, our solidarity with the most vulnerable among us and our support for the thousands of women and men who have been working so hard to provide us with essential services and to keep us safe by staying at home, keeping our distance and supporting each other in ways that do not put anyone at risk.

“I believe that this is a most fitting tribute to all those who have given so much to Ireland and to the Irish people.

“This weekend we remember, with appreciation, those who laid the foundations of our republic and all those who are giving witness to the generous ideals of a true republic in their words and deeds during these most challenging times.”