PRINCE Harry commended the “incredible life” of an Irish hero of World War II as he named a new RAF medical facility in his honour.

The British royal opened the Aidan MacCarthy Medical Treatment Facility on Thursday as a tribute to the eponymous Irishman – who survived Dunkirk, enslavement and the atomic bomb.

Around 20 family members of the late Dr MacCarthy gathered at RAF Honington in Suffolk to watch the prince unveil a plaque to the memory of the West Cork man.

The new facility in Dr MacCarthy’s name is located at the same RAF airfield where, in May 1941, the Irishman entered a burning plane to single-handedly drag the crew of a crashed RAF bomber to safety.

For that, he was awarded the George Medal for bravery by Prince Harry’s great-grandfather George VI.

Bob Jackson, who wrote the book A Doctor’s Sword on MacCarthy’s extraordinary life, said the grand opening was an “unbelievable” experience.

“I was introduced to Prince Harry and he was very interested in learning more about the man,” Mr Jackson told The Irish Post.

“So I gave him a copy of the book and he asked me to sign it. He said it sounded like Dr MacCarthy had an incredible life.

“His great grandfather George VI awarded Aidan the George’s Cross so he was very interested in that connection as well.

“It was an unbelievable experience, it really was.”

Dr MacCarthy’s daughters, Nicola and Adrienne, were also in attendance to see their late father honoured. 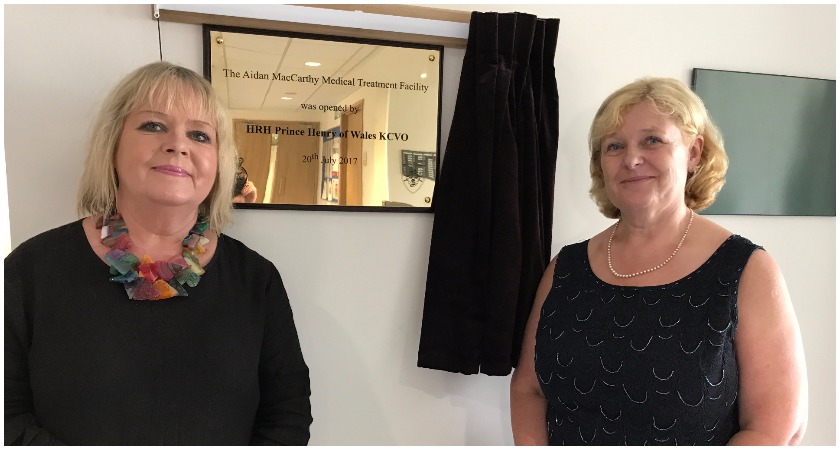 Adrienne said Prince Harry was “staggered” at Dr MacCarthy’s one-of-a-kind life story. “It was a real honour for us,” she said.

She added that a number of people based at the 1,000-strong RAF base told her they had read about her father’s heroics.

“He was always a bit of a hero there anyway,” she said.

Dr MacCarthy was one of around 300,000 servicemen evacuated from the beaches of Dunkirk in 1940. A new film on the event – starring Irish actors Cillian Murphy, Kenneth Brannagh and Barry Keoghan – is out in cinemas from today.

Bob Jackson, who followed up his book with a highly-acclaimed documentary in 2014 (also called A Doctor’s Sword), said Dr McCarthy’s own story is extraordinary enough to merit its own big screen treatment.

After surviving Dunkirk, Dr MacCarthy was transferred to Java, whereafter he was captured by the Japanese and forced to work as a slave for the Mitsubishi Corporation in Nagasaki. 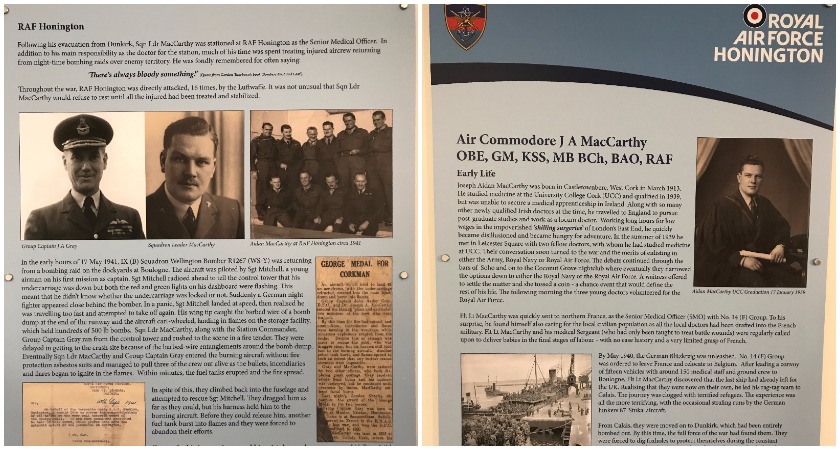 He was on board a Japanese ship when it was torpedoed by an American submarine and was one of just 35 survivors from the 1,000-plus prisoners on board.

The Castletownbere native was just a mile away from the epicentre of the atomic bomb explosion when it was dropped on Nagasaki in 1945, and helped with the relief effort in the devastated city.

He saved his camp commandant from being executed by fellow POWs intent on revenge at the end of the war, and was gifted the commandant’s ancestral samurai sword as a gesture of thanks.

Dr MacCarthy left for the Second World War weighing 14 stone but returned to Ireland after its conclusion at just half that weight.

Prince Harry also viewed a special exhibition case set up at the RAF base, which displays the samurai sword gifted to MacCarthy.

Also on display were the doctor’s medals and the bowl he used to make protein-rich ‘maggoty soup’ for fellow prisoners who fell ill.