PUREGYM has been widely criticised after one of its facilities posted a bizarre slavery-based workout regime to their Facebook page.

The company has apologised "unreservedly" after their Luton and Dunstable gym promoted a '12 Years Of Slave' workout plan designed to celebrate Black History Month.

"Slavery was hard and so is this," read the post.

PureGym later described the post as "wholly unacceptable" and was "not approved or endorsed by the company".

It has since been deleted. 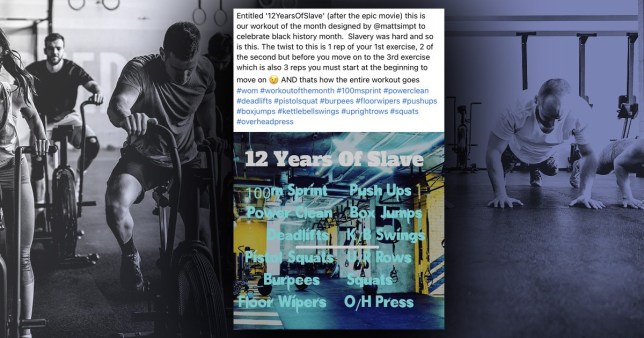 The workout, named after the Oscar-winning movie '12 Years A Slave', included 12 different exercises such as burpees, push ups and box jumps.

The post goes on to say: "The twist to this is 1 rep of your 1st exercise, 2 of the second but before you move on to the 3rd exercise, which is also 3 reps, you must start at the beginning to move on. AND that's how the entire workout goes."

"Please tell me you are not seriously equating going to the gym with the horrors of the slave trade?!" Wrote one social media user.

"Pure Gym must have an offensively tone deaf marketing team thinking it is acceptable to compare a workout to slavery ffs," added another.

After apologising for the incident, PureGym - the UK's largest gym chain - insisted that each of their 271 gyms has its own social media channels which are run locally, and stressed that they would be launching an investigation into how and why the post was made.