Seven things you need to know about Bloody Sunday

A large group of protestors were fired upon by the troops, with 13 people losing their lives on the day.

A fourteenth died months later from an illness related to injuries he suffered on what became known as 'Bloody Sunday'.

The victims were aged between 17 and 41 – with five of the dead teenagers.

No one has ever been brought to justice for the deaths and the investigation into the events on that day continue today.

On January 30, the family, friends and neighbours of the 14 victims come together for their annual commemoration in the Bogside area of Derry City, where the shootings occurred.

The British Army fired shots at a civilian march, where 10,000 people were peacefully marching through Derry City. They were protesting the fact that the British forces had introduced internment without trial

The march happened at a tense time in Derry – just a week previously, the British Army beat protesters off the strand near the Magilligan peninsula in Derry during a separate civil rights protest

The march began at 3pm and the first shots were fired by the British Army officers at 3.55. It began as a 5,000-strong march and by the time the shots were fired, the crowd had doubled in size 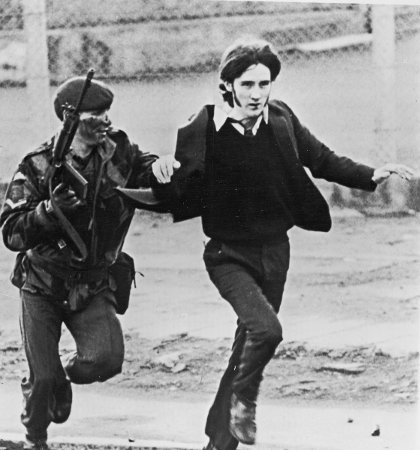 A British soldier with a captured youth on Bloody Sunday. Picture: Getty Images

The British soldiers attended a tribunal after the shootings – where eyewitnesses claimed the shootings were unprovoked. The British Government appointed Widgery Tribunal found the soldiers were “bordering on the reckless” – but upheld their claims that they fired shots at gunmen and bomb throwers

It was not until 2010, after the Saville Inquiry closed, that it was officially acknowledged that the British troops had fired the first shot, fired on unarmed civilians and shot and killed one man (Jim Wray) after wounding him. Prime Minister David Cameron issued an apology from the British Government after the publication of the report to the victims and their families

The first ever arrest in relation to the Bloody Sunday deaths was made in November 2015, when a former British soldier was arrested in Co. Antrim. He was released on bail shortly after – and a separate group of soldiers successfully lodged a legal bid in London against their extradition to the North of Ireland for questioning the following month