"I was shaking": Co Meath couple who were subject to torrent of racial abuse after appearing in Lidl advert speak out

(Fiona, Jon and their son on the billboard which was targeted by O'Doherty)

An interracial couple from County Meath who appeared in an advert for Lidl with their young son have been subjected to a torrent of racial abuse-- and now the woman who triggered  the abuse is threatening to sue them.

Fiona Ryan (33) and her fiance Jonathan Mathis (32) appeared with their 22-month-old son in a billboard advert for the German supermarket chain earlier this month, with the caption demonstrating how 'The Ryans' had saved money by switching to Lidl. 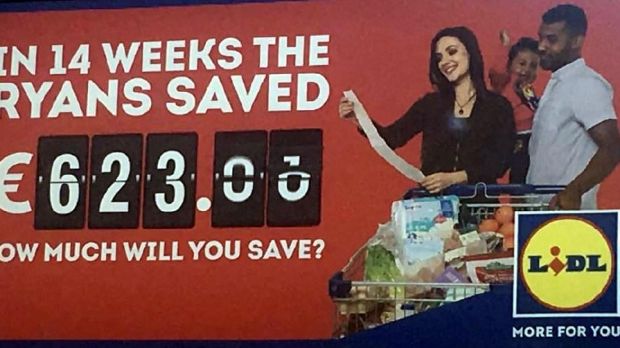 (Fiona, Jon and their son on the billboard which was targeted by O'Doherty)

The billboard was seen by former journalist and far-right conspiracy theorist Gemma O'Doherty, who took aim at the couple and the Lidl chain, accusing them of promoting the white-nationalist theory of 'The Great Replacement'.

In a tweet which has since been removed by Twitter for violating its community guidelines, O'Doherty incited the anger of her 32,000 followers by posting the photo with the following caption:

"German dump @lidl_ireland gaslighting the Irish people with their multicultural version of 'The Ryans'. Kidding no-one! Resist the Great Replacement wherever you can by giving this kip a wide berth. #ShopIrish #BuyIrish"

Lidl's verified account responded quickly, announcing they had blocked O'Doherty from viewing their tweets, had reported her to Twitter and would be contacting the Ryan family to provide support.

Now, speaking to The Irish Times, Ms Ryan and Mr Mathis have spoken of the effects that the barrage of abuse against their family has had on them, with Ms Ryan saying "I was shaking. I felt sick to my stomach. It was the first time I had come across racism personally."

However Mr Mathis, who is from Brazil and grew up in Liverpool before meeting Ms Ryan in London, has suffered from racist abuse his entire life and told the newspaper that his earliest memory is being called "a n*****" when he was just a few years old.

He said the abuse, while not shocking, caused him to feel "anger and hurt" but he was "not as fearful for my safety the way Fi was".

The couple met in London before moving back to Ms Ryan's hometown after their son was born in order to save money, and had taken part in the Lidl campaign to continue to boost their savings.

The family reported the abuse to Gardaí but were told it was a civil matter and that there was nothing the police could do to help them-- and for this the couple say they have to thank O'Doherty "for highlighting there is no real hate-crime legislation".

The couple experienced anxiety as a result of the abuse, with Ms Ryan saying "I was never aware of people who could look at us negatively," and cancelled a planned trip to Dublin's Culture Night in case they were recognised by any of O'Doherty's followers.

The Irish Times contacted O'Doherty on several platforms ahead of publishing the article but received no reply.

Ms Ryan, however, received an email from O'Doherty threatening her with legal action.

In the email, O'Doherty said:

“The Irish Times have been in touch with me regarding outrageous and false allegations you have made about me to them. Please be assured it is my intention to take you to court as a result and if those false claims you make about me are put into the public domain by The Irish Times, you are exposing yourself to grave financial risk,”

O'Doherty's original tweet was public, and was seen by hundreds or even thousands of people before it was removed by Twitter.