THE STARK image of a four-year-old homeless girl eating dinner from a plastic tray by a roadside has sparked fury in the Dáil.

The heart-breaking photograph was taken outside a Dublin soup kitchen earlier this week amid a backdrop of rising homelessness caused by surging rents in the capital and beyond.

Sinn Fein leader Mary Lou McDonald was among those in opposition to draw attention to the “shameful” image as a damning indictment of the government’s failure to address the issue.

Speaking in the Dáil, she called for rents to be cut and any increases banned.

McDonald said: “The heart-wrenching image that we have seen again of a four-year-old child sitting on a crate here in the capital city, eating her dinner on the side of the street.

“It’s not the first time that we’ve seen a child eating their dinner in similar circumstances, and this, I suppose, is the sharpest edge of bad policy and of bad government which has seen house prices go up and up.

“Indeed, the CSO [Central Statistics Office] tell us that house prices in Dublin have increased by a staggering 96% in the last nine years.” 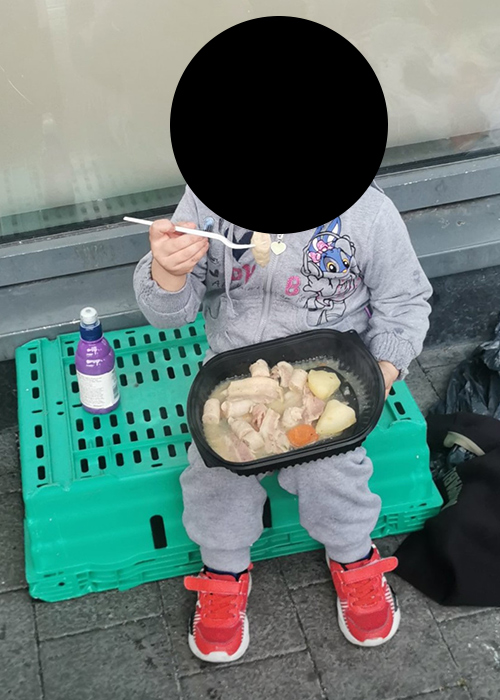 Taking aim at the Government’s failure to address rising rents, McDonald used Leaders’ Questions to call for Taoiseach Micheál Martin to “ensure that rents are cut and that increases in rents are banned’ along with a ban on evictions.”

Responding to the criticism, Martin defended the government’s record on homelessness.

He said: ‘That image, that photo, is a very upsetting one, but progress has been made in relation to homelessness in the last ten months. Family homelessness has declined by about 42%.”

Martin, however, did not address any of the issues around rent reforms.

Today, @MaryLouMcDonald put it to the Taoiseach that we should all work together to cut rents, and introduce a ban on rent increases. Micheál Martin had no response.

On the basis of his non response and evasion, I can only conclude that the Taoiseach does not believe that rents are too high, that rents need to be cut and frozen, that generation rent needs a break. Shameful stuff from the chaos government.

Reflecting on the exchange and ongoing situation, McDonald later tweeted: “On the basis of his non-response and evasion, I can only conclude that the Taoiseach does not believe that rents are too high, that rents need to be cut and frozen, that generation rent needs a break.

“Shameful stuff from the chaos government.’