SIX Irish beaches have failed to meet the minimum required standard for bathing after bacteria and septic tank discharges were found in the water.

Bathing areas in Ireland are currently classified in one of four categories - Excellent, Good, Sufficient or Poor. The mandatory requirement is for Sufficient quality.

The bathing season in Ireland runs from June 1 until September 15.

The six beaches, across counties Dublin and Galway, were marked poor by the Environmental Protection Agency in Ireland in their 2016 bathing water report.

Merrion Strand, Loughshinny Beach and Portrane Beach in Dublin had issues with drainage from local areas, as well as sewage and septic tank discharges.

The EPA also found traces of E.coli on the poor-rated beaches. 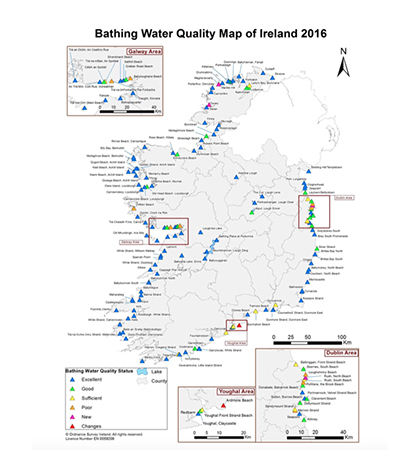 A map of the statuses of beaches and strands around Ireland. (Picture: EPA)

If bathing water has been classified as Poor it means that there is a risk of periodic microbiological pollution which could potentially cause illness such as skin rashes or stomach upset.

Under the Bathing Water Regulations, local authorities are required to put in place notifications for the entire bathing season advising the public against bathing.

While six beaches failed to make the grade, three quarters of Irish bathing waters are of Excellent quality for the third year in a row.

At the launch of the Bathing Water report, Peter Webster, EPA Senior Scientific Officer said: “Ireland has no shortage of beaches around our coast with excellent water quality."

Here's the list of beaches that failed to make the grade...

The top 10 Irish beaches revealed, as voted for by TripAdvisor travellers