A SCOTTISH National Party MSP has said he is “extremely sorry” after he posted a tweet comparing three IRA killers to “freedom fighters”.

John Mason made the remarks on Twitter after being asked to support a justice campaign for the three soldiers, who were killed in Northern Ireland in 1971.

Brothers John McCaig (17) and Joseph McCaig (18), along with Dougald McCaughey (23) were lured away from a Belfast bar on the pretext of meeting women.

They were instead taken to North Belfast where they were shot dead.

Nobody ever stood trial for the killings despite mass protests and a resulting political crisis, which led to the resignation of Northern Ireland Prime Minister James Chichester-Clark.

Responding to a tweet calling for him to support the justice campaign for the three soldiers, Mr Mason replied that he was “not taking sides between Irish and British”.

He added: “You say Irish murderers, others say Irish freedom fighters. I support Scottish soldiers if they do good but not if they do bad.” 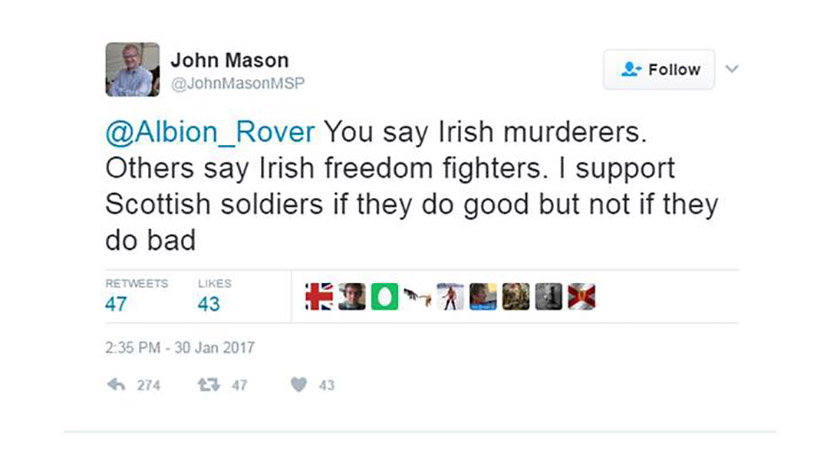 A relative of one of the soldiers told the BBC’s Good Morning Ulster programme this week that the tweet was an “insult” to his family.

Mr Mason has issued a public apology in which he says he is “extremely sorry” for any offence caused by his comments.

He said: "I deeply regret the offence and upset that has been caused to the relatives who lost loved ones and am extremely sorry that this has happened.

"I condemn and deplore all acts of terrorism."

A memorial for the three soldiers was placed on the site of their death in 2009 and has been targeted by vandals, most recently in 2015.

Police labelled the act of vandalism a hate crime.

Leo Varadkar explains how 'vaccine certificates' could work in Ireland