YESTERDAY’S momentous unveiling of an Easter Rising monument at Glasnevin Cemetery proved embarrassing when a spelling mistake was spotted etched into the mighty stone memorial.

As the remembrance wall, bearing all the names of the soldiers and civilians – both British and Irish – who died in the 1916 Easter Rising, was revealed yesterday morning Irish language speakers quickly flagged up an unfortunate typo in the title. 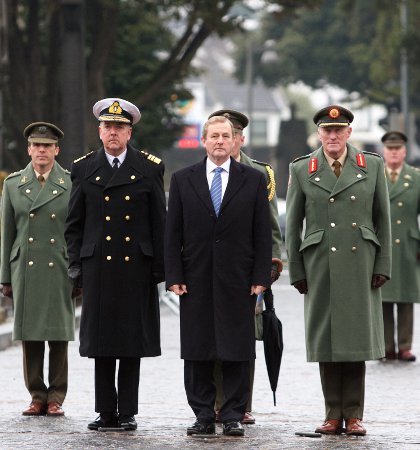 Carved into the vast wall, made of black granite stone, underneath the heading ‘Easter Rising 1916’, is the Irish version ‘Eírí Amach Na Cásca 1916”.

Keen-eyed viewers soon realised that the first word ‘Eírí - meaning ‘rising’ - features a fada over the first I and not the E, when it should be spelt “Éirí”.

The mistake was broadcasted live across Ireland as RTÉ covered the historic event, which saw acting Taoiseach Enda Kenny lay a wreath during the ceremony.

A range of leaders from multiple faiths were also in attendance and were among those who spoke at the service.

The wall - which has courted controversy as it includes the names of 119 British soldiers who were casualties of the 1916 rebellion – is intended to reflect ‘modern Ireland’, Glasnevin Trust Chairman John Green confirmed.

"Behind each and every one of these lost lives is a story of heartbreak, no matter what side the person served on or indeed for those innocently caught up in the conflict," he said.

Regarding the typo, the Glasnevin Trust have acknowledged the mistake and claim “it will be corrected immediately”.