A SCHOOLBOY who was stabbed and left for dead on a busy street has appealed to find the two Irish Good Samaritans who saved his life.

Jahmal Swaby said his life “flashed before his eyes” when he was attacked and knifed in the chest.

The 15-year-old, from Stonebridge in north west London, was set upon outside Finsbury Park train station a week ago by a gang who demanded he hand over his designer scarf.

Despite being injured and distressed, he was ignored by passers-by and drivers deliberately drove by him as he staggered into the road in a desperate attempt to seek help.

It was only then that two men, described by Jahmal as Irish, spotted him and stopped to help.

Telling him not to panic, they put pressure on his wound to reduce the blood loss before calling an ambulance and staying with him until he was taken to hospital.

“I want to meet those guys and thank them in person because basically they saved my life,” Jahmal told The Irish Post. “I do not think I would be here today if it were not for them.”

Recounting the incident, which happened after he left a party in the early hours of the morning, Mr Swaby says he was stabbed after he and his friends were approached by a group of young men who told him to hand over his Louis Vuitton scarf, which he had borrowed from his brother.

“I didn’t feel pain when it happened but I just remember my life flashing before my eyes,” he said. 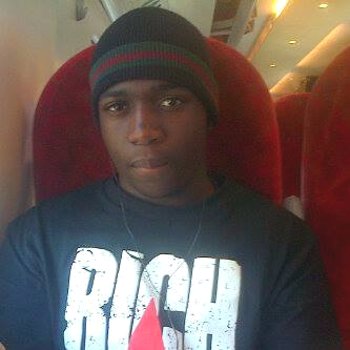 “At that point I wasn’t in control of myself, so I stumbled into the road and cars were swerving to avoid me. Somehow I got to the other side of the road and then these Irish guys helped me, put me on the ground, put pressure on my wound and that is the last thing I remember.”

He added that the experience of being ignored by people as he faced death left him feeling “completely worthless”.

“I am a human being and I can't believe someone could just ignore another human being like that,” he added. “I had no hope when people were ignoring me, but then those Irish guys came along and I had a bit of hope.”

Jahmal, who is a student at a school in Wembley, was rushed to Royal London Hospital in Whitechapel, east London, where he stayed for two days to receive treatment for a four-inch long and three inches deep stab wound.

During the attack his 15-year-old friend suffered minor injuries while another had his phone stolen.

“It is rare to find normal citizens who are willing to help people in need these days,” added Mr Williams, who became Jahmal's legal guardian after their mother died two years ago.

“There are people who openly condemn knife crime and show their support to victims but when push comes to shove, these same people are the ones who walked past my brother, holding their heads down.”

Jahmal described the two Good Samaritans as both being white, middle aged, around 6ft tall and of normal build. He said both had Irish accents and one was wearing a black polo top.

Two boys age 14 and 17 have been arrested in connection with the attack and were bailed to return to a police station next month.

Are you one of the good Samaritans who helped save Jahmal's life or do you know who they are? If so, call The Irish Post on 020 8900 4231 or email [email protected]://http://irishpost.co.uk

Leo Varadkar explains how 'vaccine certificates' could work in Ireland