'Stick your neck out!' – Ex-Arsenal Chairman David Dein MBE inspires at The Irish Post Breakfast in The City 2019

"It was a pleasure to welcome Mr David Dein MBE to our Breakfast in The City event this morning as keynote speaker, ahead of what is guaranteed to be a busy St Patrick's month," says publisher of The Irish Post Mr Elgin Loane.

The former Arsenal FC Vice-Chairman shared several inspiring stories from his incredible career in business, spanning his role in the creation of the Premier League to his recent work with the Twinning Project helping to rehabilitate prisoners.

The eminent businessman also shared the motto he uses every day of his life: "Stick your neck out" - which he credits as the main philosophy behind his success.

He added: "I was always an Arsenal fan and in 1982 I stuck my neck out and sent a letterto the board asking to buy a share of the club.

"After that I sent a blank cheque to show I was serious. In 1983 I was appointed Vice-Chairman." 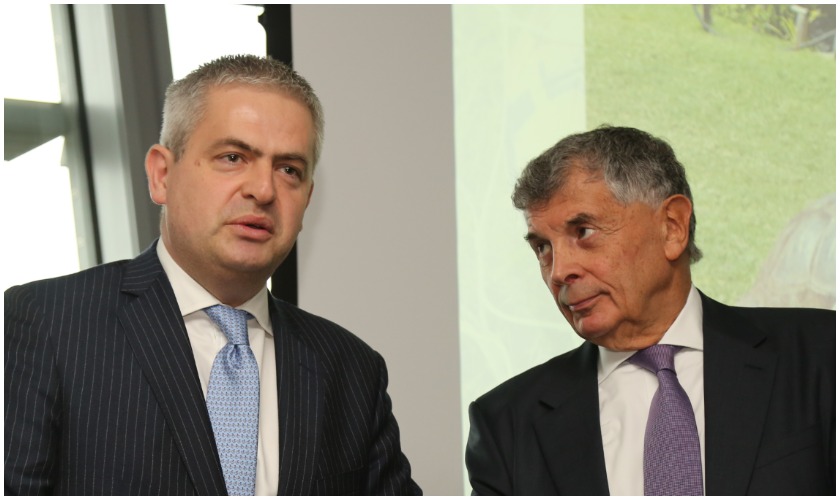 The Irish Post publisher Elgin Loane [left] speaking alongside David Dein MBE at Breakfast in The City 2019 (Image: Brendan Vaughan)
Mr Dein was famously responsible for bringing legendary manager Arsène Wenger to the north London giants in 1996 during his tenure at the club, which lasted from 1983 to 2007.

He has also previously served as Vice-Chairman of the Football Association (FA) and sat on various committees within FIFA and UEFA including UEFA's Club Competition Committee and Executive Committee.

In December 2018, it was announced that Mr Dein had been awarded an MBE (Most Excellent Order of the British Empire) in the Queen's New Year’s honours list for his services to football and his current voluntary role as a motivational speaker in school and prisons.

The annual breakfast was once again held at the headquarters of multinational law firm DWF LLP in the City of London’s iconic Walkie-Talkie Building.

The Irish Post Breakfast in The City is sponsored by DRS Bond Management – the UK and Ireland's premier Surety broking and advisory firm for the Construction sector.

Just one-third of Irish people plan to return to the office when pandemic ends, study shows