'Stop and search, wrongful arrests – I grew up in that culture' London Mayor Sadiq Khan reveals experience of discrimination as he pledges support for the Irish

MAYOR OF LONDON Sadiq Khan has pledged to support the Irish community amidst challenging times in post Brexit Britain.

Speaking exclusively to The Irish Post before delivering the keynote speech at this year’s Irish Post Awards, the newly-elected Labour Mayor said prosperity and inclusion were among his priorities.

While praising the ‘massive contribution’ made by Irish people to London, he also acknowledged the challenges that lie ahead following Britain’s decision to exit the EU.

“There are challenges, particularly post Brexit,” he said. “There was an increase in hate crime and we’ve got to make sure that as a consequence of us voting to leave the European Union – and London was the one region in England that voted to remain – that we don’t allow that to lead to fewer jobs, less growth and less prosperity.”

“Growing up in south London as I did, born and raised in London, I’ve had Irish friends all my life.

"When I think of the Irish community, the link words I think of is success, fun, entertainment - sports people from Roy Keane to Liam Brady when I was growing up, entertainers from Shane Richie to Terry Wogan. Politicians and friends like Chris Ruane and Conor McGinn.”

He added: “It’s really important to celebrate the contribution made, to what I think is the greatest city in the world, by the Irish community.” 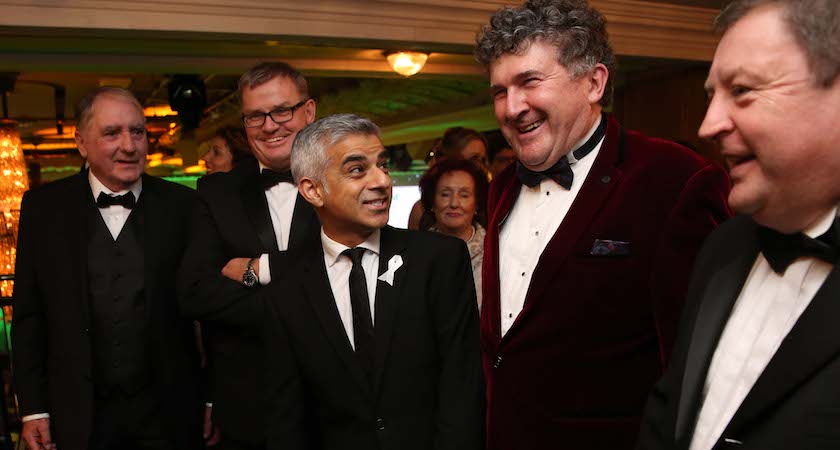 As a former human rights lawyer the Mayor, whose family came to London from Pakistan, spoke of how the discrimination and miscarriages of justice of the past have no place in modern Britain.

“We know all about the Troubles in the 70s and 80s,” he said. “Actually the reality is, if you see some of the discrimination the Irish community suffered in previous decades...

"When my dad first came to London in the 60s, I remember him telling me about the signs ‘no blacks, no Irish, no dogs’ in pubs, B&Bs, guest houses.

"[This was the] discrimination on an everyday basis that hard-working Londoners of Irish descent faced."

He added: “Stop and search, wrongful arrests – I grew up in that sort of culture. I believe in solidarity. I believe in being my brother’s keeper - that’s been the great thing about the Irish people’s contribution to London.”

The Mayor also committed to supporting St Patrick’s Day festivities in London, which sees as many as 100,000 people join in an annual parade and festival to mark March 17.

“We’re going to make it bigger and better in this coming year,” he said.

Praising The Irish Post for being a connecting force between Irish people and Ireland, he added: “The reason why The Irish Post is so important is because people still have an emotional attachment to their country of origin, or where mum, dad, grandparents, cousins still live. People often go back to Ireland, they may have a home in Ireland.

"They know what’s happening, they’ll have an interest in Irish politics, but also Irish sports and Irish community.”

On a lighter note, he revealed how he had switched allegiance to the Republic of Ireland football team after England's Euros knockout against Iceland in the summer.

"Many Londoners this year were relieved they were supporting Ireland rather than England," he joked.

He also spoke of enjoying visits to the Irish capital over the years.

“My wife and I love Dublin, we’ve had weekends there. It’s a great city – it’s such a cool city, the buzz, the vibe, the atmosphere, great shopping,” he said.

“I don’t drink but…everyone suggests that unless you drink Guinness you can’t appreciate Dublin, not true,” he joked.