Surge of Irish House interest from Ex-Pats, anxious to Return to Ireland after the Pandemic

The race for remote working space and the urban flight from cities is driving a huge rise in property prices outside our major cities, the Irish Independent REA Average House Price Survey has found.

REA reports that Average house prices have risen by €3,500 per month since the end of June.

Selling prices in commuter areas and small towns increased by over 4.6% over the past three months – double the growth experienced in the major cities.

And massive demand for properties outside the capital has seen unexpected quarterly rises in towns such as Nenagh where scarcity of supply and bidding wars meant that three-bed semis have sold at 23% above their recent value – an increase of €45,000. 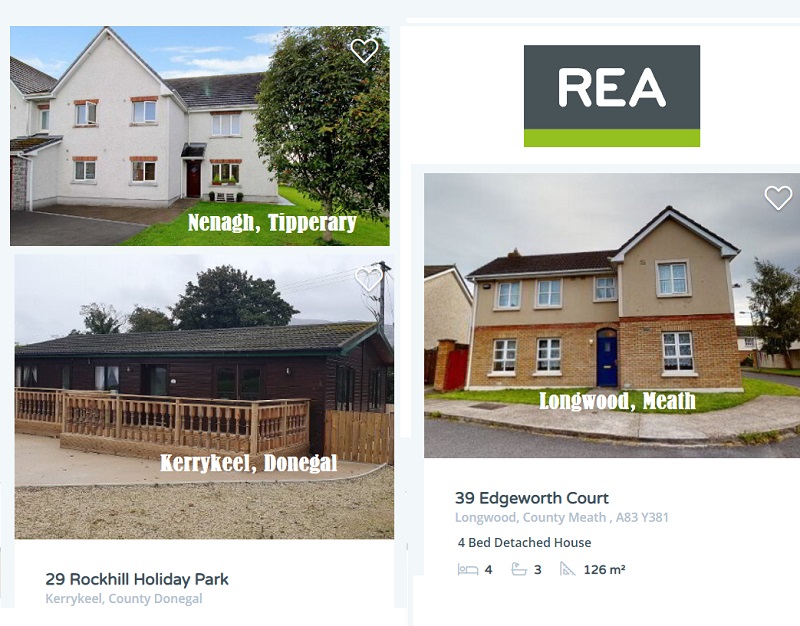 The price of a three-bedroomed semi-detached house across the country rose by €10,000 over the past three months to €264,056, representing an annual increase of 12%.

The biggest rises in Q3 came in commuter counties (4.6%) and the country’s large towns (4.9%) as buyers continue to move out further from the capital in anticipation of long-term remote and hybrid working situations.

Surge of interest from ex-pats, anxious to return to Ireland after the pandemic

They are being joined by a surge of interest from ex-pats, anxious to return to Ireland after the pandemic, with more set to return when family homes become available.

DOUBLE for Rural and Commuter Areas

The rural and commuter area increases are double those being experienced in Ireland’s major cities, with Dublin increasing by 2.3% and Cork Limerick and Galway by an average of 2.4%.

However, in Clontarf, annual prices have risen by 6% in the past three months to €715,000 – a jump of 19% annually according to agents REA Grimes as interest rises in higher value properties in good locations.

Only Four Weeks to Sell

“The survey’s average of four weeks to sell should be even lower because, while bidding is fast and furious, vendors are not rushing to accept offers,” said REA spokesperson Barry McDonald.

“Buyers are bidding to their maximum levels very quickly in the rush to secure a home – even on houses that may be in poor condition, despite increased construction and renovation costs.

“With an exceptional shortage of stock, demand is being fuelled by an increase in mortgage-approved buyers on the market.

Exceptional shortage of Houses for Sale

“The rural flight, which began during lockdown, shows no signs of letting up, even in the face of a return to office working.

“In Stoneybatter, REA Fitzgerald Chambers report that all sales in the quarter were for vendors who are moving out of Dublin to locations around the country.

“In Nenagh REA Eoin Dillon has reported that three-bed semis that previously fetched €190,000 have sold for €235,000, such is the scarcity of supply.

“The effect is being felt nationwide with counties such as Tipperary (9.2%), Donegal (8.4%) and Kilkenny (7.3%) all experiencing sharp rises in Q3 as buyers seek value locations.

“Our agent in Roscommon REA Seamus Carthy reported that 75% of sales in the last quarter were family homes for people who are returning to the county from cities.

“In my own suburban area of Lucan, we are seeing a combination of people selling to move further afield and buyers moving out from the from the city centre because they feel they don’t need to be in walking distance of the office any more.”

“There is a surge of interest from buyers in Dublin and ex-pats wanting to come home,” said Michael Boyd of REA Boyd’s, Kilkenny City, where average prices have risen by €17,000 in Q3 to €275,000 and properties are now moving in two weeks.

Cork, Limerick, Galway and Waterford cities shared a combined increase of 2.4% in the past 12 weeks with the average three bed semi now costing €281,750 – an increase of €6,000 on the June figure.

Waterford saw the highest rise at 4% with prices rising by €10,000 to €250,000, with agents REA O’Shea O’Toole reporting an increase in young purchasers who are prepared to do some commuting from a city full of amenities while benefiting from lower house prices and proximity to the coast.