TAOISEACH Leo Varadkar was cheered from the rafters as he marched alongside his partner Matt Barrett at Montreal Pride on Sunday.

The pair were joined by Canadian Prime Minister Justin Trudeau at the event, which coincides with the first of three days in the country for Mr Varadkar.

Mr Trudeau said the Taoiseach was the first foreign head of government to take part in a pride event in Canada.

Speaking to the crowd, Mr Varadkar said progressive values are “under threat” in some parts of the world, and that Ireland and Canada have a responsibility to promote them.

“We need to stand up to homophobic bullying in workplaces and schools, we need to make more advances in the area of sexual health; that is a key priority for me at home and internationally,” he said.

“Countries that are progressive, open and diverse, like Canada and Ireland, have a responsibility to other people in other parts of the world where equality and equal rights are under threat and the clock is being turned backwards.

“We need to use our voices to stand up to communities who face real threats and real dangers.” 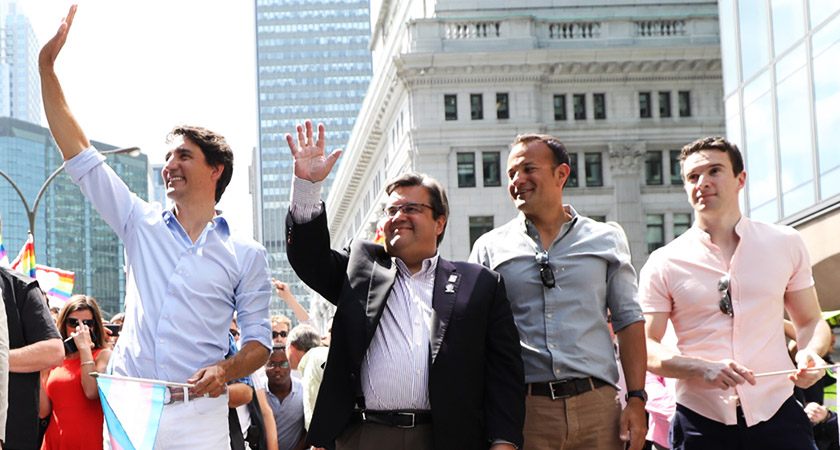 He added: “I think Ireland and Canada have a lot in common. What we have most in common that we are countries that understand that diversity is our strength and our differences make us better.”

The leaders also held talks earlier in the day, where they discussed a range of issues, including Brexit and abortion.

Speaking at a joint news conference after the bilateral talks, Mr Varadkar said he wanted to hold a referendum on the controversial Eighth Amendment in the first half of next year.

Mr Trudeau supported the move and added that reproductive rights are “human rights".

Varadkar used his appearance in North America to reveal that his invitation to US President Donald Trump to visit Ireland still stands.

The Taoiseach said he intends to visit the White House in March 2018 for St Patrick’s Day, as with previous Irish PMs before him.

He added that he welcomes the Brexit position papers published by the British Government last week.

Mr Varadkar is in Toronto on Monday, where he will meet with business and tourism leaders and attend a reception with the city’s Irish community.