Ten years on from 7/7: The story of Irish victim Ciaran Cassidy

When Veronica Cassidy waved goodbye to her son one summer’s morning 10 years ago, she never imagined that it would be for the final time.

The day had begun like any other. The pair set off on their daily commute together from their home in the leafy, suburban Crouch Hill, north London, on Thursday, July 7, 2005.

“I’d left him that morning, he walked down with me, he went for the Tube and I continued walking, he gave me a kiss goodbye,” Mrs Cassidy says.

It’s the kind of tender gesture that she fondly remembers of her son, Ciaran, 22, who had then boarded his usual Piccadilly Line train to Chancery Lane, where he worked as a shop assistant for a printing company.

Tragically, he never arrived at his destination.

Ciaran died in one of the worst terrorist atrocities to hit Britain, after the carriage he was travelling in was ripped apart by one of the bombs that exploded deep underground near Russell Square.

“People say he was in the wrong place at the wrong time but he wasn’t, he always went for the front carriage because he used to say it was less full,” she adds.

“People that we know were talking to him on the platform and he left them to go to the first carriage.”

His family in both Ireland and Britain endured a painful week in the aftermath, anxiously hoping for good news, but reluctantly awaiting confirmation of his death. 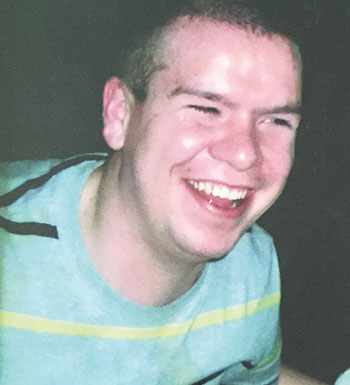 As Mrs Cassidy, 63, recalls the last memory that she has of her son alive, it’s evident that even a decade on, she still wears the scar of losing her son in the most painful of circumstances. With great sadness, she adds: “You don’t move on, you live with it.”

Originally from Enniskillen in the North of Ireland, she had worked in Belfast City Hospital during the Troubles in the 1970s, later marrying Ciaran’s father Sean, 67, who had moved to Britain from rural Ireland.

Together the couple raised Ciaran and his older sister Lisa in a close-knit family.

The Cassidy’s living room is adorned with framed photographs of Ciaran, some on the cabinet shelves, others lining the mantelpiece.

Not only do the pictures keep the memory of their son alive after all these years, but his cheerful demeanour projects a warmth throughout the spacious room.

“He was one very, very friendly boy, everybody says that, always smiling, very happy,” Mrs Cassidy says, flicking through the old photographs of him that she had laid on her lap.

Whilst Ciaran’s mother reminisces with sadness the bright future stolen from her only son, an Arsenal FC fan with a passion for music, it’s his father Sean who expresses a continued resentment and anger towards those responsible for the events that claimed the 52 lives in London 10 years ago.

“I still feel anger. We’ve never received a decent apology from anyone, or even from the bomber’s families,” he says.

“They never seemed to surface and say anything.”

The pain runs deeper in Mr Cassidy’s eyes, because he believes the senseless acts of a few individuals tore apart hundreds of lives for no real purpose.

“I’d like all the 52 to be remembered, they were brutally murdered for absolutely no cause,” he continues.

The Swalinbar, Co. Cavan, native adds that whilst daughter Lisa’s wedding in two week’s time is a time of joy and celebration, it’s also a point of reflection for what the family have lost.

Now retired, Mr Cassidy, who used to work for the Royal Mail, now spends most of his days tending to his nearby allotment.

It’s indicative of the journey the family have travelled, trying to rebuild their lives that were shattered by their terrible loss.

But, today, on the 10th anniversary of the tragedy, the family will once again relive the painful memories as they pay their respects to Ciaran.

Along with families of the 52 who lost their lives and the hundreds who were injured, they will attend a service at St Paul’s Cathedral and a wreath laying ceremony at the memorial for the victims at Hyde Park.

Three bombs went off on underground trains just outside Liverpool Street and Edgware Road stations, and on another travelling near Russell Square on July 7, 2005.

The final explosion came around an hour later on a double decker bus in Tavistock Square, close to King’s Cross.

Whilst the Cassidy family continues to try and move on, terrorist attacks such as that which occurred a fortnight ago in the Tunisian resort city of Sousse, reopen old wounds.

“We want a better life, we want something sorted out in the world today, I mean there’s been another 7/7 in Tunisia, we want to get rid of these things,” he says.

“Something has got to be done with the people that are carrying out these atrocities, 7/7, 9/11, Tunisia, too many more. There’s stuff going on now in the Middle East and in Syria and Iraq, it’s just awful really.

“It’s just people behaving like animals. If the West is strong enough to move against it you can get rid of extremism. Western society can’t take much more of this.”