TESCO is to discontinue its Irish food section in 202 British stores from the end of July, The Irish Post can reveal.

The supermarket giant has already been gradually phasing out products from its Irish foods section, leaving consumers at some branches finding almost empty shelves where their food from home was once located.

Tesco currently stocks 58 Irish products in its stores, including some of the best loved Irish brands.

Barry’s Tea, Tayto crisps, Boland’s biscuits and Irish versions of Cadbury’s chocolate are among the range that features in the chain’s Irish aisles.

Irish sections were rolled out by the supermarket in 2011 and at their peak they featured around 160 products.

Now the supermarket’s Irish products are also said to be disappearing from its online platform tesco.com.

The shock decision by the retail giant to axe its Irish offering comes despite Tesco’s Irish consumers being the biggest basket spenders of all of the supermarket’s World Foods categories.

It has been estimated that every £5 spent by a customer at the Irish section is worth a total of £100 at the checkout.

Eddie O’Kane, of O’Kane Irish Foods, which supplies Tesco and other major supermarkets with Irish food products, told The Irish Post he was baffled by the decision to remove the Irish food section from Tesco stores. 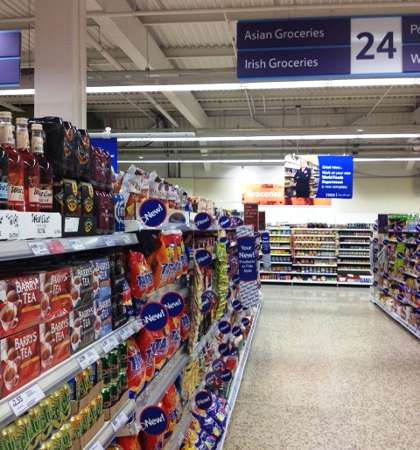 “We certainly see it as a strange development,” he said.

“The World Foods category has been growing rapidly over the past number of years, in contrast to the overall supermarket trend which has been, at best, very flat.

"Tesco had become a destination store for thousands of Irish consumers in the UK who had been previously missing their favourite food products.”

He added: “I believe they intend to keep the top 10 or so sellers, but taking out 49 products leaves choice drastically reduced and it’s doubtful if a credible shopping experience for the Irish customer will remain.”

“The other retailers involved in our project, Morrison’s, Sainsbury’s and Asda, all continue to expand their Irish offer both in terms of range of products and actual stores, which have an Irish section,” said Mr O’Kane, who founded O’Kane Irish Foods in November 2003. “This makes the move by Tesco doubly confusing.”

The news comes less than two months after Tesco published its Annual Report and Financial Statement 2016, where it revealed a return to profit – boasting a statutory pre-tax profit of £162million for the year to February 27, against losses of £6.3billion the prior year.

In the statement the company claims one of the “important changes” they have made over the past year is in “serving shoppers a little better every day”.

“This purpose guides all our decisions and shapes every action we take,” they add.

When contacted by The Irish Post, Tesco described the planned changes as "simplifying their ranges", adding that "a number" of the most popular Irish lines will be going into their main ranges across Britain.

"We review our ranges to deliver the best possible shopping experience for customers.

"These changes will ensure that we continue to offer great availability on the most popular Irish products at affordable prices,” a Tesco spokesperson said.

HAVE YOUR SAY: Do you shop in the Irish aisles at Tesco and how will the move to remove Irish food affect you? Get in touch by emailing [email protected]

A correction was made to this story on May 25 at 17.00 at the request of Eddie O'Kane. Tesco currently stocks 58 Irish products, not 50 as previous stated.