IN his briefing after announcing the football All-Stars team in 2010, then GAA President Christy Cooney inevitably had to field the annual barrage of queries championing the disaffected souls who were omitted.

“In fairness to the journalists, they see games throughout the year and they see nearly all the games,” said Cooney. “So they are well versed in making a judgement call.”

There were certainly holes to be picked in that argument. It is impossible for journalists to attend every game during the summer, especially in July when a fleet of matches are taking place all over the country, most of which only feature on a TV highlights reel on Sunday night.

They are the big games but how many All-Stars selectors would have watched all of those games, especially those which are selectors on both hurling and football teams? What is certain is that they cannot have watched videos of those lesser profile matches. In many cases, footage of many of those matches would not be easy to attain.

Ultimately, there is no way of ensuring selections that please everyone, but introducing statistics would leave far less room for error. Sourcing reliable and compact detail would be difficult and there has long been an argument that All-Stars selections are all about opinion and not facts and figures. Yet how can you make an informed decision unless it’s firmly grounded in evidence?

In the GAA, too much opinion is taken as fact. Yet when that opinion is often dissected with hard analysis, it is seen for what it really is – just merely opinion which too often does not stack up.

A random sample of All-Ireland final man-of-the-match winners over the last decade proves as much. In the 2005 All-Ireland football final, Tyrone’s Owen Mulligan won the award from 14 plays. As well as scoring 0-3, he had a hand in 1-3, including giving the last pass for Peter Canavan’s goal. Yet from 35 plays, Brian McGuigan scored 0-3 and had a hand in six scores. 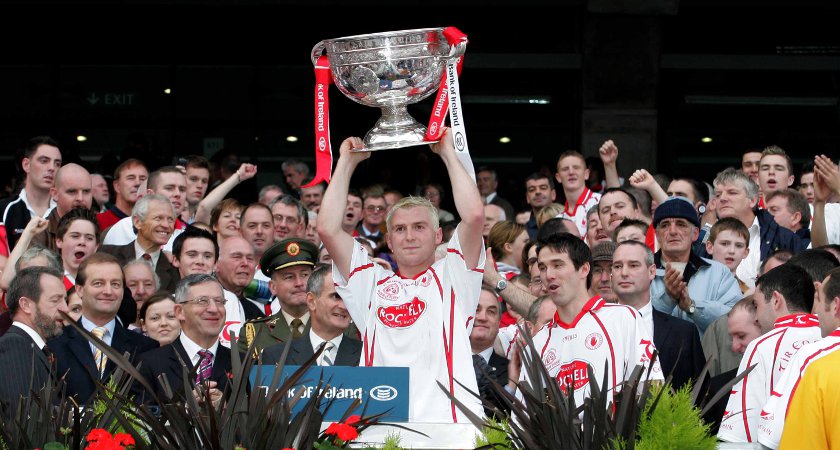 Owen Mulligan lifting the Sam Maguire in 2005 [Picture: Inpho]
Cork’s Daniel Goulding won the award in the 2010 final. Goulding’s place kicking was immaculate and ultimately the difference but he only made five plays throughout the game. Donncha O’Connor should have been man-of-the-match. As well as making 16 plays, scoring three points from play, being fouled for a converted free, forcing a converted ’45, he also gave the last pass for Cork’s two goal chances.

Even with possessions now, and how the game has gone, the player without the ball is as important as the player with the ball, in an attempt to create the space and engineer the openings in blanket defences. In the 2014 final, Kerry’s James O’Donoghue had only one shot at the target because he was creating space and opening up channels in Donegal’s massed defence.

When the hurling and football teams are picked on Friday night, the majority of those selected will deserve the awards. As of now, at least 12 positions look locked down in the hurling, and 11 in football. With so many others vying for those other awards, there are bound to be disaffected souls over not being chosen.

There are always hard cases. Prior to the 2013 All-Ireland hurling final replay, Cork’s Shane O’Neill was in pole position for an All-Star until his claims perished when 4-3 scored off him. Yet how accurate is that assessment either?

If you break down those four Clare goals, how many was O’Neill really responsible for? Shane O’Donnell’s first goal was engineered from hard running through the centre of the Cork defence by Pat Donnellan before releasing the sliotar to O’Donnell.

If O’Neill had stayed with O’Donnell and Donnellan had scored, O’Neill would have been hammered for not closing down the space. It was almost the exact same scenario for the second goal when Conor McGrath laid the ball on a plate for O’Donnell when O’Neill had to go to him.

For Clare’s fourth goal, the harshest critics might say that O’Neill should have closed down McGrath sooner and given him less of the goal to aim at. Yet O’Donnell was inside him and if O’Neill had gone to McGrath and the Clare forward had slipped the ball through to O’Donnell for a fourth goal, there would have been Witch Doctors all over Cork sticking a pin in voodoo dolls of O’Neill throughout the winter.

That example just highlights the difficulty in making selections and forming perceptions of players. The bottom line is that the GAA is still an amateur organisation. It is not like the Premier League here in the UK, where if you want to know the best right-back, the most accurate passer, the player who has made the most assists, the best tackler, it can all be found through Opta Stat's index.

The GAA is not comparable to the Premier League because there are not a set number of games. There is also no appetite for that type of forensic analysis in GAA. Yet the provision of more data and more accurate analysis would definitely enhance any type of selection process.

Otherwise, there will always be disaffected souls after an All-Stars team is announced.