'You're as bent as a nine-bob note': Campaigners' new Line of Duty spoof targets Johnson after Partygate fine

The video was released on Wednesday, the day after the British Prime Minister received a fix penalty notice for breaking his own lockdown rules in June 2020.

Like January's viral video, Led By Donkeys once again combined footage of Johnson with clips from the hit BBC drama to make it appear as though AC-12 are interviewing the PM.

It also criticises Johnson for failing to reveal who funded the £112,000 renovations of his Downing Street flat, which included wallpaper costing £850 per roll.

Reacting to a bumbling Johnson's excuses and denials, the character of DCI Hastings — played in Line of Duty by Irish actor Adrian Dunbar — hits back.

"You must think we were born yesterday, fella," he says in the video. 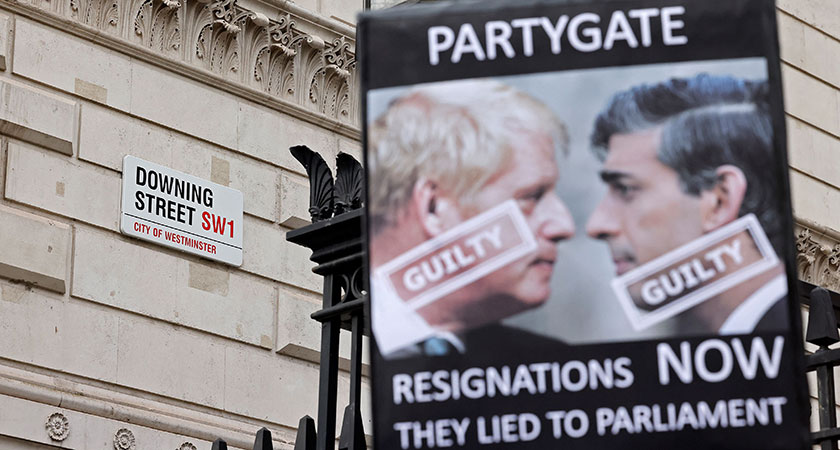 A placard being held outside Downing Street on Wednesday calling for the resignation of Boris Johnson and Rishi Sunak (Image: Tolga Akmen /AFP via Getty Images)

The video has been viewed more than 2million times on social media and was shared by Line of Duty creator Jed Mercurio.

It was produced by activist group Led By Donkeys, which has become known for its high-profile viral campaigns criticising the government.

The film also addresses other controversies, including the PM's relationship with Jennifer Arcuri and Owen Patterson's breach of lobbying rules.

The government controversially backed a vote to overhaul the Standards Committee to prevent Patterson from facing a suspension, after he was found to have breached the rules.

"You are finished here, Prime Minister," concludes the DCI Hastings character at the end of the video.

"You are finished with lying to us and that’s only the start of it.

Johnson, his wife Carrie and Chancellor Rishi Sunak were fined this week for breaking lockdown rules to attend a Downing Street birthday party for the PM in 2020.

The PM apologised, despite having previously claimed he hadn't broken any rules.

According to the Guardian, Johnson could face three further fines for events that have yet to be fully investigated by police.