IRISH boxing fans haven’t had a whole heap to cheer about recently, especially when it’s come to big Ireland vs England clashes, but they have a chance to put their woes behind them this Saturday when Belfast’s Carl Frampton lays his IBF super-bantamweight title on the line against Bury’s WBA 122lb champ at the Manchester Arena.

Hard-core fight fans have waited patiently as the topsy-turvy rivalry between the unbeaten pair gestated into potentially the biggest fight in the history of the super-bantamweight division. The route to finally making the fight has been via sticky and tangled web with both fighters legitimately claiming supremacy over the other at various junctures along the way.

“It’s the fastest selling sporting event of all time at the Manchester Arena and the venue will be split into two sections with 10,000 Irish, 10,000 English. I think it’s going to be an atmosphere like never seen before on a night of boxing,” claims Quigg’s promoter Eddie Hearn.

Frampton, 21-0-0 (KO 14), guided by Hall-of-Fame fighter Barry McGuigan, was little more than a six fight novice and only in the first year of his pro career when a domestic dust-up with Scott Quigg was first mooted. By this time Quigg, 31-0-2 (KO 2), then promoted by Ricky Hatton, had already notched up over 20 wins and wrapped the WBA Intercontinental belt around his waist. By 2010, both fighters had earned victories over Gavin Reid and Yuriy Voronin and the comparisons began to grow.

“Even as we were coming through, when we were both prospects, people were comparing who’s the better fighter. But, when I become British champion that’s when it really started getting interesting. We are both world champions. We’re both still undefeated. I believe this is the perfect time for me to go out there and do a job of it,” exclaimed a confident Quigg.

The McGuigan connection ensured Frampton quickly became the darling of the Northern Ireland press, but it was not until 2011 when Eddie Hearn, Head of Matchroom boxing, came on board, giving Frampton mass exposure on the Sky Sports platform, that his popularity really shot.

All of the pieces of the jigsaw were now in place and the combination of the Tigers Bay fighter’s exciting style, power punching and amiable personality quickly saw him turn from a small hall favourite to a super star and filling out the Odyssey Arena in Belfast. All eyes were now on Frampton. Spectacular demolition jobs over Kris Hughes, former world champion Steve Molitor and Kiko Martinez had made Frampton the hottest prospect in Britain and Ireland. 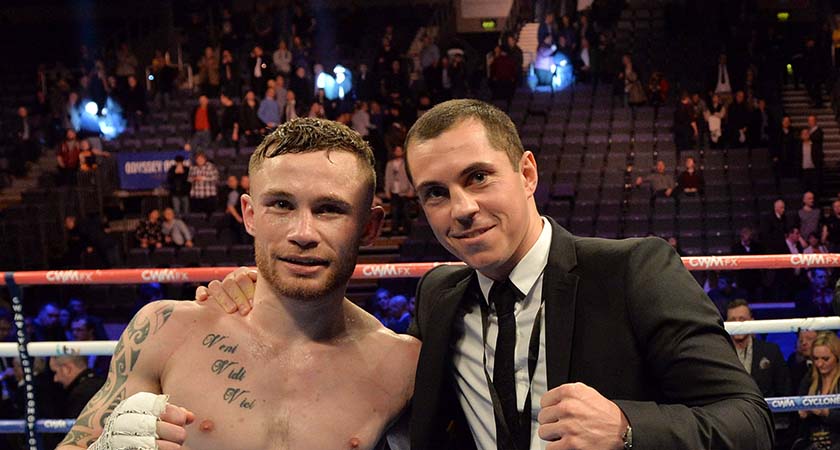 McGuigan, Frampton’s manager, then wanted a slice of the now juicy promotional pie that Hearn coveted. An agreement couldn’t be made and the pair parted ways with Frampton heading with McGuigan to BoxNation. In the meantime, Quigg won an interim WBA world title, which prompted Hearn to opportunistically switch positions and swoop to sign Scott Quigg in early 2013. Since then things have been rather bitter, political and awkward between the respective Quigg and Frampton camps and at times it looked like a fight between the two may never get made due to clashes of personality, arguments over a share of the purse and television deals.

Frampton attempted to break into the lucrative Stateside scene last July. ‘The Jackal’ was matched against a previously unheard of and unheralded Alejandro ‘Cobrita’ Gonzalez, who was there to ensure Frampton impressed on his nationally televised US debut. The fight did not follow the script.

The Belfast boy was dropped twice in the first round, adapted well but looked relatively mediocre en route to a points victory. It wasn’t the desired outcome. To compound the effect of that poor showing, later that night Quigg enjoyed the best win of his career, a stoppage of Kiko Martinez in two rounds.

Quigg’s trainer, the newly crowned Ring Magazine ‘Trainer of the Year’, Joe Gallagher believes his man has the beating of Frampton and isn’t shy in rubbing salt into the wounds regarding the Jackal’s foray into in the American market.

“Carl went over to America last time out and got put down early. He’s come back now with his tail between his legs. He’ll be going into the fight with some doubts. I know once Scott Quigg starts connecting to the head or body that Carl Frampton will be in deep trouble,” said Gallagher, who has Irish parents and was last week honoured for his services to boxing with a civic reception in Sligo.

Frampton sees the picture a little differently, believing that his indifferent showing versus Gonzalez has acted as a lure and is the only reason that Hearn, Gallagher and Quigg now have the guts to agree to the showdown.

“I’m going to call it a blessing in disguise, because if I had went in and blew Alejandro Gonzalez away in one or two rounds, then I wouldn’t be fighting Scott Quigg,” blasted the Belfast pocket rocket.

“I’ve been chasing Scott Quigg for a long time. I’ve been chasing him for at least four years when he was British champion, and it’s only now that they want the fight. But, I’ll need to be at my best to beat Quigg. And so far in the gym everything’s looking like you’re going to see the best ever Carl Frampton.”

Frampton taking part in a public work out at Trafford Centre on February 23, 2016 in Manchester, England [Picture: Getty]
Quigg is weary of a boisterous crowd cross the Irish Sea and creating a hostile atmosphere for him in his hometown.

He said: “The Irish are passionate about the sport and boxing really is one of the bigger sports that the Irish get behind. They get behind their and they create a great atmosphere. But the rivalry between the English and the Irish will be even bigger because we’re both at the top of our game. There’s a lot riding on this, and there’s a lot of pride at stake, the atmosphere in the arena is going to be absolutely electric.”

Something Frampton is keen to downplay: “I think that’s what Eddie Hearn and Quigg are trying to make out here that this is Ireland versus England. It’s not. I have fans from all over the UK and all over Ireland.”

All of the wrangling over the crowd, venue and purse will be immaterial when they step through the ropes on Saturday night. Both fighters freely admit that they are facing the toughest opponent of their career and they can’t put a foot wrong if they are to emerge victorious and go on to face the universally recognised number one in the division, Cuban maestro Guillermo Rigondeaux.

Quigg enjoys a height and sizeable reach advantage and much has been made of his drive, determination and dedication in the build-up, but Frampton believes that his raw natural talent will be the deciding factor on the night.

“I think both of us have got better since we were first compared, but I think I’m head and shoulders above this guy. I don’t want to take Scott Quigg lightly. I don’t want people to think I’m looking past him. I’m not. I’m training very, very hard for this fight. If I put in 100 per cent, if I put on the best performance I can, and Scott Quigg puts in the best performance he can, then I win the fight and it’s not even close. If I perform my best and there’s only one winner,” uttered a determined Frampton.

The pair are so evenly matched that it is hard to separate them, largely the reason that they have been able to build this into a Pay-Per-View fight, a rarity for a domestic sub 140lb clash.

Quigg employs a tight defence and high work rate. Combine that with his significant reach advantage and it isn’t hard to figure out what the Bury boxer’s tactics may be. The squat muscular Frampton is no stranger to giving away height and reach. He is technically the superior boxer, comfortable pressuring forward or cutely countering off the back foot.

It is poised to be a scintillating thriller but Frampton’s power, fleet footwork and masterful sense of timing should be the key to unpicking the Quigg lock, although he will need to be able dictate the timing of the fight for his game-plan to be effective.