KEVIN O'LOUGHLIN salvaged a point for London with a close-range free deep into added time to earn a draw with Kildare at the Irish TV Grounds in Ruislip on Saturday.

The crucial point ended a physical, pulsating and thoroughly entertaining game of hurling which ended London 1-11 to Kildare 0-14.

The sides were level at five points apiece at half-time, but Martin Duggan netted the only goal of the game with the first score of a tense second-half, turning John Doran inside out before rifling an unstoppable strike past Paul Dermody in the visitors' goal.

That goal should have handed London the initiative but Kildare never let their opponents out of sight, and they clawed their way level with nine minutes remaining thanks to the sharp shooting of full-forward Gerry Keegan and midfielder Martin Fitzgerald in particular.

London had captain Kevin Reid to thank for keeping their own tally ticking over with his four points from play, as regular free taker O'Loughlin found his range with four points from dead balls in the second-half after a disappointing display in the first.

Kildare substitute Mark Delaney thought he'd won the game with a sublime injury-time point to edge the visitors in front, but an infringement at the other end allowed O'Loughlin to pop over a simple free after three minutes of stoppage time, ensuring both sides picked up a point.

Brothers Pearse half-forward Reid began the game as he would duly go on, scoring a delightful point on the turn to open the scoring for the Exiles on three minutes, but Philip Cocoman responded immediately with an equally good score from play.

Despite the wind behind their backs in the opening period, London opted for a short game with most puck-outs being played short to corner-back Thomas Lawrence, who linked up well with Fergal Collins and Bill Walsh down the flanks.

The visitors missed an early goal chance when the sliotar fell kindly for Keegan, who pulled on the loose ball, but his firmly struck effort was deflected clear by Eoin Kelly in the London goal. 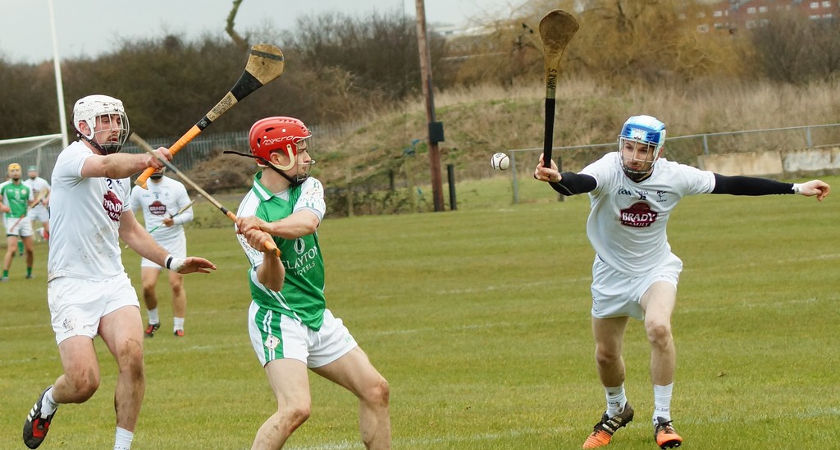 A free apiece from Reid and Keegan took the score up to two points each before Kildare took the lead in the game for the first time through the latter's first point from play after 15 minutes.

Joe Quaid's side threatened to take control of the game at that point as Mark Moloney collected a sideline cut, drove at the London defence and steered over one of the best points of the match to hand Kildare a two-point advantage for the first and only time throughout the match.

Back-to-back points from Reid soon dispelled that notion, but Keegan missed a golden opportunity to send his side into the break with a goal to their tally, pulling wide from a tight angle after Kelly left his goal gaping having misjudged the flight of the sliotar.

Two neat scores for either side before the whistle, courtesy of Declan Flaherty for Kildare and Daryl Roberts for London respectively, took the sides in level at the break.

Kildare 'keeper Dermody denied Duggan with a spectacular, albeit exaggerated, diving save moments after the restart, but there was little he could do when the Kilburn Gaels forward subsequently produced an almighty catch, broke free from his man and nestled his effort in the back of the net.

To their credit, the Lilywhites responded well with two points from their main man Keegan, the latter of which came from a free after Flaherty had been fouled by London corner-back Chris McAlinden.

O'Loughlin, who had scored 3-19 in his first two appearances of the season for London, finally regained his composure after shooting three wides, and his brace of frees in the second-half helped take the score up to 1-09 to 0-11 in London's favour with 10 minutes to play.

The sides then went level for the first time since the goal as Fitzgerald dug deep to pull out a long range effort, which sailed over the black spot from distance. And the midfielder was at it again soon after, handing Kildare the lead.

Tempers threatened to boil over amid a tense finale, and although Kildare had a number of disputed wides go against them, they looked to be in the ascendancy on the final stretch, but O'Loughlin drew the sides level once again with his third free of the second-half.

Reid had another big chance for a second London goal, but he shot wide when the safer option might have been to take the point.

At this stage, it was anybody's game, and Delaney looked to have won it for the visitors with a fine effort from out wide left after a minute of stoppage time, prompting a delirious reaction from the Kildare bench.

However, London got on with proceedings and pumped the ball up-field in desperation, and they were given the benefit of the doubt when a mass scramble for possession emerged, with referee Eamonn Hassan spotting a foul somewhere in the midst.

It went London's way, and O'Loughlin showed no signs of crumbling under the pressure of a simple free – fairly central around 20 metres out – sticking it over in the last act of the game.

Man of the match: Kevin Reid (London). The half-forward was a thorn in the side of Kildare from start to finish.

Score of the match: Mark Delaney's stoppage-time effort for Kildare would have been good enough to win any match on another day.