THREE first half goals helped Galway secure only their third ever All-Ireland camogie championship with a comprehensive 3-14 to 0-17 win against Kilkenny.

Two goals from Ailish O'Reilly and a Niamh Hanniffy strike put the Tribeswomen in the boxseat early on and despite a late rally, Kilkenny couldn’t force their way back into the contest.

A record attendance of 24,730 saw Galway, Westmeath and Kerry make camogie history on a special weekend for the sport at HQ.

In the main showpiece, Oranmore-Maree clubwoman O'Reilly grabbed her sides opening goal after two minutes as Galway raced out of the blocks. 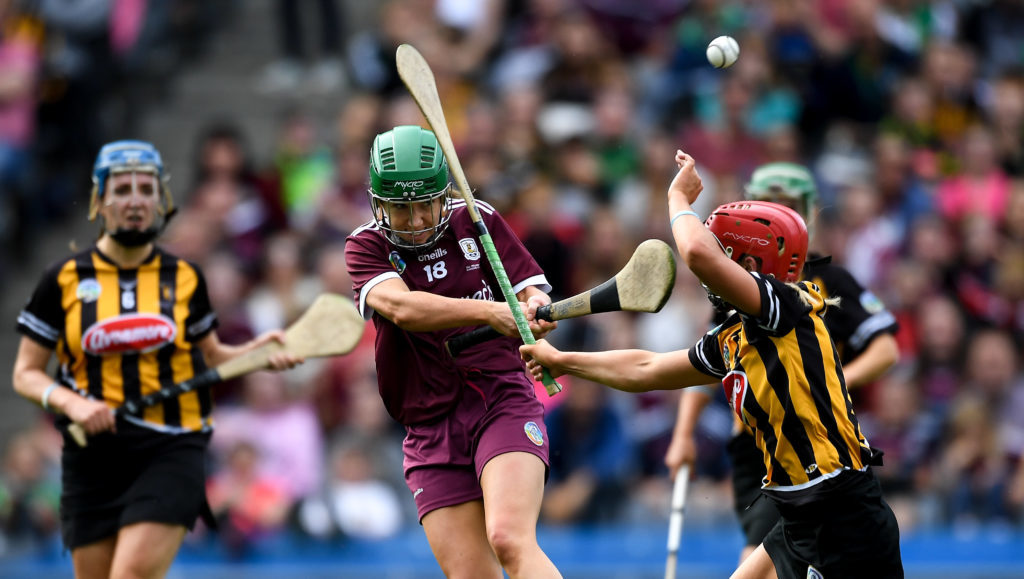 Catherine Finnerty of Galway in action against Edwina Keane of Kilkenny during the Liberty Insurance All-Ireland Senior Camogie Championship Final match between Galway and Kilkenny at Croke Park in Dublin. (Photo By Piaras Ó Mídheach/Sportsfile via Getty Images)

Although Kilkenny came back into contention thanks to the efforts of Michelle Quilty, quick-fire goals from Hanniffy and O'Reilly in a crucial three-minute spell before the break gave Galway the psychological advantage and ensured they went in six points to the good at the interval.

However, Galway dug in and the six point winning margin didn’t latter them.
“2013 feels like a lifetime ago. I flew off on Erasmus a few days later so I didn’t appreciate it
enough.

"By God am I going to enjoy this one,” O'Reilly told The Irish Post after the match.

Earlier, Galway's Intermediate side failed in their quest for All-Ireland honours.

Eleven years after claiming Junior B silverware, and just three after their Premier Junior win, Westmeath now find themselves playing All-Ireland Senior Championship Camogie thanks to a 1-11 to 1-9 win over Galway.

It was a case of back to the future for Pamela Greville, with the 36-year old a part of all of those All-Ireland triumph's, and picking up another All-Ireland medal on Sunday alongside her 15-year old daughter Stephanie, with her brother Johnny as manager.

Galway powered to a 1-8 to 0-4 interval lead, with Ava Lynskey netting their goal.

However, Westmeath stormed back on the resart, with Pamela Greville  leading the scoring charge (0-9), while Mairead McCormack netted a goal.

"Senior Camogie – that’s been our aim for a few years now. It shows, when you put your mind to it what people can too. It’s a brilliant Westmeath team and I’ve loved every minute of being with them,” Pamela said.

In the opening game, Kerry won their first Adult Camogie title at Croke Park, thanks to an 0-11 to 0-8 win over Limerick in the Premier Junior decider. Patrice Diggin had a birthday to remember, scoring five points, and also claiming the 'Player of the Match' award, on a day where Ian Brick's side fired 14 wides.

“The girls have been fantastic all year. There were hooks and blocks and interceptions all over the field. I have nothing but praise for them and it’s absolutely deserved,” he said.