WHOEVER said the inter-county scene is dead in Britain would need to catch themselves on, because Lancashire and London produced a truly memorable game in Pairc na hEireann on Sunday.

They left everything on the pitch and both teams were exhausted as the final whistle blew. Lancashire were exhilarated after making a Lazarus-like recovery, while the London players looked like they had just been sentenced for a crime they didn’t commit.

The contrast was startling. If ever there was a game of two halves then this was it. London owned the first-half and should have gone in more than five points ahead while Lancashire totally eclipsed their southern opponents in the second-half to deservedly win a pulsating game.

In between we were treated to great points, goals, a missed penalty, black cards and some fine individual performances.

London played into a moderate wind for the opening half and registered the first score of the game from a Niall Campbell free-kick after he was pulled down by Michael Collins. This was soon followed by another place ball for London as John Daly hit a monster effort from near the sideline.

Lancashire managed to get up and running when a great catch in the middle of the field by Stephen Sands led to a Michael Molloy point. They followed this up with a Chris Mullen effort after he turned into space to fire over the equaliser.

London began to boss matters in midfield, leading to more pressure being put on the Lancashire fullback line; and it was creaking. Finally, the pressure told when Alfie McNulty was tripped by Gary Morris, resulting in a penalty.

However, Daly’s ferociously-hit shot was well saved by Michael Donnelly in the Lancashire goals as he jumped down to his right-hand side. 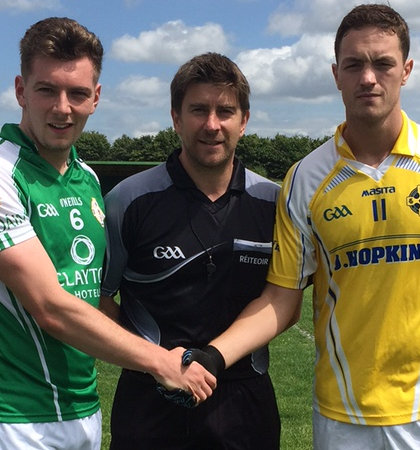 Eventually, London got their just reward. A great team move involving Patrick Irvine and Daly led to Campbell firing the ball into the back of the net. London were superior in every facet of the game, none more so than in the half-forward line where Irvine was giving the usually reliable Paraic McGuirk a tough time.

London led 1-2 to Lancashire’s 0-2 and this was extended by flying wingback James Grant, who pointed from a narrow angle. Molloy managed to stem the tide somewhat, after Darren Russell collected a poor kick-out from Hallisey, to feed the Donegal man who accepted the gift to tap over the bar.

Back came London again and with devastating consequences. The same three players involved in the first goal; Campbell, Irvine and Daly interweaved their way through the Lancashire defence once again, and this time it was Daly who smashed the ball into the net.

The Lancashire defence was being led on a merry dance and it had no way of stopping the relentless London attacks. The sound of the half-time whistle came to Lancashire’s rescue, just after Ciaran Harper managed to close the gap by one point to leave the score at half-time; London 2-3 to 0-4 for Lancashire.

Lancashire were lucky the deficit was only five points as it could have well been in double figures. London were playing very good football, but they were helped by Lancashire’s sloppy handling and lacklustre approach in defence.

Liam Coyne had his troops out early for the second-half as they tried to make amends for their poor first-half showing. They started well. Straight from the throw-in, Sands gathered the ball and galloped forward to pop the ball over the bar with the instep of the foot.

Lancashire, however, were panicking; instead of taking simple point chances, they were going for goals and on each occasion they did not have the composure to finish with a major.

On one occasion, however, they struck gold. The impressive Molloy dinked his way past Richard Ellis to feed the imposing Gerard McAughey and the Tyrone man duly smashed home.

This seemed to lift the Lancashire boys and in the space of 10 minutes, the gap was only one point and the game was on. Sands, in inspired form now, added another to level up matters as Lancashire took complete control. 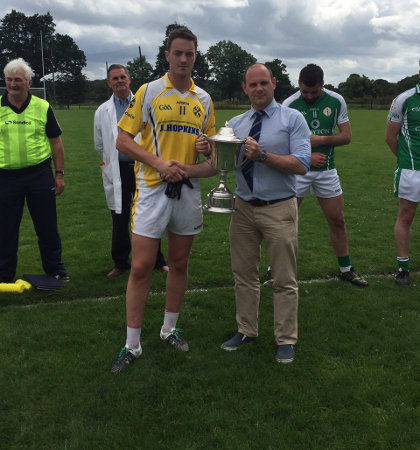 Whatever was said at half-time clearly worked, as they came out a different team. The full-back line had tightened up with Ronan Gallagher and Michael Collins getting to grips with their men, while McGuirk became a rock at centre back.

Lancashire then took the lead for the first time when Molloy showed brute strength and breath-taking balance to score a fine point. Shane Buckley, who was starring throughout the game for London, then hit the Exiles’ first score of the second-half when he let fly from far out to split the posts. However, this was quickly cancelled out by the irrepressible Sands.

With eight minutes left, the score read Lancashire 1-8 to London’s 2-4, and it seemed there would only be one winner as the momentum was clearly with the Saffrons.

A Molloy free pushed them two ahead with time quickly running out. Back came London again and a fisted effort from substitute Mark Gilsenan narrowed the gap to one, but Lancashire refused to wilt.

A surging run from McGuirk from his own full-back line deep into London territory resulted in an easy chance for Molloy which he did not miss. By now the game was deep into injury-time and only a goal for London would suffice.

A Daly free brought the arrears back to just one, before a late effort was blocked by a flying Gary Morris, and a shot from Buckley drifted agonisingly wide. This signalled the end as the referee blew the whistle.

Lancashire were champions and were well worthy of the Sam Maguire Cup for their spirited second-half performance. It was such a topsy-turvy game, that the result was in doubt until the final whistle and this is what made it such a magical game.

They will face Kerry in the All-Ireland Junior Football Championship semi-final on Saturday, July 23, at Old Bedians in Manchester.

A final remember; inter-county football in Britain is alive and kicking.