Why Conor Hourihane can shake up O'Neill's Ireland squad

AFTER rescuing a point in Serbia, Martin O’Neill will be hoping to pick up maximum points against Georgia and Moldova next month.

Despite labouring to victory by the narrowest of margins (twice) over the Georgians in Euro 2016 qualifying, Ireland should have too much for Vladimir Weiss’ side.

Whether O’Neill feels he needs to bolster the squad to overcome Georgia and Moldova, or that he can afford to give some game time to fringe players, it could be the ideal time to draft Barnsley’s Conor Hourihane into the national team.

The 25-year-old from Cork has been named Championship Player of the Month for August after an impressive start to life in the second tier.

His two goals and four assists meant he had a hand in half of the Tykes’ league goals in the opening month, and he has been the driving force that has seen the side quickly re-adapt to life in the Championship after a two-year absence.

The 4-0 away win at Wolves last Tuesday, in which Hourihane grabbed the opener, left them third, a point off leaders Newcastle.

Although their impressive form is probably no surprise given the transformation Barnsley experienced after Hourihane replaced Alfie Mawson as captain at Oakwell last December.

The Tykes were in the League One relegation zone after winning just six of 21 games before then manager Lee Johnson gave Hourihane the armband.

Despite a 2-0 reverse to eventual champions Wigan in the first game under his captaincy, Hourihane then inspired the Reds to 16 wins and five draws in the remaining 24 league games to snatch the last playoff spot on goal difference. 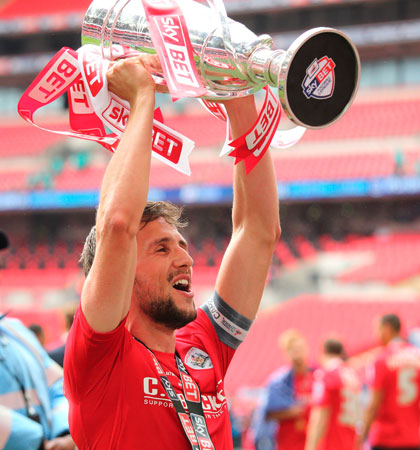 The Championship's player of the month for August captained Barnsley to playoff success last season [Image: Getty]
Three convincing wins in the playoffs ensured promotion which, coupled with a Football League Trophy success, ensured a season of glory for Hourihane and the Tykes when all was doom and gloom just months earlier.

Clearly a proven leader, Hourihane’s current good form – which has led to interest from Celtic, Rangers, Aston Villa and Wigan – is no flash in the pan either.

The boy from Bandon hit 10 goals and weighed in with 13 assists in the league last season.

The season before he managed the same number of assists but scored 13 goals in League One.

No wonder former club Plymouth fought tooth and nail to keep him, only relenting after three bids from Barnsley and accepting they would lose the Cork man for nothing 12 months later.

“Conor’s award is fully deserved, it’s a reflection of his performances,” said Hourihane’s current manager Paul Heckinbottom of his player of the month accolade.

“Although he’s stepped up a league, Conor’s performances have just continued to improve and it shows the strides he’s making.

“It’s fully deserved and hopefully now if he keeps this run of form going and reproduces it in the next month, he’ll be pushing for an international call up.”

Heckingbottom isn’t the only manager for which Hourihane has played who believes he can make the grade at international level.

After a man-of-the-match performance in a 4-1 win over Swindon last September, former boss Johnson was convinced the uncapped Hourihane would be on the plane to France if Ireland made it.

Speaking to the Barnsley Chronicle after that game, Johnson said: “Conor is 100 per cent ready for the step up to international level. He has shown quality over a number of seasons.

“They should be watching him because he is one of the best players in his position in this division.

"There is no one better as a left-sided attacking centre midfielder and, if I was the Ireland manager, I would be keeping a close eye on him and looking to call him up for the next squad.

"If he keeps up Saturday's level of performance then there is no reason why he shouldn't be in the squad if Ireland go to the Euros.

"That is what he has got to aim for. It will be his marker." 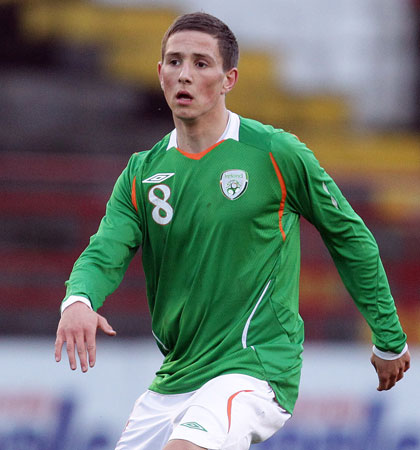 Hourihane has eight caps for Ireland at U21 level [Image: Inpho]
And Hourihane already has a potential cheerleader in the Ireland camp.

Watching him in that 4-1 rout of Swindon, when he made two and scored one, was fellow Cork man and Hourihane’s hero, Roy Keane.

The Ireland assistant manager has clearly seen something he likes about the midfielder, having previously worked with him twice.

Hourihane joined the youth set-up at the Stadium of Light during Keane’s tenure, although never made a first team appearance.

He then turned down a new contract from the Black Cats, opting instead to sign the one-year deal offered by Ipswich to link up once again with Keane.

Again he failed to make a first team appearance before Peter Reid gave him his break at Plymouth in 2011.

Where would Hourihane slot into O’Neill’s Ireland side though?

The manager appeared to opt for a 4-1-4-1 formation against Serbia after employing a diamond formation in France.

Hourihane previously plied his trade in a midfield three for Barnsley with Johnson saying the midfielder couldn’t play in a 4-4-2 or 3-5-2 set-up.

However when Johnson shifted to a 4-4-2 formation, Hourihane adapted. And thrived.

Whether O’Neill opts for a diamond or a 4-1-4-1, Hourihane could feasibly slot into one of the two midfield places in front of Glenn Whelan.

Hourihane may have a job shifting James McCarthy and Burnley’s new record signing Jeff Hendrick, but he has proven he can adapt to a different system.

With McCarthy ruled out by Everton for another two weeks, there may be an opportunity for the Cork man.

Goalscorer Hendrick and Robbie Brady meanwhile failed to shine in the draw with Serbia, with the former taken off in the second half and Brady switched to left back.

Both were poor in possession and resorted to launching long balls forward.

Hourihane’s passing and vision – he boasts a pass success rate of 81 per cent and averages an impressive 2.3 key passes per game – could see him challenge for a place in the Ireland midfield.

O’Neill could do worse than at least include him on the bench for the next two qualifiers.

Surely a proven leader, who can score, create and adapt, could prove invaluable to the manager on the road to Russia?