On this day in 2009: Henry's handball breaks Irish hearts

IN the end, it was a day defined by three slaps.

The first two, from Thierry Henry, lead to the third: the slap in the face of every Irish person watching on in shock and disgust.

Not only had we seen our World Cup dreams severed right at the death, we'd been cheated, inexplicably cheated. 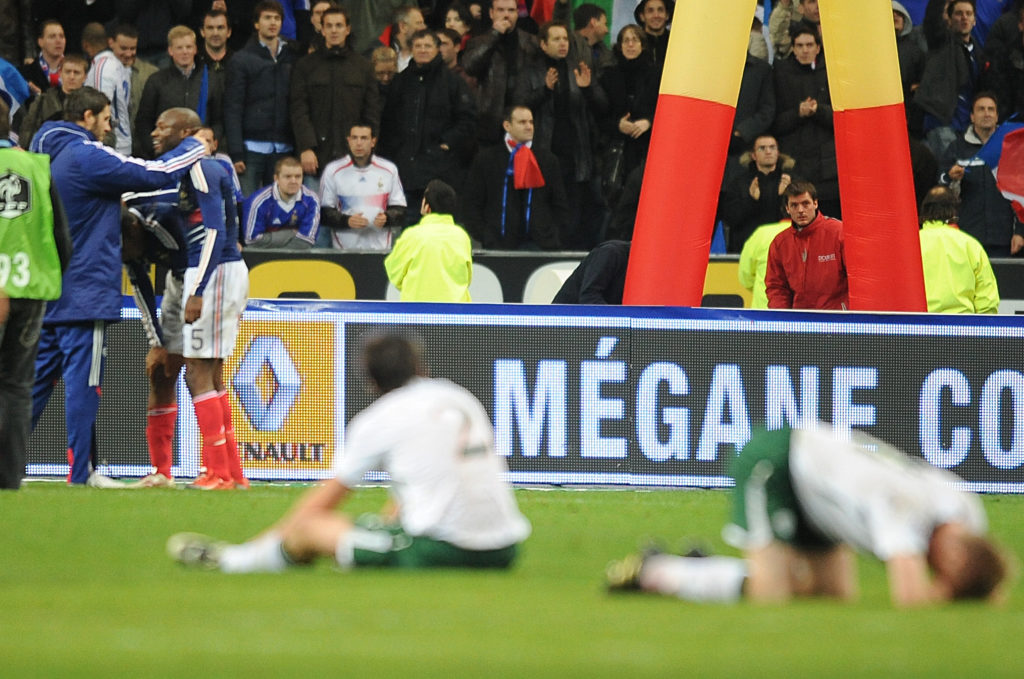 French defender William Gallas (2ndR) is congratulated by teammate as Irish players look dejected at the end of the World Cup 2010 qualifying football match France vs. Republic of Ireland on November 18, 2009 at the Stade de France in Saint-Denis, northern Paris. Former champions France secured their World Cup spot after a 1-1 draw with the Republic of Ireland at the Stade de France. France won the two-legged tie 2-1.

Ireland had been experiencing something of a Renaissance under manager Giovanni Trapattoni following underwhelming tenures from predecessors Steve Staunton and Brian Kerr.

An impressive end to the qualifying campaign, including two un-fancied draws against Italy saw Ireland secure a second-place finish and a place in the play-offs.

The Green Army's last appearance in a major tournament was in 2002, and after seven-and-a-half years of pint-launching, channel-changing, pillow-thumping frustration, Ireland were nearly back in the big-time.

An unfavourable draw against France made the task a lot harder, but a narrow 1-0 defeat in the first-leg gave the Irish hope that a solid performance in the return leg would be enough to qualify.

It was all going well, too. Robbie Keane gave his side the lead after half an hour to level the tie, and the French began to shake. Disappointing performances in qualifying and whispers of dressing room unrest had been plaguing Ireland's opponents, and with both sides having plenty to loose, the game turned to a Prince Andrew level of uncomfortably cagey. 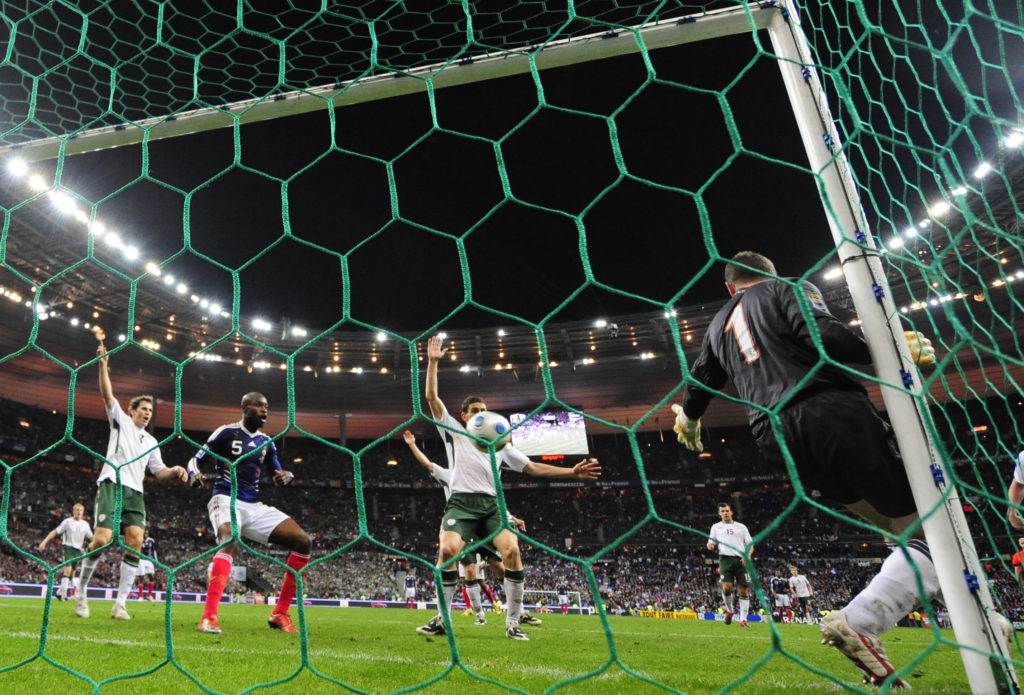 With the game looking set to go to penalties, a lofted punt from a deep French free-kick suddenly changed the dynamic.

As the ball dropped to the back-post and looked almost certainly to sail wide of Shay Given's net, a lurking Thierry Henry patted the ball with his hand to keep it on the pitch, and again to set himself for a point-blank volley across the goal-mouth.

It happened in a flash. Va Va Voom. 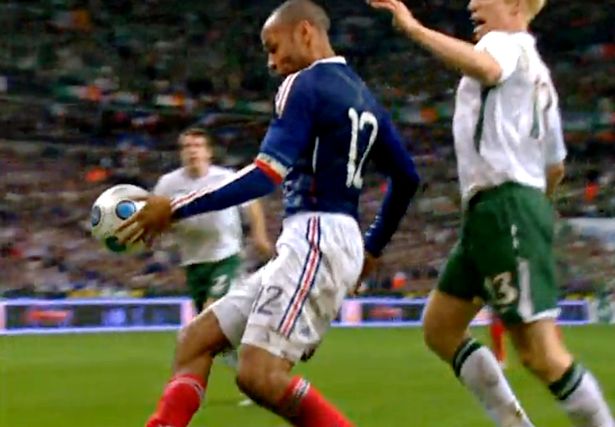 William Gallas stabbed home the cross to put France ahead, and simultaneously stabbed the collective hearts of every Irish man, woman and child watching.

The Irish players swarmed the Swedish referee, incensed that the handball hadn't been spotted. Even Trapattoni, who was 70-yards away was instantly appealing for the very thing four professional officials somehow hadn't.

The goal was given, and there was nothing to be done. France, buoyed by the relieved elation of their late goal, managed to hold on.

Ireland, who had performed so valiantly, couldn't come back from such an unjust and sudden sucker-punch. 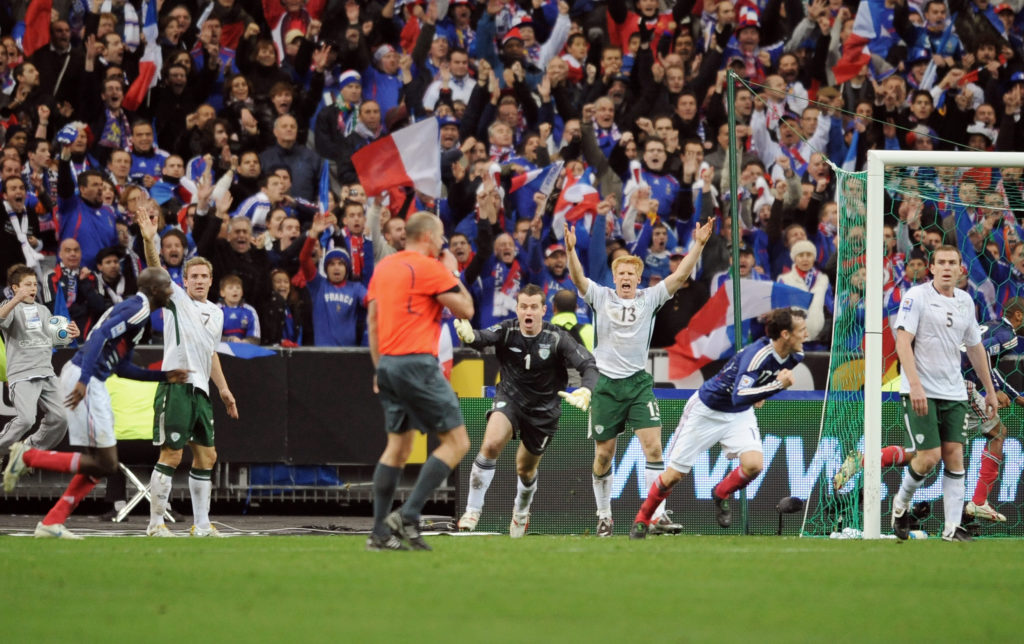 It was a knuckle-duster under the boxing gloves kind of moment. The cheating, coupled with the reality of what had been lost, was almost too much to bear.

The black-hatted Henry apologised after the match, claiming that he "didn't mean" to cheat. But it was the hollow way he sat with a devastated and exhausted Richard Dunne on the turf at the final whistle which just felt like rubbing salt in the wounds.

"I don't know what good that does," said Dunne while talking about the Frenchman's decision to admit to him that he'd handled the ball. 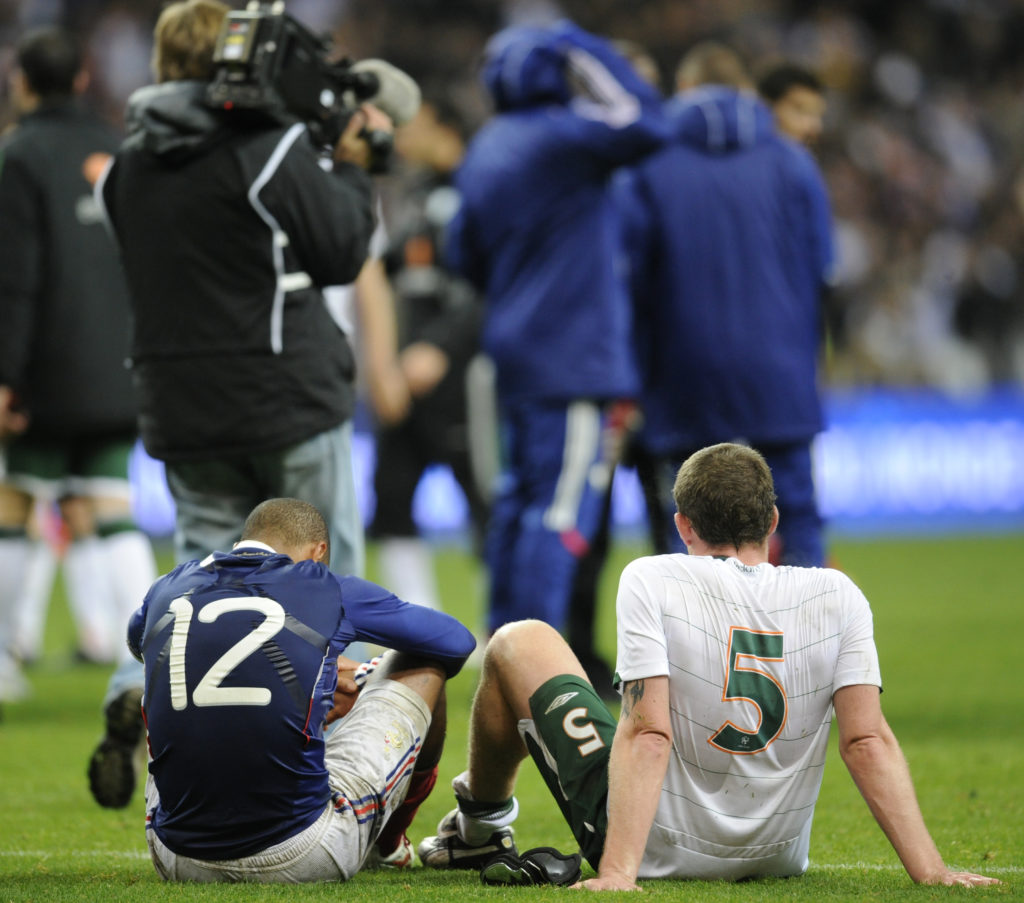 French forward Thierry Henry (L) and Irish defender Richard Dunne are pictured at the end of the World Cup 2010 qualifying football match France vs. Republic of Ireland on November 18, 2009 at the Stade de France in Saint-Denis.

As much as the heartache of being tripped up before the final hurdle is a pain which still endures in Ireland, it's easy to forget that we weren't the only ones robbed that day.

Martin Hansson, who refereed the match was denied a place at the World Cup finals too, due to the controversy and storm around him and his team failing to spot such a blatant act of cheating.

"I won't speak with him," the Swedish official said when asked what he would do if he saw Henry again.

Speaking to The Athletic, Hansson recalled how he was "inconsolable" when an official from the Irish FA knocked on his door after the match.

"We knew what it meant for Ireland and we also knew that, for us [his refereeing team], the World Cup in South Africa didn't exist any more.

"He wanted to shake our hands. 'Gentlemen,' he said, 'of course it is a mistake but we blame the player, we don't blame you. It's big, big cheating from the player'. That was unbelievably good of him."

Prior to the fracas surrounding the handball, Hansson believed he'd put on one of the best performances of his career, assured that it would guarantee him passage to the World Cup the following summer.

But after the smoke cleared, and the ramifications of the situation had become apparent, he can only now look back on the game as one of his very worst performances, sadly.

"I'm just grateful that I had very good friends during that time," he said.

"I had a lot of support. Referees from all over Europe were texting me. Many more than I would ever have thought.

"It was a catastrophe for Ireland. They were so close to the World Cup, and it's such a big thing. Fantastic people, too."

The endless foraging for a World Cup trip half-way across the globe that will love everybody's problems remains open to both hopeful and cynical fans a like, but for Hansson and for the Irish side playing under the Parisian lights that evening, that chance won't ever come again.