DUNDALK’S European campaign is over for another season, after they lost 3-1 on the night and 4-1 on aggregate in their Europa League Third Qualifying Round second leg tie against Slovan Bratislava last Tuesday.

In a game played at Shamrock Rovers' Tallaght Stadium, as Oriel Park does not meet UEFA regulations for the later stages of UEFA competitions, Dundalk were always up against it once the Slovakian champions doubled their aggregate lead with a 12th minute goal from Rafael Ratao.  ​

The striker's powerful header from an Andraz Sporar cross put the Slovak side in control, and it was pretty much game over when Andy Boyle’s attempted header back to goalkeeper Gary Rogers was intercepted by Aleksandar Cavric, who deftly lifted the ball over Rogers for a second goal on the night on 33 minutes.​

Dundalk kept battling, and got their reward with 20 minutes remaining when Michael Duffy pulled a goal back, and moments later had another chance when they were awarded a penalty for a handball, but Pat Hoban's spot kick was saved by Slovan keeper Dominik Greif.​ 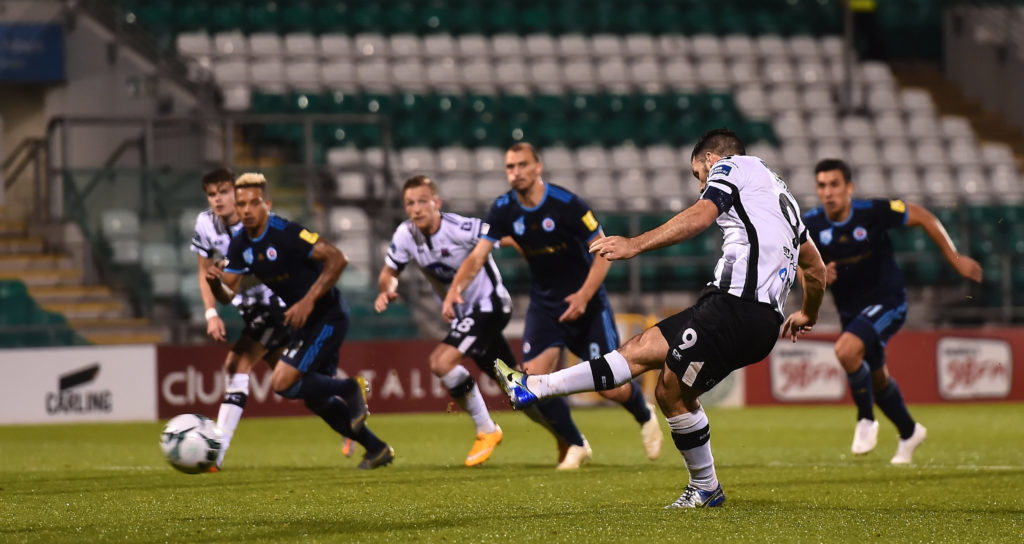 Patrick Hoban of Dundalk takes a penalty which is saved by Dominik Greif of Slovan Bratislava during the UEFA Europa League 3rd Qualifying Round 2nd Leg match between Dundalk and SK Slovan Bratislava at Tallaght Stadium in Tallaght, Dublin. (Photo By Eóin Noonan/Sportsfile via Getty Images)

The Slovakians rounded off a good night's work in stoppage time with a third goal on the break from  Eric Daniel to seal the win, and end the SSE Airtricity League’s interest in European competitions for another year.

However, on their return to Premier Division action on Friday, the Lilywhites bounced back from their European setback with a thumping 5-0 win against Finn Harps, although they took a while to get going and were helped in no small way by some poor defending by the visitors.

The opener arrived in the 36th minute Daniel Kelly pounced on a misplaced pass to fire home, and it got worse for Harps just before half time as they were reduced to ten men when Mark Russell was shown a second yellow card.

Georgie Kelly took advantage of another defensive mistake to make it 2-0 just after the hour, and four minutes later Patrick McEleney made it 3-0 from Cameron Dummigan's cross.

McEleney then turned creator to set up Jamie McGrath for Dundalk's fourth goal, and the roles were reversed a minutes from time when McEleney added a fifth with a cool finish from a McGrath pass.

Dundalk remain seven points ahead of Shamrock Rovers at the top of the table, although the Hoops kept on their tails with a 2-0 win over Derry City at the Ryan McBride Brandywell Stadium.

The outcome of the game was largely dictated by the outcome of two penalties, with former Derry man Aaron McEneff putting Rovers ahead from the spot, and almost immediately Derry were given a chance to equalise with a penalty of their own, but David Parkhouse's effort was pushed away by Rovers keeper Alan Mannus.

Aaron Greene made the points safe for Rovers with a second goal late on, outpacing the City defence before finishing with a lofted shot past City keeper Peter Cherrie.

The eye catching result of the weekend was undoubtedly at Dalymount Park, where the spectators were treated to eleven goals, three penalties and two hat tricks as Bohemians thrashed bottom of the table UCD 10-1.

Andre Wright scored four, and Danny Mandroiu bagged a hat trick in an amazing game with an outcome few could have predicted given that Bohs were only 2-0 up at half time through goals from Wright and Conor Levingston.

Danny Grant scored just after half time, Mandroiu made it 4-0 from a free kick and then Wright completed his hat trick with a penalty just after the hour.

But Bohs didn't let up and after substitute Ross Tierney made it 7-0 and Mandroiu buried two penalties in quick succession, Wright took the tally to double figures in the 86th minute.

To UCD’s credit they kept going and Jason McLelland scored a consolation strike just before the final whistle.

For the second week in succession, St Patrick's Athletic staged a second half comeback, with a 2-1 win over Sligo Rovers replicating a win by the same score against Bray Wanderers in the FAI Cup seven days earlier.

Sligo had taken a 22nd minute lead when Kris Twardek set up  Jamaican international Romeo Parkes for his eighth league goal of the season, but Pats levelled six minutes into the second half with a fine solo goal from Glen McAuley, who showed neat control and footwork before burying a shot past Sligo keeper Ed McGinty.

Seven minutes from time David Webster won it for Pats with a header from Jamie Lennon's free kick, keeping up their hopes of securing a European place.