FULLEN GAELS’ ability to find the back of the net proved the decisive factor as they prevailed in a thrilling Lancashire Senior Men’s Hurling Championship decider against Wolfe Tones of Liverpool on Sunday at Old Bedians in Didsbury, Manchester.

The Gaels raised the green flag four times on their way to a five-point victory to reclaim the Lancashire crown they won in 2014 with two of those majors coming in a frantic last two minutes that saw Wolfe Tones also find the net to set up a grandstand finish.

Tommy McNamara toe-poked home as the game entered injury-time to give the Manchester men a five-point lead but Michael McCarthy’s rasping low drive from a free reduced the Liverpool side’s deficit to just two points.

However, the impressive James Fitzmaurice picked up possession wide on the left from the ensuing puck-out and danced his way through the Wolfe Tones defence before firing low across Stephen Hennessy to secure the win for Stan Murray-Hession’s side.

Fitzmaurice had already goaled early in the second period and it was a score that restored the Gaels’ lead following three unanswered points that drew Wolfe Tones level after they trailed 1-8 to 0-8 at the break.

Brendan Coady rounded his man to fire past Hennessy midway through a first-half that saw some superb long range scoring from both sides despite a tricky swirling breeze. 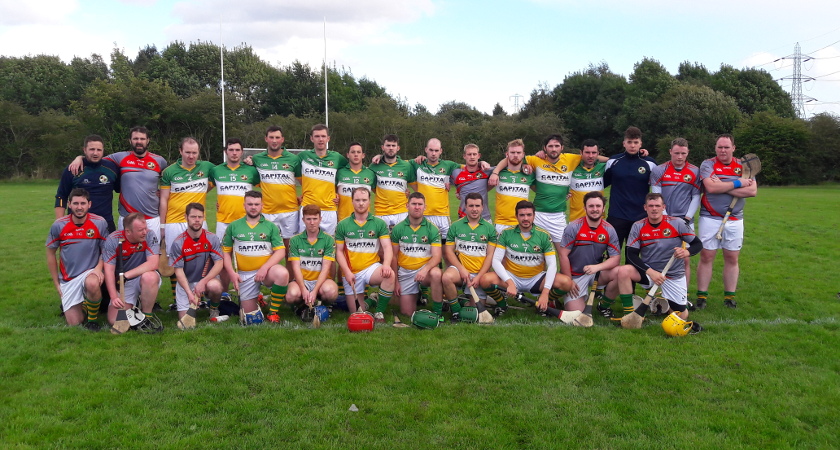 Wolfe Tones gave as good as they got in a tight first-half with Jonathan Reidy, Michael Dee, Aidan Slattery, Colm McEoin and Brendan Lynch all registering while the deadly McCarthy notched up three points – two from placed balls – before referee George O’Rourke blew for half-time.

Slattery and Lynch were on the mark soon after the break as Richie Barry’s men threatened to turn the game on its head while Shane Sexton knocked over the first of four second-half points to level things on the scoreboard.

However, that momentum was halted soon after by the first Fitzmaurice goal and despite Ryan O’Neill also pointing for Wolfe Tones, Maskey, Campion and O’Brien found the target again before the dramatic finale.

“That was an absolutely savage game and Wolfe Tones really put it up to us,” said a relieved Fullen Gaels manager Murray-Hession afterwards.

“It was a serious match and there was some absolutely fantastic hurling out there.

“Darragh O’Brien and Daire Maskey did serious work but all-in-all I can’t find fault with any of the lads.”

Man of the Match: Daire Maskey - Landed some crucial scores from distance and dominated the midfield tussle