A SAM SIMMONDS record-breaking hat-trick spoiled London Irish’s homecoming to the capital, as Exeter downed the Exiles 31-12 at the Brentford Community Stadium this evening.

Scores for Irish from Ben Donnell and Ben Loader were cancelled out by the future Lion’s trio, and tries from his younger brother Joe Simmonds and Tom O’Flaherty.

Declan Kidney, London Irish’s Director of Rugby, said at full time: “We just made some errors in that second half and Exeter took advantage, but it was great to have fans back in and I’m just sorry we didn’t give them more to cheer about.”

Aside from a brief one-off in early December, London Irish fans hadn’t been able to see their side play at home in London since May 2000.

Although important, the Christmas outing against Sale felt like more of a soft launch, whereas the welcoming of champions Exeter Chiefs was a fitting spectacle for the opening night proper.

London Irish legend Topsy Ojo expressed his excitement for the game pre-match, stating:  “It’s huge to be back in London and here in Brentford I feel like this is somewhere the club can really grow.”

This feeling was expressed by the fans also.

Season ticket holder Steve Kirwin said “I’ve been like a cat on a tin roof all da.

“I’ve followed these boys to Bath, Gloucester, Jersey, even Paris but I’ve been looking forward to watching them play here for a long time.” 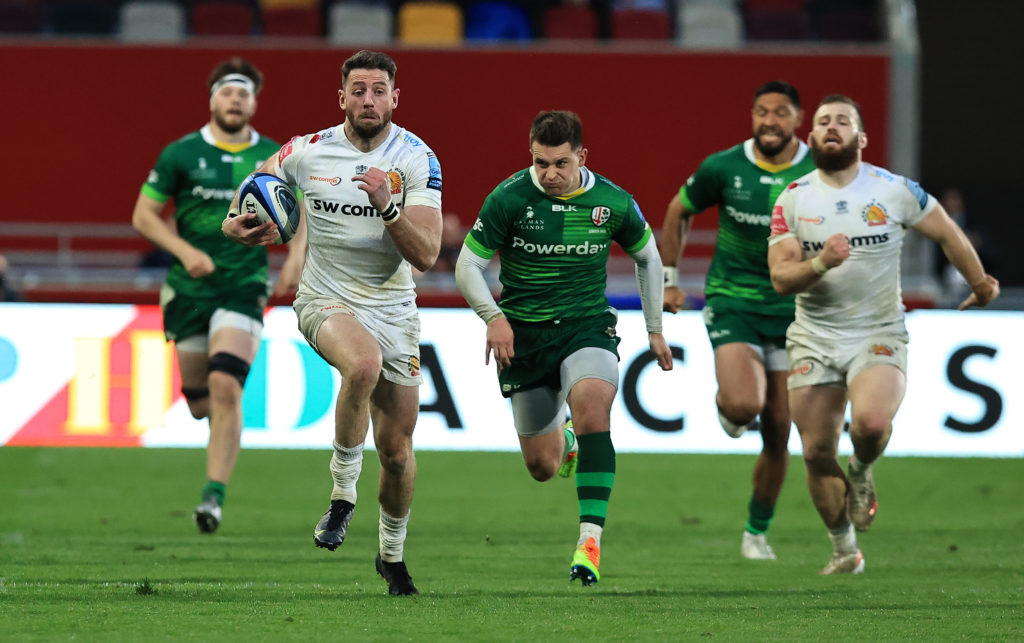 As the teams ran out, the noise created by the crowd seemed fitting for 40,000 rather than just under 4,000, but sadly for the home side it was the visitors who struck first.

After just six minutes, an Exeter kick to the corner and a powerful rolling maul, saw the Chiefs within meters of the Irish line.

As always, they remained faithful to their pick and go game and after consulting the TMO, Sam Simmonds eventually bundled over to draw level with Dominic Chapman and Christian Wade’s record of 17 tries within a single Premiership season.

The Exiles answered straight back, however, forcing repeated penalties from their guests to gain field position before giving Exeter a taste of their own pick and go medicine. 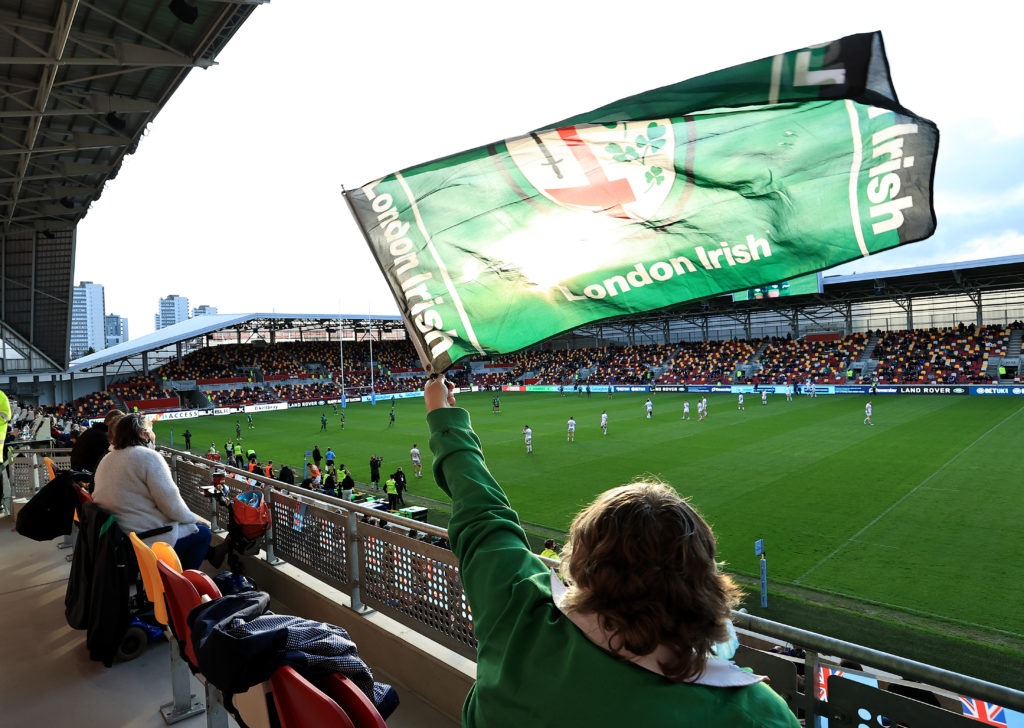 Ben Donnell’s initial placement of the ball on the line was missed by referee Christophe Ridley and although he let the phases play on, thankfully for the Irish faithful the TMO intervened, and the try was rightly awarded.

Just as London Irish appeared to be getting the upper hand, Joe Simmonds stepped in to ensure he was not overshadowed by his brother.

The young captain spotted Lovejoy Chawatama in the defensive line and sold the prop a perfect dummy before scampering over in the corner.

The Chiefs continued to press and five minutes later history was made.

Again, from just five metres out, Exeter unleashed their almost unstoppable weapon and despite his speed and small stature for a number eight, Sam Simmonds crashed over to break the record he had equalled just fifteen minutes earlier.

As the first half entered its final quarter, Paddy Jackson turned on the sparkle.

The winger managed to get his hands free and offload to Loader, allowing the 22-year-old to dot down in the corner and reduce the gap to 19-12 at the break.

An error-stricken start to the second half saw neither side threaten the other’s try line for most of the opening ten minutes. 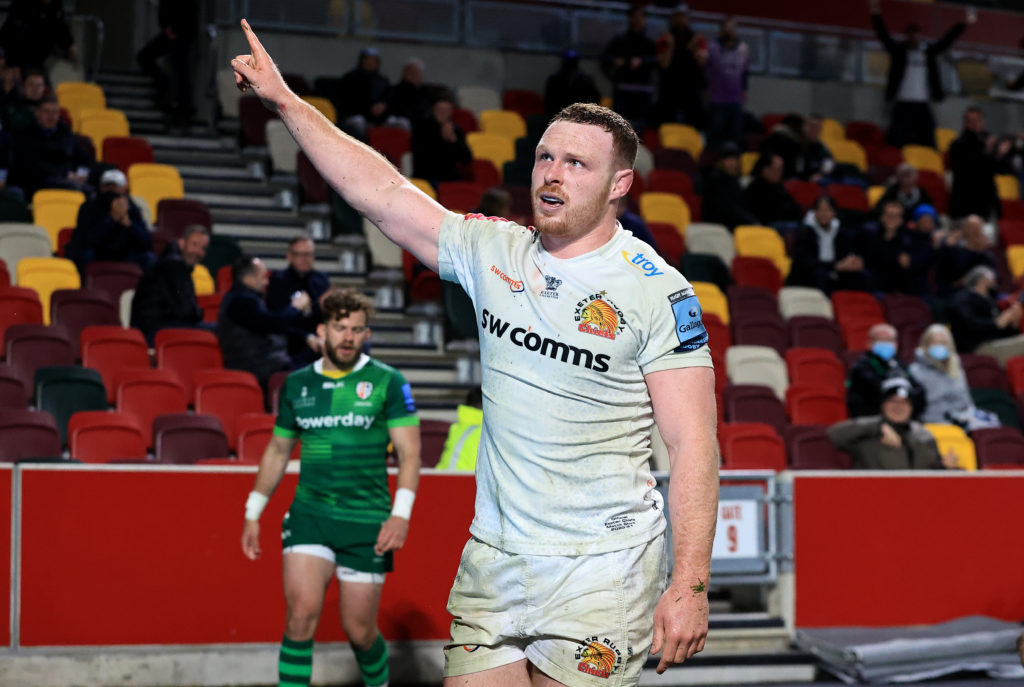 However, the biggest error was committed by Loader.

Joe Simmonds’s kick in behind the winger appeared to be perfectly weighted to stop just short of the try line, but Loader waited in the hope the ball would roll over.

This moment’s hesitation was all O’Flaherty needed, as the Exeter flyer dotted down right under Loader’s nose.

Although the Exiles continued to play well for the rest of the half, they struggled to find the final crucial pass and were not getting the rub of the green from the officials.

Shortly after his try, O’Flaherty was fortunate to only be sin binned for a dangerous challenge in the air on Tom Parton, while Jack Cuthbert may have also deserved a yellow card for his high tackle on the fullback.

As the clock ticked into the final ten minutes, Sam Simmonds made his history-making night even more memorable.

A simple overlap was well executed by his teammates and they gave him the small amount of space he needed as he dived over in the corner to complete his hattrick.

O’Flaherty should have had his second in the dying moments of the encounter, had it not been for him knocking it forward as he went to ground the ball.

Although London Irish tried to go 100m to earn a late consolation score, the visitors were deserving of their 31-12 win.