Here's how Ireland should lineup against Serbia

IRELAND WILL take on Serbia in a World Cup qualifying match later this month, in what should be a fierce encounter.

As it stands, Ireland are the underdogs in the first game of our World Cup qualifying campaign, but we still do have reason to be excited.

Our squad was released during the week and while it is undeniably quite inexperienced, there are some really talented players that could get the job done, some of whom compliment Kenny's style of play perfectly.

Here's how we'd lineup if we were in Stephen Kenny's shoes, with our rationale below. 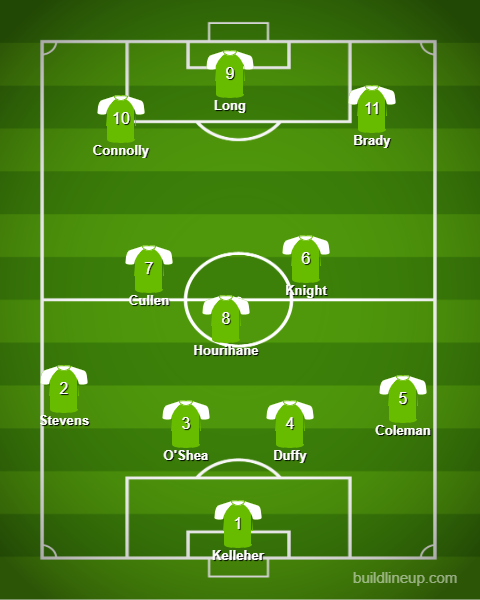 Kelleher starting in goal is possibly one of the toughest calls to make. He impressed when called upon for Liverpool this season, and will be learning loads in training facing shots against the likes of Mo Salah every week, but he is still extremely young.

However, with Darren Randolph injured, Kelleher is the safest option available, though Kenny may be tempted to give the even-less experienced Gavin Bazunu a call, as he has been impressing on loan from Man City at Rochdale.

After that, the back four kind of picks itself. Matt Doherty would have been the first name on the team sheet last season, but he has spent half of this season on the bench, and not impressing when he's played for Spurs, while Coleman has been immense. The back four itself is quite strong, so we shouldn't be leaking too many goals.

The midfield trio is dynamic, and full of energy, vision and composure. Conor Hourihane is the perfect example of a loan serving its purpose. Since going down to Swansea, he has been an absolute star, and is a guaranteed starter against Serbia next month.

Cullen and Knight may be two slightly more surprising names on the team sheet, but provide the perfect match for each other. Cullen has impressed playing for Vincent Kompany's Anderlecht side, while Wayne Rooney sings Jason Knight's praises week in week out. This midfield will get around the pitch well, while also creating chances when given the ball in forward positions. We can also expect some crunching tackles from this duo, which will be a joy to witness.

Aaron Connolly should be a guaranteed starter, purely off his pace and energy alone. While his finishing may leave a bit to be desired, he can make something happen out of nothing with his acceleration, which can't be said for a lot of the others.

After that, we've gone for Robbie Brady and Shane Long, somewhat controversially.

While neither have performed at their best over the past year or so, we could do with some experience leading the line. Brady's crossing is still as good as it ever was, and Long can always do some damage in the air.

Had Adam Idah been declared fit we'd have thrown him up top, because that sort of hold up play is exactly what we need, but Long might be able to roll back the years if we can play to his strengths.

It leaves players like McClean, Horgan and Parrott to come off the bench, with Parrott being particularly unlucky to miss out.

Jeff Hendrick and Jayson Molumby are two other midfield options, and may slot in if Kenny is looking for something different from his side.