How the Irish teams fared in the Europa League this week

CORK CITY and St Patrick's Athletic both progressed into the Europa League Second Qualifying Round after aggregate wins this week, but for Shamrock Rovers the European journey ended despite a creditable second leg performance.

Cork City's first ever European tie against Northern Irish opposition ended successfully, with a 1-1 draw in Turners Cross earning them a 2-1 aggregate win over Linfield.

The Leesiders came into the game with the advantage of a 1-0 lead from the first leg at Windsor Park, and they doubled their advantage five minutes into the second half with a Sean Maguire penalty kick.

Maguire, who scored from the spot to give his side the first leg lead, had driven his penalty straight down the middle a week ago, but this time he beat Northern Ireland international Roy Carroll with a shot to his left that the keeper got a hand to, but couldn't stop.

However, Linfield hit back four minutes later when Mark Stafford headed home at the back post from former City man Ross Gaynor's free kick, to pull his side level on the night.

Although Cork dominated the remainder of second half, they were up against an in-form keeper in Carroll, who produced fine saves to deny Maguire, O'Sullivan and Morrissey, and City had to survive a late rally from the visitors in the knowledge that a goal for Linfield would see them progress on away goals.

But the only real chance fell to Jamie Mulgrew, who fired over from a Paul Smyth cut back, and City almost scored a second in stoppage time when Mark O'Sullivan failed to connect with a Sean Maguire pass from a counter attack.

City will now play BK Hacken of Sweden away in the Second Round first leg next week.

Meanwhile, Darren Dennehy's first goal for St Patrick's Athletic turned out to be an important one, as the central defender's crucial header ensured a place in the next round of the Europa League for Liam Buckley's men.

Leading 1-0 from the first leg in Richmond Park against Jeunesse Esch from Luxembourg, Saints lost 2-1 on a sunny evening in Esch-sur-Alzette, but progressed through on away goals thanks to Dennehy's second half header.

Although Saints began well, Jeunesse Esch drew level on aggregate in the tie midway through the first half, through a Patrick Stumpf shot in the 23rd minute. 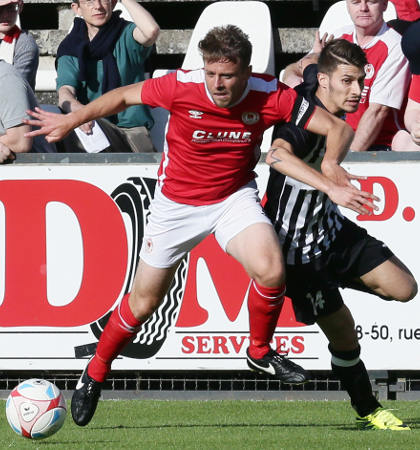 Ger O'Brien of St Pat's [©INPHO/Fernand Konnen]
But with 17 minutes remaining Darren Dennehy struck a decisive blow with a goal that put Saints ahead on aggregate.

After seeing an effort pushed wide by Jeunesse goalkeeper Marc Oberweis, when the resulting corner came in Dennehy rose to send in a header that squeezed in at the far post and sparked wild celebrations among the travelling supporters.

An exciting finale ensued when Stumpf grabbed his second of the evening to put Jeunesse Esch 2-1 ahead with three minutes left, but Saints' defence held firm and they could even have added to their tally in stoppage time when David Cawley was denied a goalscoring opportunity by Jeunesse defender Portier, who was shown a second yellow card for his actions.

Saints will now face Dinamo Minsk of Belarus in the Second Round, with the first leg away from home next week.

However, the European dream is over for Shamrock Rovers, and despite a decent 1-1 draw in Finland against RoPS, they went out of the competition on a 3-1 aggregate score.

The damage was done in the first leg last week when the Finns left Tallaght Stadium with a 2-0 lead, a result that was followed by the departure of Hoops manager Pat Fenlon.

But under the leadership of caretaker boss Stephen Bradley, Rovers gave their travelling fans a boost when they took the lead in the 22nd minute of the second leg in Rovaniemi, just ten miles from the Arctic Circle.

Dean Clarke was fouled inside the box by defender Juha Pirinen and captain Gary McCabe made no mistake with a confident finish from the resulting penalty to give Rovers some hope.

But within four minutes the home side were level, when Muinonen took advantage of an error by Craig Hyland to re-establish his side's two goal lead in the tie.

Rovers enjoyed their share of possession in the second half, and Gavin Brennan and Gary Shaw both had efforts that missed the target, but in the end the home side held out to secure a place in the next round.

Four of the latest talking points from the League of Ireland