One hell of a ride: Ireland’s heroes can hold their heads high after Euro 2016 exit

THE Kings of Lyon struck all the right notes. They played with rhythm and style, passion and panache, all the while knowing this stage belonged to them.

Ireland may have been on the same bill but only because every A-Lister needs a support-act.

The script told us that France would win and Ireland would not, that France – with its population of 60 million people, its eclectic mix of talent, its packed out stadium, with flag-waving, passionate fans – would achieve what everyone wants a host nation to. Everyone, that is, except the Irish, who came to Lyon with their own agenda.

They may have lacked the guile of their hosts, may have lacked the big-name players, yet they had something else; a bunch of unlikely heroes. The goalkeeper who overlooks the fact he is overlooked at West Ham, the right back – and stand-in captain – who was briefly released by Sligo Rovers, the centre-half who was nearly killed in a game, the other centre half who spent a year in Iceland learning his trade, the left back who was once a centre forward.

Right across the team, similar stories get told. All of this Irish squad have known hardship at some stage. Yet all of them had decided – through a mixture of determination and pride – they weren’t going to allow one manager’s view put them off. So they fought their way back to the top and never stopped believing.

And if there is one reason why this team has reconnected with an Irish public over the course of the last two weeks, it is this. Against Sweden they delivered a performance but not a victory, against Belgium they produced neither, and then against Italy, on a night that will live in the hearts and minds, they gave us the night of our lives.

Seven minutes from time, we caught a glimpse of Shane Long, staring at the stadium clock, positioned high above the goal where Robbie Brady would later score into. Seven minutes stood between them and failure. And yet when panic should have set in, they instead drew inspiration from the crowd and found the energy to go again.

“It just seemed like we’d do it,” Long would later say. Still, no one thought that when Wes Hoolahan missed a sitter. Who’d have believed then that Hoolahan would create the winning goal a minute later, that the thousands in Lille and the millions at home would jump up and cheer and then later, when they’d see Brady embrace his brother behind the goal, wipe a tear from their eye? 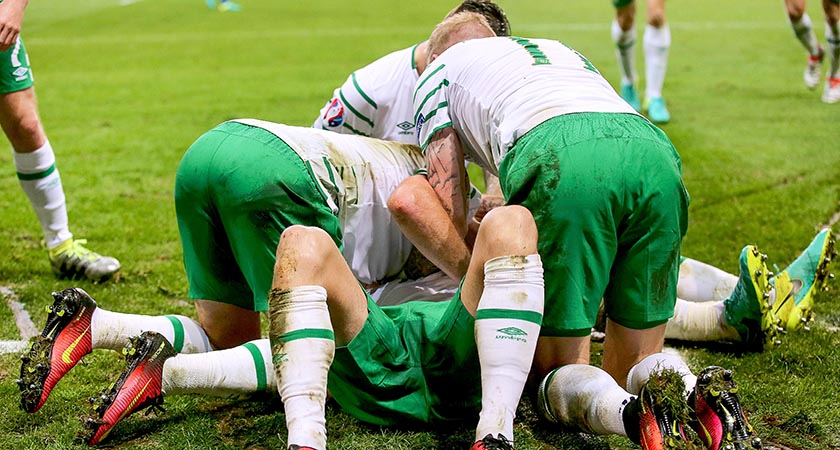 Brady celebrates scoring his side's goal against Italy with teammates [©INPHO/Donall Farmer]
No one thought it because no one – Martin O’Neill aside – really believed in this team. They’d grown used to seeing them fail. They’d seen how their careers had panned out and, while there was admiration for their character, there was also an acknowledgement that the Italian team they were playing against was packed with Champions League players, whereas the Irish side were not.

In Bordeaux, against Belgium, they’d flopped. But in Lille, they’d come back to life. And in Lyon, they kept that spirit going, Brady scoring again, Randolph excelling again, Jeff Hendrick coming of age – and for close to an hour on a sunny, Sunday afternoon, we dared to dream.

Yet we shouldn’t have.

Lyon wasn’t like Lille. From the moment we arrived in the Auvergne-Rhone Alpes city, the dearth of Irish fans – in comparison to the numbers who had temporarily invaded Lille – was apparent. Tickets were an issue.

Their French hosts had grabbed the majority of them, a sign of how they want to win this tournament desperately. Another sense of this desperation was visible, 90 minutes before kick-off, when the French team bus made its way through the tunnel that runs underneath the Stade de Lyon. As it approached the entrance, crowds of Frenchmen surged to greet it, loudly cheering open Allez les Bleus, making their voices heard, their intentions known.

And we’d see it again inside the stadium. Thousands of French tricolours were handed out free to the home supporters and when they waved in unison just minutes before kick-off, you just knew that this wasn’t going to be like the Wednesday before, when a boisterous Irish support roared their team to glory.

This time they were outnumbered 10 to one, making it plainly clear that if Ireland were to do anything in this game, they’d have to start well. Which they did. Brady – again – was the hero, getting a goal which brought to mind Danny Blanchflower’s old saying about ‘the need to score first to equalise’ in matches where David faces Goliath.

From that moment on, though, the siege of Lyon took shape. Randolph would save free kicks from Dimitri Payet and Paul Pogba; a shot from Blaise Matuidi; Stephen Ward would make a great block on Payet; Shane Duffy on Antoine Griezmann. 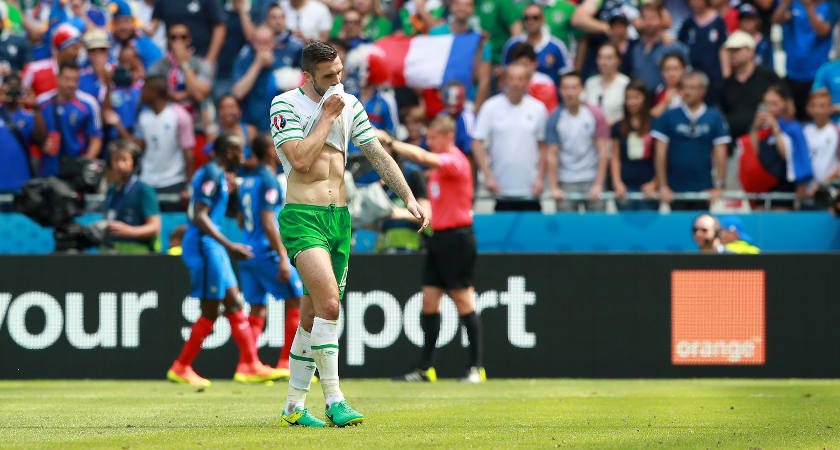 Shane Duffy trudges off the pitch after being sent off [©INPHO/James Crombie]
Nine minutes were played when a reality dawned. Daryl Murphy, the Irish centre forward, was – unsurprisingly – the one positioned highest from Randolph’s goal. The trouble was he was only 30 yards from it. And this was after nine minutes.

Still, Ireland got smart. Brady bought a free which bought a minute’s respite; Hendrick and Long bought even more time by calling for attention rather than soldier through injuries; Murphy would come close with a volley, Duffy even closer with a header.

“The quick turnaround from Wednesday’s game was a factor,” O’Neill said. “France were fresher.”

And if truth be told, they were better too, even if they were guilty of panicking before Griezmann’s header settled in the back of Randolph’s goal. Once level, they were a different team.

From here on in, Ireland’s play would get increasingly ragged, Duffy would get sent off, Griezmann would score again, an exhausted Ireland ran on empty for the last half hour.

Yet even as they did so, something special was achieved. Down a goal and down a man, they struggled desperately to win the ball back and in their efforts to do so, there was something so deeply admirably about the fact they never stopped trying.

And there was something even more admirable about what happened afterwards, when the final whistle blew, when Hendrick dropped to his knees, when Randolph sunk to the floor, and when the rivals for their position, Glenn Whelan, Shay Given and Kieren Westwood raced over to console them. “Seeing Keiren and Shay there when I was able to look up again was such a nice moment,” Randolph said.

Other nice moments followed. Given threw his gloves into the crowd; Hoolahan his boots. The French team left the pitch but the Irish stayed on, sharing those final moments with the crowd, all the while knowing they may never get to experience anything like this again. “That was just it,” Randolph said. “It may be a once in a lifetime thing.”

Yet if it is, it has been one hell of a ride. “There are moments like that at the end, standing in front of the fans, hearing them sing, that you'll never forget,” Brady said. “Sadly, though, it had to come to an end.”