KERRY turned on the gas in the second-half to ruthlessly crush the best efforts of the Red Roses of Lancashire and set up an All-Ireland final against Mayo next month.

A valiant effort from the hosts in the first-half where they went in level at the break, signalled a potential victory; but within the first five minutes of the second-half the writing was on the wall for the British champions.

Kerry’s fitness and match sharpness was evident for all to see as they overran the Saffrons to pummel three goals in the space of eight minutes to coast home in the end.

Old Bedians was looking splendid in the warm summer sunshine and a piper led the two groups of players past the well-marshalled Manchester ground as 400 spectators waited in expectancy for the game to begin.

Michael Higgins opened the scoring for Lancashire when he split the posts with the outside of the boot after three minutes, but Kerry notched over the next three points courtesy of their potent full-forward line of Sean O’Conchuior, Kieran Hurley and Niall O’Shea.

The trio would amass a total of 2-12 between them and were the main difference between the teams. 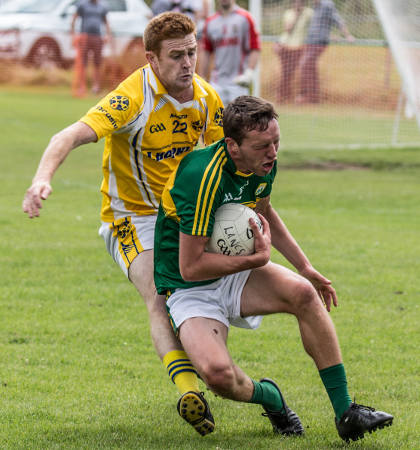 Then a Kerryman struck a goal, but this time he was wearing a Lancashire jersey. Darren Russell, who hails from Asdee, managed to pounce on the ball when it struck the upright, to give the Saffrons the lead.

This was followed up with a point from the marauding Pauric McGuirk as Lancashire’s tails were very much up. Kerry were welcoming Lancashire onto them and were simply absorbing the pressure, but when they broke, they did so at speed and precision.

Enter Hurley. He was giving McTaggert a torrid time and his next two points were simply breathtaking as he got out in front of the Louth man, turned and fired over.

Colm Conway for Lancashire and then an O’Shea free-kick followed up Hurley’s heroics to leave Kerry one point behind before Tyrone’s Ciaran Harper stretched the lead back to two points with a free.

Kerry would then outscore Lancashire by three points to one for the remainder of the half, the pick of these being an O’Conchuir effort which ricocheted off the crossbar, leaving the score Lancashire 1-6 to Kerry’s 0-9 at the break.

This was an encouraging half from the British champions, they were going toe-to-toe with their more illustrious opponents and they had a chance of an upset as the second-half began.

In comparison, Kerry manager Stephen Wallace was not happy. He cut a frustrated figure along the sideline for much of the opening half and his rage was taken out on an unlucky trio of players as they were made to leave the fray at the break.

The substitutions seemed to do the trick, as the players who came on impressed, as well as sending a firecracker up the backsides of the rest of the team.

Within the space of five minutes they had registered 1-3. The Kingdom had come. The deadly O’Conchuir hit the first two points, the first being a monster effort from long range, while the second was a free-kick from close range.

This was followed up by the rampaging John O’Connor, before Kevin O’Sullivan smashed the ball into the net to stretch the gap to six points.

Lancashire had barley time to breathe such was the speed of the Kerry attacks. Ironically, Lancashire’s first attack of the second-half resulted in a goal when a great run by Stephen Sands led to Gerard McCaughey rifling the ball past Darragh O’Se in the Kerry goal.

While the partisan crowd thought that Lancashire were back in the game, their dreams were blown away in ruthless fashion; the Kerry fashion. They hit three goals in succession to seal the game.

First, Hurley found the net to cap an excellent move; secondly, O’Shea goaled a rebound after the ball hit the post and then wingback Robert Wharton got on the end of a flowing move to fire home.

By this stage the score read Lancashire 2-6 to 4-12 and it was all over with 12 minutes remaining.

A catalyst for these goals was the impressive Adrian Spillane in midfield. He is not overly big for a midfielder, but his sheer athleticism was a joy to watch as he soared through the sky like a falcon to secure possession.
Kerry rattled over five points to finish up, not before a second goal for McCaughey gave Lancashire some credit to leave the final score Lancashire 3-10 to Kerry’s 4-17.

The Kerry Juniors were much like their Senior counterparts in the second-half. Their quick speed of thought and delightful foot-passing could not be thwarted by a tired Lancashire team.

Kerry had to start a new team from scratch this year. They won the All-Ireland Junior last year and the same players cannot take part if they have had previously won it, add to the fact that 10 of the players are just 20 years of age; it is a remarkable achievement.

Lancashire, on the other hand, were in bonus territory. They had deservedly claimed the All-Britain crown and anything after that was a welcome addition. They can look back on a successful season as the inter-county football in Britain takes a break.

Man of the Match: Adrian Spillane (Kerry)
Anyone in the Kerry full-forward line could have secured this award, such was their possession-holding and score-taking capabilities. The award however goes to Adrian Spillane. Spillane is truly an athlete. He ran from start to finish and linked up play as Kerry became more dominant in the second-half and was very much like Donnchadh Walsh.

I'm gutted in a way because I hate losing, but I'm proud of what the lads achieved this year and in the first half we were the better team. I don't think the score reflects the game but they turned on the style in second-half. I've loved every minute of it this year, but now I can finally start to get some sleep again!

If we are lucky enough to win an All-Ireland, then Lancashire played a huge part in it. Lancashire put us under the cosh here today; they worked hard, they tackled hard and played some damn good football. They gave our guys a serious wake-up call that will stand to us. The football in Britain does not get the credit it deserves but I think anyone here today will see this as differently.