Kilkenny v Galway: Can the Tribesmen break the mould?

IN ONE of his recent football columns, Jim McGuinness made a comparison between the Mayo footballers and the Galway hurlers.

Both of their identities have been framed through their history but McGuinness made the comparison for two reasons; to highlight their mental strength, and to underline the importance of that mental fortitude when taking on the machine.

“In both squads there seems to be a collective power, a single-mindedness, a conviction and a serious intent,” wrote McGuinness.

“These for me are the attributes of elite winning teams. It’s a tribute to both sets of management teams for building squads to such a high level of mental readiness. The problems though arise for both Galway and Mayo in the teams they meet next, Kilkenny and Dublin. Can they do it; liberate their counties from this cycle of hurt?”

After Saturday's All-Ireland Senior Football semi-final replay defeat to Dublin, Mayo are still trying to break that cycle. Galway, meanwhile, are also trying to liberate their county ahead of Sunday's All-Ireland Hurling final meeting with the Cats. Their famine doesn’t extend as long as Mayo’s, but Galway’s longing has been just as excruciating given the immense talent the county has produced in the last three decades.

Galway also have to take down a Kilkenny team – a machine – that doesn’t know anything other than winning All-Irelands. They played without fear in the semi-final against Tipperary – especially the younger players – but will they be able to do the same against Kilkenny?

Galway have also had to deal with the occasion and the build up to an All-Ireland final, something completely different to anything those young players will have faced before.

Yet half of the starting team featured in the drawn and replayed All-Ireland finals of 2012, which will stand to Anthony Cunningham and his squad now. What’s more, Galway have played Kilkenny more often (six times) than any other team in the last four seasons.

Their most recent meeting – the Leinster final – is the most important, not just because it’s the freshest, but because Galway clearly learned so much from that defeat.

For a start, they set up far too orthodox that day. Their full-forward line was too rigid. There was little or no movement inside. Once Kilkenny locked down the centre of their defence in the second half, they sucked Galway into that vortex and strangled the life out of them inside in it.

What has changed for Galway in the meantime is their attacking formation and structure. They have found a greater balance, a more fluent rhythm of movement and attacking interplay.

Cathal Mannion is the greatest embodiment of that new freedom. In the Leinster final, Mannion had just a handful of possessions. He only scored one point. In the last two matches, Mannion has scored 12 points from a combined 29 plays. He also had four scoring assists.

Doing it against Kilkenny in an All-Ireland final is far more demanding than producing it against Cork and Tipp but Mannion is on such a hot streak now, and is getting into far better scoring positions, that he will be far harder to tie down than he was in the Leinster final. 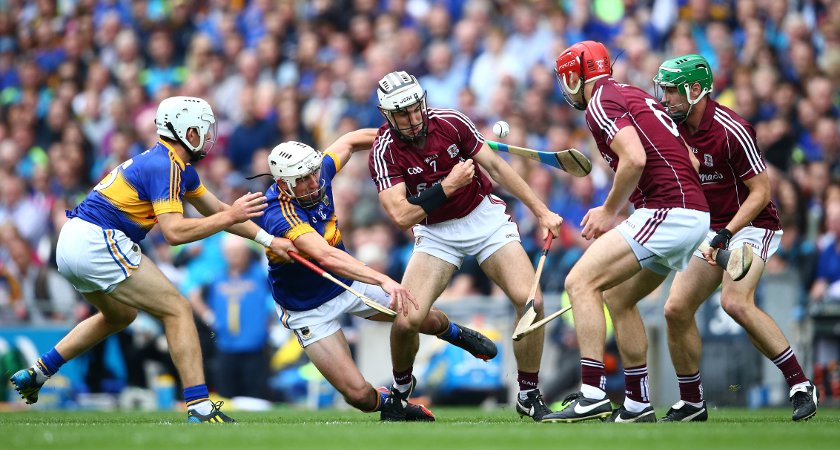 Galway beat Tipperary 0-26 to 3-16 in a thrilling semi-final [Picture: Inpho]
With Kilkenny though, the terms and conditions always stay the same. They never offer the same scope or space for attackers that other teams do. Kilkenny have a couple of defenders now that would have struggled to make their panel a few years ago but their strength has always been in the collective. They rarely leave their defenders isolated.

To win on Sunday, Galway will need players like Jason Flynn and Mannion to run Kilkenny’s defence into the ground. Yet most teams have gone out with those same intentions and Kilkenny have still kept coming up with the same answers.

What gives Galway an advantage is their physical strength and huge power, combined with their pace. Kilkenny ground Waterford down. They did the same to Galway in the Leinster final but Galway have a better balance to their team now.

David Burke is far more comfortable at midfield than at wing-forward, where he was for the Leinster final. Against Tipp, Burke was the most dominant player in the middle third, making 22 plays and having four scoring assists.

Flynn, who didn’t start the Leinster final, has since found his groove, scoring seven points from play and having five scoring assists.

The concern for Galway though – and where Kilkenny will target – is their defence. The last 20 minutes of the Leinster final was shooting practise. Tipp’s Seamus Callanan scored 3-4 from play off Paraic Mannion at full-back so that is the first place Kilkenny will target.

Mannion man-marked TJ Reid in the Leinster final but Reid still ended the match with 1-3 from play, set up three more scores and was fouled for a converted free. Yet this time around, Galway will surely try Daithi Burke as a man-marker on Reid.

Burke did an excellent job on Patrick ‘Bonner’ Maher against Tipp, while he held Richie Hogan in the Leinster final. Yet he looks ideally suited to Reid now because Burke is also comfortable playing at full-back.

Stopping Hogan and Reid is absolutely central to stopping Kilkenny but they also have Colin Fennelly, Eoin Larkin and Ger Aylward to worry about. Aylward has been brilliant to date, probably the most underrated player this summer.

Since scoring three goals against Wexford, Aylward has scored seven points from play and has a direct hand in engineering 1-6. His work-rate though has also been exemplary; against Waterford, he made more hooks/blocks/tackles than anybody else.

That is the manic work-rate Galway will have to match first. If they can, and if their defence holds up, they have the shooters to upset the odds, and finally break that cycle and liberate their county.