Lee Grace of Shamrock Rovers celebrates after scoring his side's second goal of the game during the Extra.ie FAI Cup Quarter-Final match between Galway United and Shamrock Rovers at Eamonn Deacy Park in Galway. (Photo By Eóin Noonan/Sportsfile via Getty Images)

SHAMROCK ROVERS needed a last minute goal to book their place in the Extra.ie FAI Cup semi-final with a 2-1 win at Galway United.

Having accounted for Cork City in the last round, Galway United looked like they might be on target to spring another upset when they took the lead after 33 minutes.

A Stephen Christopher shot was blocked in a crowded penalty area, and Maurice Nugent pounced on the loose ball to put the Tribesmen ahead.

Rovers levelled 11 minutes into the second half when Graham Burke's cut back was despatched into the net by Aaron Greene, and with extra time beckoning Greene was also involved in the winning goal that arrived in the third minute of stoppage time. 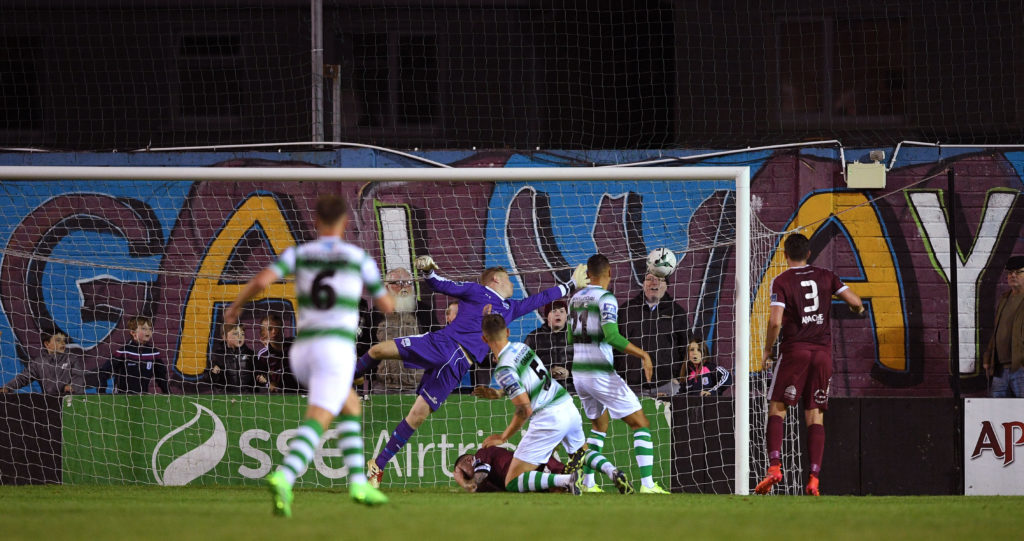 Galway goalkeeper Kevin Horgan initially made a fantastic save from a Greene shot, but when the ball was crossed back into the box Lee Grace rose to head home at the back post.

The other FAI Cup tie of the weekend was a far more one-sided affair, with Sligo Rovers cruising to a 4-0 win over struggling UCD at the Showgrounds.

An early Ronan Coughlan strike set Sligo on the way, although there was a stroke of good fortune about their second goal on 33 minutes, when David Cawley’s close range effort cannoned off the crossbar and bounced off UCD keeper Conor Kearns and into the net.

Regan Donelon added a third goal from the penalty spot 10 minutes into the second half and Liam Watson, on loan from Accrington Stanley, wrapped up the win with a fourth goal in stoppage time.

There were two games in the Premier Division, and Dundalk took one more step closer to retaining their Premier Division title with a 1-0 win over Cork City at Oriel Park.

For the third time in recent weeks, Georgie Kelly was the Lilywhites match winner, and his impact on the game was spectacular to say the least, as he scored with his first touch of the ball less than a minute after coming on as a substitute.

Michael Duffy's well struck corner kick was sent deep into the box and Kelly applied a vital touch to steer the ball home.

The result puts Dundalk ten points clear at the top of the table, and they now need three more wins from their last six games to retain their Premier Division title.

In the other Premier Division game on Friday, new St Patrick's Athletic head coach Stephen O'Donnell got off to winning start with a hard fought 2-1 win away to Finn Harps. The Saints had to come from behind to clinch the points after Nathan Boyle had put Harps ahead in the 31st minute.

But Darragh Markey brought Saints back on level terms on 56 minutes, and half time substitute  Rhys McCabe sealed the points with an opportunist goal 11 minutes later, pinching the ball from Harps' Gareth Harkin before coolly finishing into the bottom right corner.

Waterford and Bohemians were both in action against Scottish opponents in the Tunnocks Caramel Wafer Challenge Cup, and Waterford progressed through to the next round thanks to a 3-1 win over Heart of Midlothian Colts at the RSC.

A 27th minute header from Karolis Chvedukas gave the Blues a lead that they held until 17 minutes from time when Leon Watson levelled for the Hearts youngsters.

But with ten minutes left Cory Galvin set up Alex Phelan to put the Blues back in front, and six minutes from time victory was secured when Regix Madika powered through to bury home a third goal.

However, Bohemians made the trip across to Lanarkshire and a late winner from Airdrieonians substitute Callum Smith ended their interest in the competition for this season with a 3-2 defeat.

In an entertaining end-to-end game at the Penny Cars Stadium, Bohemians twice came from behind to level the tie, but were undone by a mistake from central defender Aaron Barry that proved to be decisive.

Callum Gallagher gave Airdrie an 18th minute lead, but Bohs went in level at the break thanks to an equaliser on the stroke of half time from Scott Allardice, the only Scot in their starting eleven.

With just under 20 minutes remaining, Gallagher then scored his and his side’s second of the afternoon to restore Airdrie’s lead although it lasted only four minutes before Luke Wade-Slater levelled for Bohs. But 13 minutes from time, Airdrie substitute Callum Smith pounced on a loose pass back from Aaron Barry to bag the winner for the Diamonds.