IN the seminal life of this Ulster team, Leinster have always been there.

Four times over the course of the last five years, the teams have met in either semi-finals or finals – and on each occasion, Leinster have won – humiliating Ulster in the 2012 Heineken Cup final, beating them again in the Pro12 decider a year later, as well as claiming semi-final victories in 2011 and 2014.

And here they are again, trying to end their trophy drought, with Leinster the obstacle in their way.

Yet with Ulster, you often wonder if the toughest opponent they face is from within. They have the talent and have the depth but whenever they have had the chance to come of age, they have come unstuck. “It’s a psychological thing as much as technical or tactical thing,” said Les Kiss, their director of rugby.

A year ago, after their two-point loss to Glasgow Warriors in the Pro12 semi-final, Kiss – who had been appointed director of rugby but who was unable to take up the position until after Ireland’s involvement in the World Cup ended – picked up the phone to call Rory Best. “With a few tweaks, we can become a title-winning force,” he said to the Ireland captain.

Since then, he has tried to address those issues on the training field. “Since Les came in,” Best said, “he has been putting a bit of pressure on us to get up to the standards he expects which, ultimately, are international standards.

“He’ll not accept anyone cutting any corners. He expects a certain level and if you get to that and produce on the pitch ultimately he’ll make you a better player. If everyone becomes a slightly better player then it makes us a better team. If you can get a couple of per cent more out of each player, and put that to 15 or 23 or 40 guys, that’s a lot.” 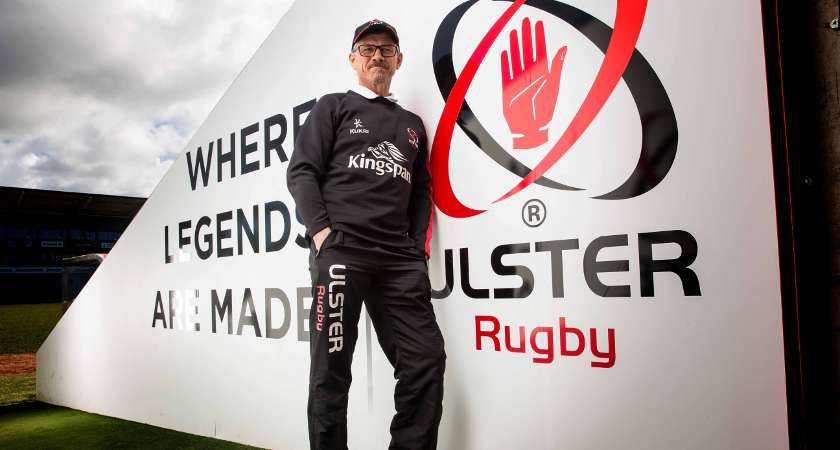 Les Kiss has made a difference at Ulster [Picture: ©INPHO/Billy Stickland
For the last month they were walking a tightrope, having lost games against Munster, Glasgow, Cardiff and the Scarlets that they should have won. With their season hanging in the balance, they – just about – sneaked into the play-offs. Yet in doing so, they recorded one huge result, a 30-6 win over, you guessed it, Leinster.

If that result highlighted everything Ulster were capable of, then it also highlighted the impact Kiss, their figurehead, has had over the course of the last seven months.

The Australian has been in Ireland for eight years now, after injury ended his glittering rugby league career. Ever since, he has undergone a “gypsy-like” life in South Africa, working with the Springboks and a number of South African teams before he worked for the Waratahs. “I don’t know where he gets the energy,” said Rocky Elsom, the former Leinster player, who worked with Kiss. “The guy’s never down.”

Ulster, however, have been. The strongest province in Irish rugby in the decade leading up to the game turning professional, they have since seen first Munster and then Leinster pass them by, claiming five European Cups between them. Ulster’s solitary success – back in 1999 – has never been built upon.

Yet there is hope it may well be now. Iain Henderson emerged last year; Stuart McCloskey this season. Within a year, they may both be Lions.

And then there is Paddy Jackson, the out half who was considered too flaky just six months ago, but who now has proven that he can win big games. “Paddy’s got the lot,” Kiss said. “He has really matured.”

Andrew Trimble, Jackson’s team mate, agrees: “Paddy is probably our most important player,” he said. "When he plays well, we generally perform too. Yes, we remember when he came in at the start of his career and when he was wet behind the ears. He was a youngster then but he's just become a leader.

"I genuinely feel with Paddy that we're very lucky to have him. He cracks the whip, he's a leader, he makes sure standards are maintained and you don't have to look further than Johnny [Sexton] to see someone who Jacky's on his way to becoming.

“Mentally, he is just so strong. He has had one or two potential setbacks along the way and if it had have been anybody else, they would not be anywhere near as resilient as Paddy. He has had to deal with things not going so well, when he was getting a hard time. But he has bounced back and become the person I was just describing. He is genuinely our most important player at Ulster.”

This Friday we will see if Trimble is right. Jackson versus Sexton is an intriguing sub-plot behind the main storyline, where victory for Leinster will set them on course for a record-breaking fifth Pro12 title, compared to Ulster, who are seeking to end their 10-year drought.

“This competition has come on a lot in terms of intensity,” Kiss said. “It is certainly not as easy as it was three to five years ago when you knew you'd have bankers.

“I have got to say it has been one of the toughest competitions the Pro12 has had in as many years, if not the toughest. The pressure is always on – right through the season.”

And never more so than at the business end of it.