'If we play well, it doesn't matter what London do,' says Mayo's James Horan

MAYO manager James Horan believes if his side play to their best then ‘it doesn't really matter what London do or don't do’.

Horan was speaking ahead of this Sunday’s hugely-anticipated Connacht Final in Castlebar.

The Mayo chief said of his side, who are the defending Connacht champions: “The team are smart. They have watched the games, they'll read the press, but they are a really smart bunch of guys that are just working on getting themselves right.

“They know if individually that we get ourselves right and play well, it doesn't really matter what London do or don't do. It's our game and our focus and that's where we are.”

In an interview with the Irish Independent, Horan also reflected on his first championship outing as Mayo boss in 2011, where his underprepared team were close to suffering defeat against London.

His side had forced extra-time with late points from Trevor Mortimer and Kevin McLoughlin, resulting in their championship campaign still being kept alive.

Prior to their first meeting since Mayo’s close-call at Ruislip, Horan was keen to point out the physicality favouring Paul Coggins' side.

"They are competitive. They are a physical team, there is no doubt about that,” he said.

"They will obviously think they rattled us over in Ruislip and they will want to build on that and the things that worked in that game. They'll certainly try and have a robust encounter with us.

"They have a very good manager who'll have lots of plans to try and undo us, but we'll just work away on our own thing." 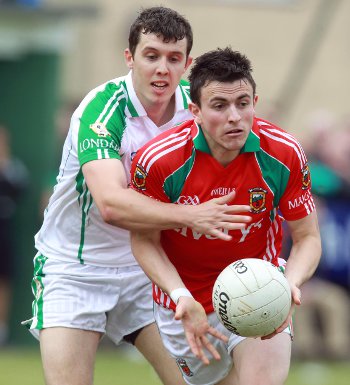 Horan, who is hoping to lead Mayo to their third consecutive Connacht title on Sunday, admits that he would have expected to see either Sligo or Leitrim in the final, but believes that London’s place is well-deserved.

“Am I surprised to be facing London? I suppose a little, yeah. When the Connacht championship draw was made, a lot of people told me it was the toughest draw we could get.

"But they are there on absolute merit. The couple of championship wins, a bit of confidence... I'm sure it is going to be a great occasion for a lot of them."

The Exiles had produced an incredible first half performance against Leitrim in their semi-final replay, but failed to maintain their significant lead and almost let it slip away.

Horan believes that London will have learned lessons from this game, and that they will be in a better physical state for the final.

"I'm sure, even since their first championship game, their strength and conditioning has improved significantly and they are doing a lot of work on it.

"It mightn't be as big a factor as people think. There is a lot to be said about passion and heart when the body gets tired. I'm sure they'll have ample juice to use.

"The approach we have taken over the last number of years is that we just make sure that we are right. For our preparation, Division 1, Division 4, whatever, it doesn't matter. It is just us preparing and doing our thing. Getting ourselves right, getting our head right, working on our skills, trying to be as sharp as we can.

"Then come the Connacht final, we play as well as we can. It really is that simple. That's the approach we always take, regardless of who we are playing."