The pair both started as Rovers secured the required 7-0 win over Scunthorpe that sealed promotion back to League One at the expense of Northampton Town.

The improbable turn of events has been described by pundits as 'unbelievable', 'unthinkable' and 'the greatest turnaround ever'.

Meanwhile, Clarke revealed a young fan told him before kick-off that Rovers would win 7-0 against the Irons.

Both Rovers and Northampton went into the final day on 77 points, with Town one place higher by virtue of their +20 goal difference, compared to Rovers' +15.

That seemed unlikely as the Cobblers raced into a 3-0 lead at Barrow after just 22 minutes. 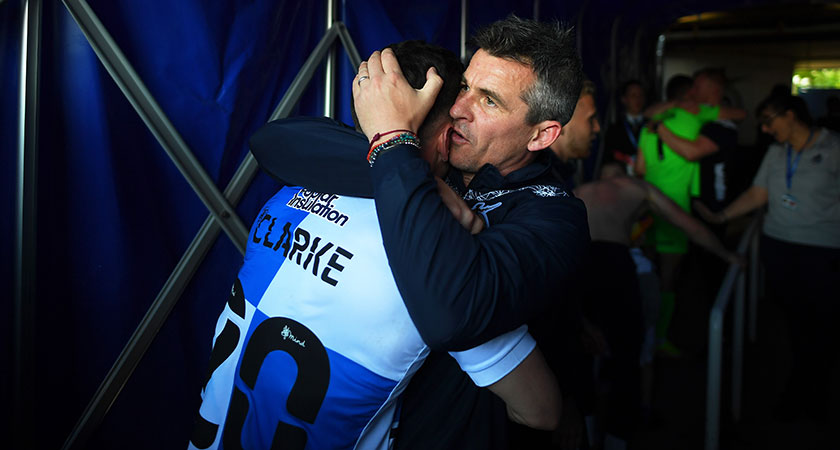 Despite conceding on 45 minutes, Northampton's 3-1 half-time lead coupled with Rovers' 2-0 lead over Scunthorpe at the break left the Pirates still needing five goals — more, if Northampton added to their lead.

However, the Cobblers failed to do so while Rovers went for broke.

After Oliver Lobley's own goal and Connor Taylor's strike in the first half, Aaron Collins made it 3-0 to Rovers on 53 minutes. 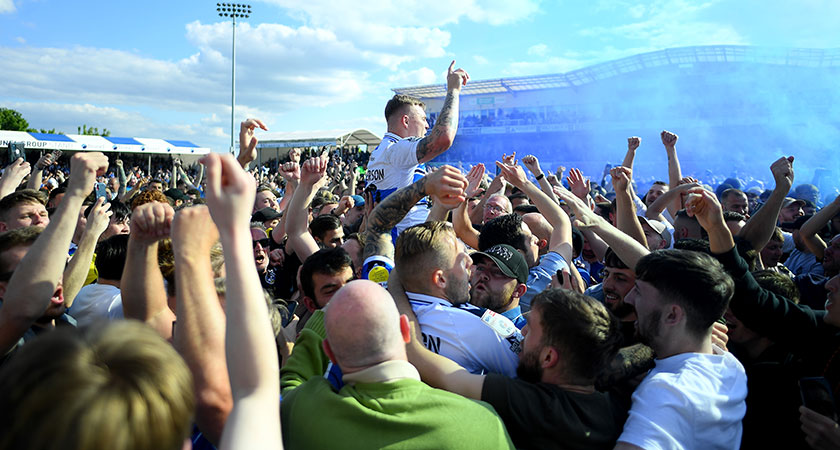 Anthony Evans then hit a brace before Collins struck again on 79 minutes to make it 6-0.

With five minutes left, Harry Anderson headed the seventh goal, sparking a pitch invasion that held up the game for 15 minutes.

However, Northampton were still playing and another goal for the Cobblers against Barrow would have left Rovers needing an eighth. 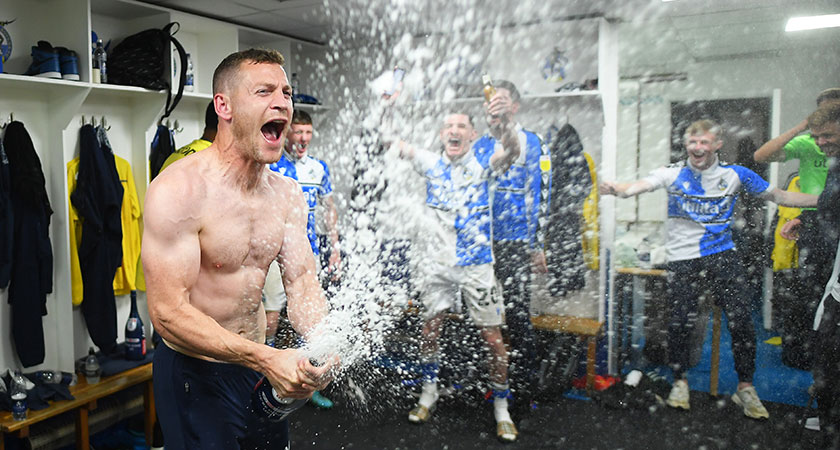 Northampton's game ultimately finished 3-1, leaving them nervously awaiting the outcome of the delayed game at the Memorial Stadium — a late goal for Scunthorpe would undo all of Rovers' hard work and hand the Cobblers promotion.

However, the Pirates saw out the final five minutes to seal a 7-0 win, finishing with a goal difference of +22 just as Northampton had, but leapfrogging them into third by virtue of having scored more goals.

It was the first time Rovers had been in third all season.

A 7-0 win over Scunthorpe sees them promoted to League One ahead of Northampton Town 🤯pic.twitter.com/sXlFtn6kd9

Back in October the Pirates were 20th, just three points above the relegation zone after 10 games.

Even in mid-February, they were 14th in the table with 18 games remaining after a 0-0 draw with Mansfield.

That result left them 10 points off the playoffs and 14 points adrift of the automatic promotion places.

Saturday's remarkable scoreline is all the more extraordinary considering the last time Rovers won a football league game 7-0 was in 1964, while they have never won a league game by more than seven goals in their 138-year history.

Both Whelan and Clarke were only in the starting XI due to the absence of regular first team players Josh Grant and Luca Hoole through injury and the suspended Paul Coutts.

The experienced Whelan — capped 91 times for Ireland — has been used primarily as a substitute of late, while Clarke was making just his fifth league start for the club.

However, both played their part yesterday, Whelan playing the full 90 minutes while defender Clarke helped his side to a clean sheet during his 71 minutes on the pitch.

He called it before that game 😂 hope he had a great day ⛽️🥳 https://t.co/z39ZLXoacX

The Dubliner revealed on social media on Sunday that the mascot who accompanied him onto the pitch the previous day had predicted the score.

"He called it before that game," tweeted Clarke.

Meanwhile, it is the fourth promotion of Whelan's career, having won promotion to the Championship with Sheffield Wednesday in 2004/05 and to the Premier League with Stoke and Aston Villa in 2007/08 and 2018/19 respectively.

Reacting to the game, the BBC questioned whether Rovers' win was the greatest turnaround ever, adding: "There has never quite been a final day like this."

The EFL described it as 'unbelievable', while Sky Sports said the Pirates had done 'the unthinkable', with pundit Jeff Stelling adding that they had 'achieved mission impossible'.