“At the start of the year we didn’t think we’d be making it to an All-Britain final, but here we are.”

The words of captain Johnny McGuigan as he lifted the Graham Fleming Memorial Cup alongside vice-captain Niall Coffey - fittingly the two protagonists, who contributed the telling blows on the score sheet for McCurtains, were there at the very end to hoist the trophy which was sealed in added time by Patrick McGuigan’s close range goal.

The road to Croke Park begins in London for McCurtains, who will host the Ulster champions Blackhill after they too claimed provincial honours at the weekend. 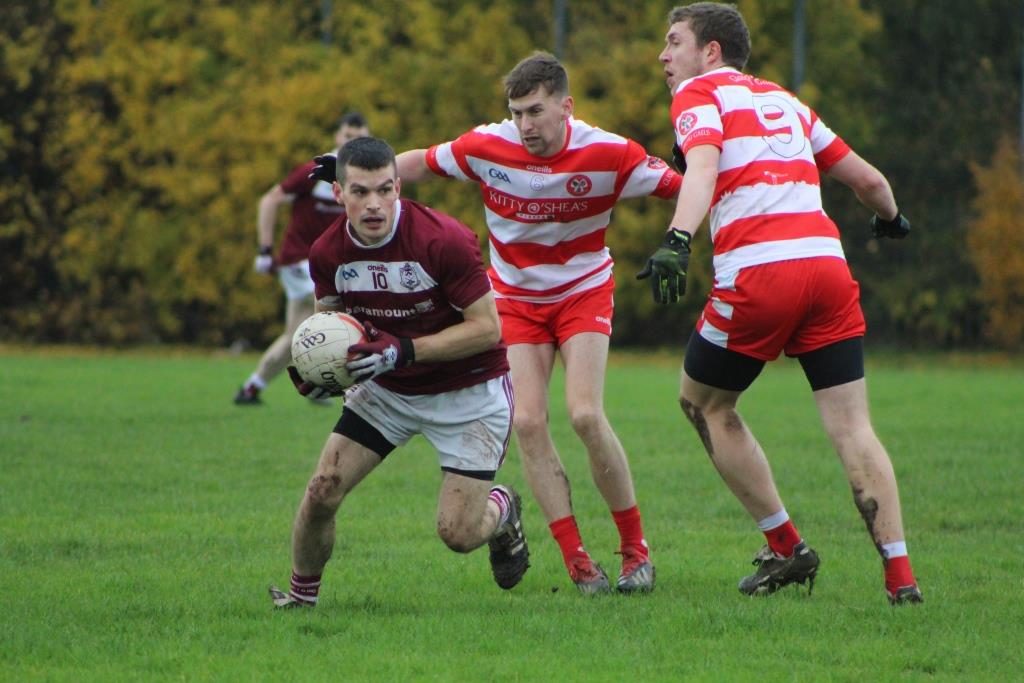 For McCurtains Sunday’s victory over Glasgow Gaels concluded the hard road to provincial success as they had to navigate their way past Oisin and Sean McDermotts just to secure their place in the final at a cold and saturated Pairc Beeston.

Thankfully, the rain relented long enough to ensure that the game could be played but the soft ground ensured this final was one of attrition and patience.

The scoring remained pretty even-handed until the power off the McCurtains bench eventually told, their captain being introduced twenty minutes from time to rejuvenate a half-forward line that had already put in the hard yards to lay the foundation for the team’s success.

Despite going behind to Adrian Dawson’s opener, they fired their first warning shot when John Rafferty flicked a low free towards goal which required a last ditch intervention on the goal line. 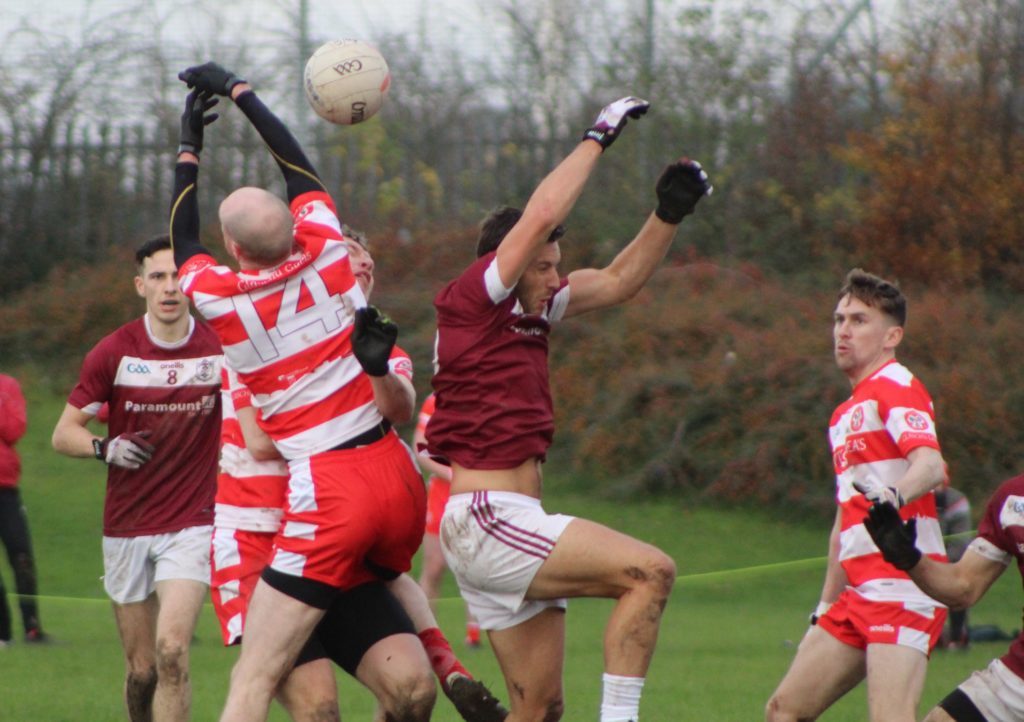 Rafferty then caused alarm in the Glasgow defence with a low ball across the face of goal which required a timely intervention from goalkeeper Paul Ferris but not before Peter Rafferty had levelled matters with a point from the left.

Dawson was the danger man in front of the posts for Gaels in the opening stages, adding two more points from play as Glasgow looked to profit from swift counter-attacks downfield.

At the other end McCurtains were enjoying plenty of possession but were guilty of choosing the wrong option at key moments as Glasgow’s full-back line marshalled by Damian Kellegher remained resolute.

The London side were depending on midfielder Coffey to slot over frees and he made no mistake with three conversions before half-time to ensure his side jogged off one point to the good.

When Denis Greene launched a leveller for Gaels at the start of the second period, it was tempting to suggest that this one could be heading for extra-time.

McCurtains ended the first-half with four wides and a further nine in the second half hour threatened to undo their improving patience in possession.

At the other end there was little for the Glasgow full-forwards to sink their teeth into, Richie Stevenson having their best effort on goal which proved a simple catch for Conor Mulrennan.

With the introduction of McGuigan and full-back Kevin Delahunty, McCurtains finally started to click. 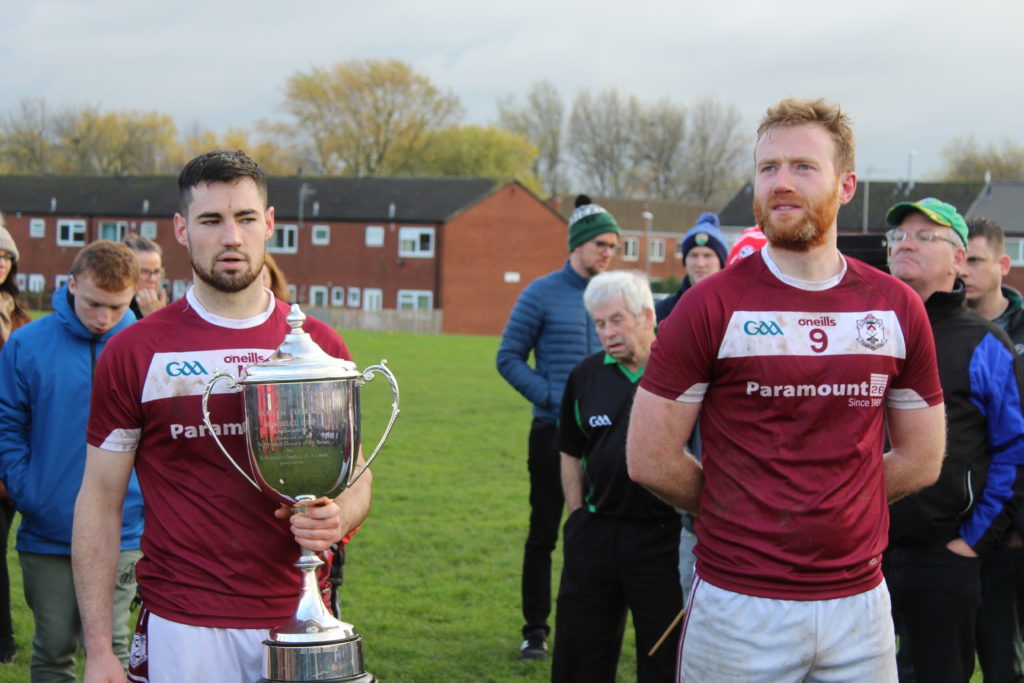 Two frees from Coffey edged them in front and although Ferris denied Delahunty with a fine double save McCurtains kicked for home with two quick McGuigan points.

With time their enemy, Glasgow went for broke but could only muster one further Greene point that was cancelled out down the other end by John Rafferty. With men in red committed to attack, McCurtains rounded off the game through a swift counter-attack finished off by Patrick McGuigan with a simple shot to the net.

Glasgow Gaels, similar to Oisin in the quarter-final, found McCurtains too strong in the final moments but nonetheless it’s been a memorable year for the club in their first provincial final.

For Thomas McCurtains, it’s full steam ahead for the All-Ireland and a game to savour on the weekend of the December 7/8,  which will most likely be played at McGovern Park.

■Silverware was also handed out in Watford on Sunday where the inaugural All-Britain Football Shield was concluded. A competition for county runner-ups, the final saw St Nicks take on Roger Casements and the Gloucestershire club claimed the honours on a score line of 3-8 to 2-7.