The 18-year-old American, son of the legendary George Weah, has quickly impressed fans not only with his skill but also his passion for the club.

Weah has made just five appearances for Celtic, four from the bench, but has scored three goals in that time.

The latest came today as St Johnstone – and in particular keeper Zander Clark – threatened to frustrate the Hoops.

Weah came on after 74 minutes with the game at 0-0 after Odsonne Edouard – only on minutes earlier himself – was injured.

Within minutes the PSG loanee controlled a long ball over the top before teeing up James Forrest for the opener. 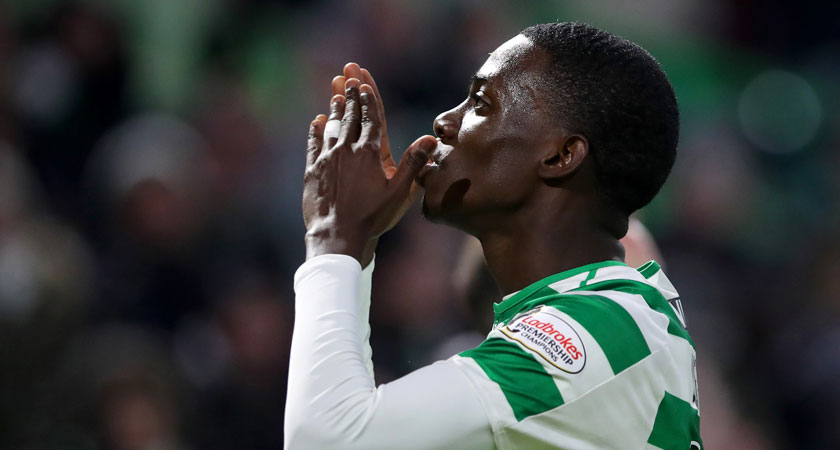 He then got on the end of a Callum McGregor cross after a Celtic counter attack to seal the points.

Brown praised the man-of-the-match for his selflessness in front of goal to set up the opener.

“He comes on, he knows what he needs to do, he’s very, very unselfish,” the captain told Sky Sports.

“Most strikers could have tried to have a shot when they first come on, tried to get a name for themselves, but he’s played in Jamesy.

Weah picked up the Ladbrokes Man of the Match award after coming off the bench to score once and set-up the other-https://t.co/XX0np0vaaF https://t.co/bsDCaw6DIe

“He’s got a tap-in then and got the rewards himself.”

Rodgers meanwhile praised Weah’s maturity as Celtic restored their six-point lead at the top of the table.

“How he came on was absolutely brilliant,” the manager told Celtic TV.

“Great movement – his touch and ball for the first goal was sensational and obviously his movement to get in the box on the counter attack and finish was brilliant.

“For an 18-year-old boy he’s got great qualities and his enthusiasm for the game is so nice to see as well.”

Weah also made one young fan’s day after giving him his shirt as he continues to endear himself to the Celtic faithful.

Timothy Weah loves the Celtic so much his tongue's turning green. pic.twitter.com/0enZYgdNKW

Immense Celtic mon the Weah bhoy Still chuckling at Andy Walker on Edouard getting stretchered off after a late goal line challenge. “If it was outside the box you’d probably get a free kick” so foul then

Weah are the people! pic.twitter.com/waZ9QF6GmE

We should just keep Weah tbh, wit are PSG going to dae, phone the polis?

Weah gets what playing for Celtic is all about! Shows more passion and fight than players that have been here for years!