A former New Zealand captain has suggested an All Blacks victory against Ireland is all but certain during an interview with the Rugby Paper.

Zinzan Brooke, who won 58 caps with the New Zealand national side during the 80s and 90s, failed to mention anything about his country's quarter-final clash with Ireland on Saturday, instead decided to focus on an entirely hypothetical encounter with England in the semis, adding that it's the fixture he "expects".

Despite the fact that Ireland have beaten the All Blacks in two out their last three meetings, and the fact that ahead of the World Cup, Joe Schmidt's side were ranked as the world's best, Brooke still indicated that his focus was on the English instead.

"I do fear the England semi-final," he said.

"If the two teams do meet, which I expect them to, it could come down to a toss of the coin on the day."

Throughout the entire interview, there's no mention at all of the quarter-final. 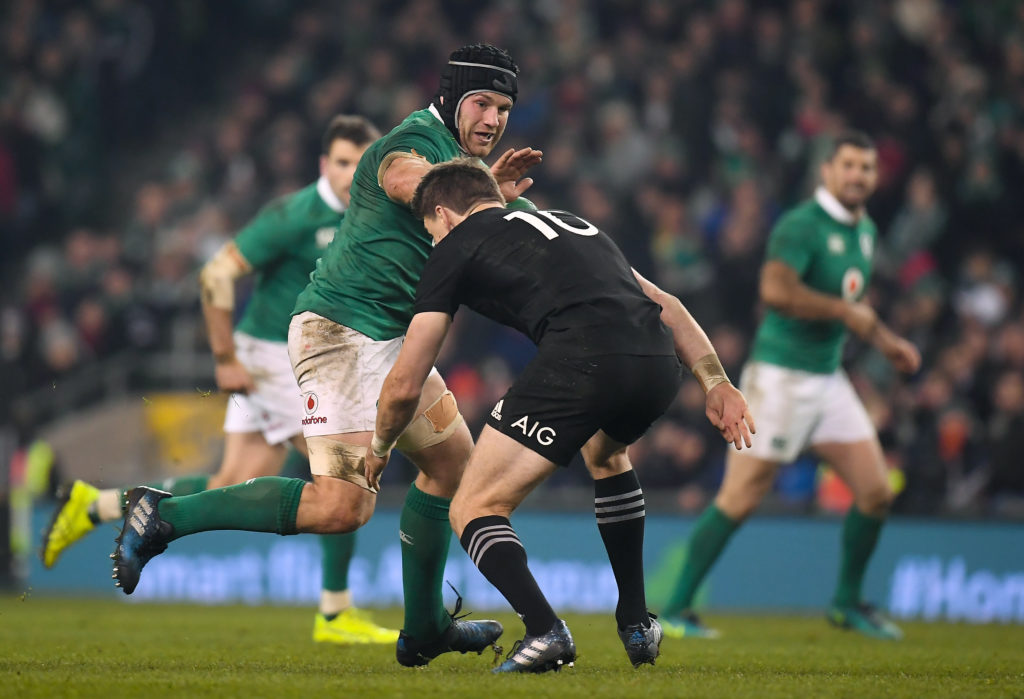 Sean O'Brien of Ireland in action against Beauden Barrett of New Zealand during the Autumn International match between Ireland and New Zealand at the Aviva Stadium in Dublin.

Brooke preferred to talk of his nation's chances of winning the tournament altogether, rather than focusing on the great, green, hulking mass standing in front of him.

Irish confidence is far from sky-high following a sluggish, surprise defeat to Japan last month, but representatives from Ireland have been respectful enough to talk up their opposition for the next round of the World Cup, rather than dismissing them entirely.

Ireland forwards coach Simon Easterby said: "They [NZ] have the ability across the board to hurt you and they’re probably most dangerous when it’s loose and maybe get a turnover and are able to do what they did against South Africa - and go from 3-0 down to a 17-3 lead very quickly.

"Things like that can happen very quickly if you’re not on your game, so we’re fully aware of that. We’ve seen that ourselves in recent games, how dangerous they can be. We know that if you give them a sniff, they’ll take their opportunities," he added.

"They have so many threats across the park. They are a team that ensure you can’t switch off for a minute. They have enough ball players to play certain styles but they also have the ability to play a set-piece game and muscle up. In our phase attack, we have to look after the ball and make sure we don’t give them any soft turnover opportunities.

"Without the ball, we need to be on the money and our set-piece has to stand up. It’s going to be a real challenge for us as a forward pack. Whether it was in Chicago (where Ireland beat NZ in 2016) or the last couple of times, the game is certainly set there in terms of tone."

It appears the tone for Saturday's game has been well and truly set, with Schmidt's men going out there to prove that despite the wobble in Shizuoka, Ireland won't simply lay down for the All Blacks.