WHEN he first met Shane Long, Pat Dolan was told a story that sounded like the one Jimmy Rabbitte delivered in The Commitments.

Just as “the Irish were the blacks of Europe, and the Dubs the blacks of Ireland”, so, Dolan was made aware, the inhabitants of Tipperary were sneeringly regarded as the definition of culchies.

And that was until Gortnahoe, Long’s home town, was mentioned. Bordering Kilkenny, the people of Gortnahoe have become accustomed to regular putdowns from the intelligentsia of nearby Urlingford.

“Yet here we were, last Tuesday morning, and the biggest story from the biggest League in the world was about a young man from Gortnahoe,” says Dolan. “No one can speak disparagingly about Gortnahoe or Tipperary again.”

And for a few hours, Dolan was right. Long, after scoring two superb goals against Aston Villa, was the headline news on every bulletin – from Sky Sports, to BBC Worldwide, to Tipp FM.

Yet the focus wasn’t about where he had come from, rather where he might be moving to.

With his contract up next summer – although West Brom have the power to extend it by a further 12 months – Long has his admirers.

Arsene Wenger is, to some extent, interested. So too are AVB at Tottenham, Brendan Rodgers at Anfield and no less than seven other managers in the Premier League.

Yet there is a sizeable gap between making an enquiry and a multi-million pound bid.

We learnt as much in August when, for all the talk that Lazio and Seville were emptying their piggybanks to bring him abroad, in the end, Hull City, were the only club to lodge a formal offer.

West Brom accepted it too – leaving Long to board a flight to Leeds/Bradford airport where he was met by Steve Bruce at arrivals and whisked off to complete a medical.

And then Steve Clarke, West Brom’s manager, used his power of veto to scupper the move.

“I was in the car with Shane at the time,” says Bruce, who immediately hit the next flyover before heading back to the departure lounge.

It wasn’t the only U-Turn of the night. Romelu Lukaku had decided, after much deliberation, to spend the season at Everton rather than The Hawthorns, setting a chain of events in motion which ended with Long packing and then unpacking his bags.

“Think what that must have done to his confidence,” says Brian Kerr, the former Irish manager. “I mean it wasn’t Barcelona he was being sold off to. It was Hull.”

What hurt even more was what happened next.

Because nothing happened – not at club level, where Nicolas Anelka, Victor Anichebe and Saldo Berahino were initially preferred by Clarke – nor in the international arena, where Noel King, the caretaker boss, opted instead for Anthony Stokes and Kevin Doyle for the double header against Germany and Kazakhstan.

Yet football is a fickle business and the player West Brom wanted to sell in August is now one they are desperately fighting to keep. 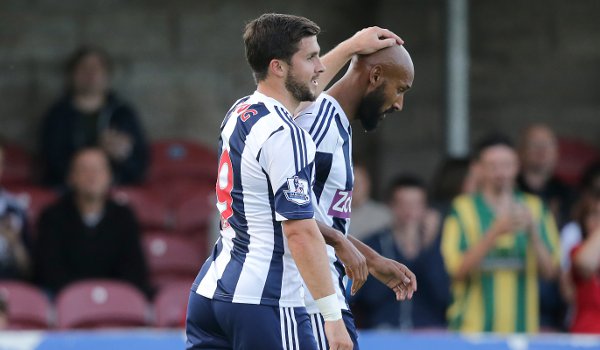 “What happens off the pitch is down to my agent,” says Long. “It’s not for me to talk about.”

The agent – Dolan – is happy to play the long game. A former manager, with St Pat’s and Cork City, he discovered Long – and the Gortnahoe stereotype – in 2004, watching a teenager who had by then featured in two All-Ireland minor hurling semi-finals, play as a sweeper for St Michael’s, his local soccer club.

Dolan converted him first to soccer and then to a striker and had big plans to use him in Cork’s 2005 League of Ireland season until he was controversially sacked before the campaign began.

Within months, Long was off to Reading, where Brian McDermott, then the chief scout and later the club’s manager, eased the bedding in period by giving him use of the spare room in his home.

“He was great around the house,” says McDermott. “My kids are roughly the same age and they got on great. He’d wash the dishes every night, play racquetball with the missus. He was a dream lodger.”

And he’d prove to be a dream player for Reading too, whose £20,000 investment brought about a 325-fold increase.

With West Brom, however, there has been inconsistency. At his best, he has the personality and athleticism to single-handedly occupy a quartet of Premier League defenders – yet when his confidence dips, so too do his goal returns.

In two-and-a-bit seasons in the west Midlands, he has found the net 22 times in 57 starts, mainly scoring in sporadic bursts, yet still those figures represent a reasonable set of statistics for any striker and can be regarded even more favourably for one who plies his trade in a mid-table side whose tactical preference is to operate with just one designated forward.

In this game, though, reputation matters, hence why Anelka – formerly of Real Madrid, Chelsea, Arsenal – earns more than a one-time employee of Cork City and Reading.

All Long wants is financial parity with the men he scores more goals and works harder than.

That is why Dolan has spent the best part of 2013 working hard on his behalf knowing the Irishman’s preference is to stay with West Brom, where he is happily settled, and where he gets on with Clarke.

All of this business talk is a distraction from the real business, though, namely re-igniting the fire at international level.

“The new manager’s arrival has freshened things up with Ireland,” says Long.

“You could see that in his opening two games. We showed confidence in our own ability and we need to repeat that when the qualifiers come around next year because we all know we’re good enough to qualify for a major championship.

“The bottom line is we are not a bad team. With four games to go we were level with Sweden and Austria and then lost twice. Those were the games which cost us.

We need to learn from that as players and it helps the management team we have in place are there to figure out where we went wrong. We deserved to be in the World Cup this year on quality alone. But we didn’t do it in the key games, did we?”

They sure didn’t. Yet since Messrs O’Neill and Keane came along, there is a different tone around the team hotel, a sporting glasnost to replace the sterner, less joyful, Italian regime.

“Allowing the lads time off to go home to their families after training has been pleasant,” says Long. “The lads respect the manager enough not to do anything stupid.

It’s probably a little bit easier going about the team hotel. The gaffer has obviously got his own set of rules and as long as the players stick to them, there will be no problems.

“Martin has that Irish in him and understands how we are as people. But the main thing is that freshness that he brings.

"I want to say I enjoyed playing under Mr Trapattoni and would never say a bad word about him but results weren’t going our way and that little bit of a kick up the backside was what we needed as players to try and impress someone else.

"That new beginning was crucial.”

He marked it with a goal, prior to the couple he hit past Villa. Having O’Neill and Keane on board isn’t the only fresh start in Shane Long’s life.

And January could yet bring about another one.