Despite missing five key players, including goalkeeper Brendan Mulrooney and talisman Adrian Moyles, Kiernans were in front for large periods of the game.

The Gaels were much more competitive than they were when the sides last met – the Senior Championship final – but they were still second best on the day.

Both sides finished the game with 14 men after tempers flared up in the second-half, with Tom Waters (Kiernans) and Adrian Hanlon (TCG) seeing red for their role in a mass scuffle.

Despite taking a two-point lead through Peter Finn and Danny Ryan, Kiernans endured a difficult start to the match as both Mick Donaghue and replacement goalkeeper Conor Campbell succumbed to injury on the damp and mucky pitch two in Tir Chonaill Park.

Matters got worse for the senior champions as TCG strung together four points without reply, three of which came through Liam Gavaghan (two frees).

It was the perfect response from Lloyd Colfer’s men as they soon edged into a two-point lead when Adam Askin added a fourth point from a tight angle after being released by Killian Butler. 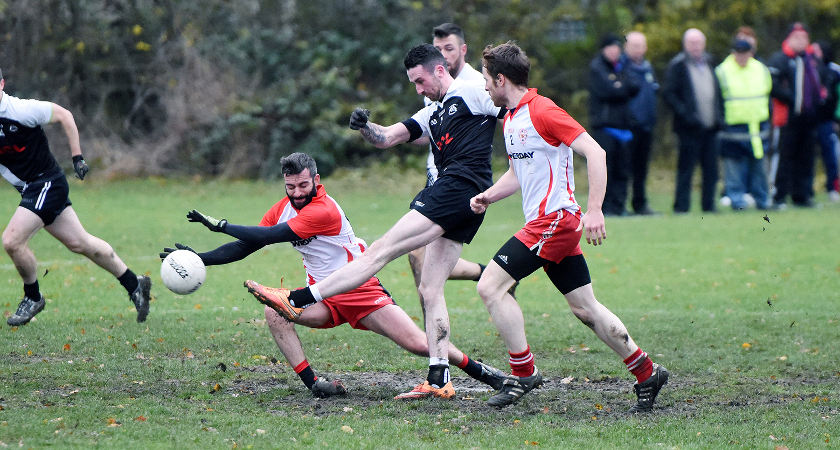 Pitch Two in Greenford was a little worse for wear [Picture: Mal McNally]
Cathal Og Greene snuck a point back for Kiernans before the first goal of the game flew in, Ciaran Carville drilling past Gavin McEvoy in the TCG goal on 25 minutes.

Greene made it three scores without reply for Kiernan with the score of the match moment later, sending over a long range effort from the right flank to cap a fine passing passage of play.

Askin popped over a free for TCG in the last act of the half to send the sides into the break with the score reading 1-4 to 0-5 in Kiernans’ favour.

The first-half was played in a clean, sporting manner, but the same cannot be said of the second period, with the increased levels of aggression evident from the restart throw-in.

Marty McCoy was at the thick of the action, and he moved the Gaels to within a point of Kiernans with a sweetly struck left-foot effort, although that was immediately cancelled out by Michael Callery.

Killian Butler responded with his only point of the match, but TCG were soon picking the ball out of their own net again as Waters capitalised on a misjudgement from McEvoy to palm in from close range on 41 minutes.

When play got underway again moments later, a handful of rash challenges from either side sparked ugly scenes, with both benches having to intervene in a bid to restore order.

Referee Brian Conaghan was keeping a watchful eye on the offenders, though, and duly sent off Hanlon and Waters, who shook hands after being forced to leave the pitch.

With 10 minutes to go, TCG were five points down at 2-6 to 0-7. They desperately needed a goal and their persistence paid off when McCoy got free down the left before cutting in and stroking a pass across the face of goal, where Anthony McDermott lay in wait. He needed two touches, but he drilled in a high finish to make it a two-point game in the closing stages.

Poor decision-making may have cost the Gaels as a string of attacks towards goal broke down, while ambitious shots from distance dropped short.

As it turned out, both sides added one more point each to their respective tallies – Carville for Kiernans and a Gavaghan free for TCG – to take the final score to 2-7 to 1-8.