The island of Ireland’s golf courses offer sporting tests, stunning scenery and a touch of luxury

THE Royal Portrush Golf Course will play host to The 148th Open Championship in 2019.

The event will be the biggest international sporting event ever held in Northern Ireland, with golfers, spectators and aficionadas from every continent making the journey to the north coast of Co. Antrim.

In reality, however, nearly every single top golfer has played this course, one of the world’s very finest.

The club, founded in 1888, has two courses: The Dunluce Links, designed by Harry Colt, and the Valley Links, an 18-hole, par-70 course, both extreme tests of golfing ability.

The Dunluce Links course — where The 2019 Open will take place — is considered to be one of the finest tests of golf anywhere.

It was ranked fourth in the world by Golf World, while Golf Magazine rated it 12th in their list of the Top 100 Courses in the World.

The island of Ireland can lay claim to one third of all the genuine links courses in the world – they’re dotted like diamonds in an emerald necklace along the coast-line.

Four courses – besides the Royal Portrush, Ballybunion, Royal County Down Portmarnock and Royal Portstewart are all ranked inside the world’s top 50.

Royal Portstewart, with stunning views across to the Inishowen Peninsula, hosted the 2017 Dubai Duty Free Irish Open, the 90th anniversary of the inaugural tournament in 1927.

The Royal County Down, Newcastle, some 25 miles south of Belfast, was one of Tiger Woods’ favourite courses when he was dominating the sport. It’s also a regular haunt of Darren Clarke, Padraig Harrington and Rory McIlroy.

But then this is, like the Royal Portrush, one of the stars of global golf. It was originally designed for £4 (that is, four pounds) by Old Tom Morris, a name synonymous with St Andrews. It was a bargain.

The course’s notoriously vicious bunkers are a test for the world’s greatest golfers, while its business-like roughs, bounded by gorse and marram grass, require pin-sharp navigation. 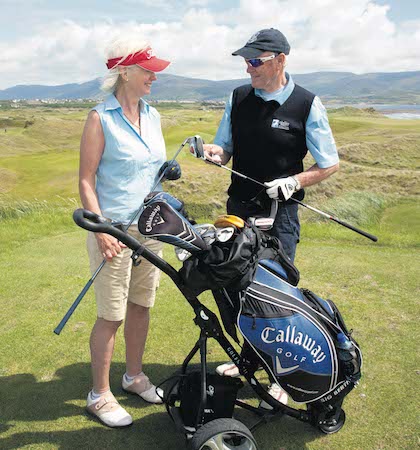 Outside of the top elite of sport, the definition of a golfer is somebody who yells “Fore!”, takes five, and writes down three. Here you might have to double that number – it’s a big challenge.

The island of Ireland also has its fair share of parkland courses — quite different from links courses which always snake along the coast.

The K Club, Straffan, Co. Kildare, is Ireland’s best-known parkland course. Having once staged the 2016 Ryder Cup, this is a club to be reckoned with.

The host to three Irish Opens, it’s home to some fearful bunkers – a trademark of Jack’s designs.

Back on the coast and at Dooks Club, Glenbeigh, Co. Kerry, they’ve been playing the game now across three centuries – since 1889 to be exact, making it one of the oldest golf clubs in Ireland.

Sandwiched as it is between Macgillycuddy’s Reeks and the Dingle Peninsula the one thing Dooks is not short of is a view or two.

Of course, wet weather isn’t unknown here, so the most important club in the bag could be your umbrella.

This is a true links course, and incidentally home to the natterjack toad, an endangered species – so look out as you address the ball.

To play on the island of Ireland’s golf courses doesn’t mean you have to take out a bank loan.

The likes of the immaculate course at Druid’s Glen, Newtownmountkennedy, Co. Wicklow, (often considered the Augusta of Ireland) is offering a round of golf for around €30.

The course offers a veritable smorgasbord of golfing delicacies – bunkers, streams, trees, gorse, and views across the Irish Sea at every turn.

The island of Ireland’s golf courses can offer the most challenging of sporting tests.

But they’re always set in the most spectacular of scenery, and inevitably come with every manner of luxury from spa to swimming pool.

So even if you can’t tell a putter from a mashie niblock, you’re likely to have a splendid time.